As a single department with two majors—one in Spanish, the other in Portuguese and Brazilian studies—our commitment to intercultural studies reaches beyond traditional fields of national literatures, genres and languages to embrace cultural studies, environmental studies, gender and sexuality studies, the arts and more. Our courses encourage students to reconsider traditional notions of identity, nation, geography and culture from integrative and transcultural perspectives. Our curriculum reflects the fact that Spanish and Portuguese are increasingly recognized as domestic U.S. languages. We aim to integrate the heterogeneous languages and cultures we research and teach, from their inceptions on the Iberian Peninsula and in the Americas, to current linguistic and cultural manifestations in Europe, Africa and the Americas (including the United States), the Caribbean, the Atlantic and the Mediterranean.

Presentation of the Honors Thesis in Portuguese and Brazilian Studies

O Olho De Cabra: An Exploration of the Human-Nature Relationship on Reality Television by Ellie Oliver
Centered around two seasons of the American show Survivor and one season of the Brazilian show No Limite, this thesis examines representations of three Brazilian biomes on reality television. By analyzing these shows, the thesis investigates how interactions between humans and nature are represented in pop culture. Refreshments provided.

The department is hosting this semester Neilson Professor Miguel Angel Rosales, a Spanish filmmaker and anthropologist. He will deliver three public lectures, each at 5 p.m. in the Nielson Library Browsing Room: “Submerged Stories,” on Tuesday, February 22; “Surviving Stories,” on Tuesday, March 29; and “A Focus on the Environment as a Source for the Recuperation of Memory,” on Tuesday, April 5. Learn more on the provost’s website.

Two of our students have just been awarded Fulbright Fellowships to Brazil. Taylor Ditmar ’22, Spanish and environmental science and policy, will be an English teaching assistant, and Kelly Lincoln ’21, Spanish and world literatures, will be researching the intersections of dance and translation studies at the Federal University of Santa Catarina. Parabéns, Kelly e Taylor!

Senior Lecturer Emerita Patricia González, with Ivor Miller, edited a critical edition of Lydia Cabrera’s The Sacred Language of the Abakuá, nominated for an Elliott P. Skinner Book Award from the Association for Africanist Anthropology.

Upon graduation our students are able to think critically and to speak, read and write with accuracy at an advanced level in Spanish, and at a low-intermediate level or higher in Portuguese. They have the ability to negotiate diverse academic, professional and social situations in Spanish with high communicative capacity. To this end, most of our classes are held in the target language, as is all student work produced in these classes, including discussions, oral presentations and written work. Our majors are able to identify and analyze a range of forms and styles of cultural expression, including diverse literary genres, visual art, film, performance and drama. Majors graduate with the capacity to think historically, to identify and utilize a variety of literary and cultural theories, to interpret original creative works, as well as develop comparative and interdisciplinary analyses.

Upon graduation, our students are able to speak, read and write with accuracy at a high-intermediate to advanced level in Portuguese and to negotiate diverse academic, professional and social situations with effective communicative capacity. To this end, a number of core classes are held in the target language and engage students in a variety of communication activities, including informal conversation, discussion of authentic texts, presentations, personal essays and research papers. Beyond linguistic competency, majors graduate with a high degree of intercultural literacy, having studied aspects of Brazilian and Lusophone cultures and societies through a combination of humanities and social science perspectives.

Majors, as well as non-majors interested in gaining intensive linguistic and cultural proficiency, are strongly encouraged to go abroad for one semester or one year.

The S/U grading option is not allowed for courses counting toward the majors.

The Major in Spanish

Ten (10) semester courses: Five of them will have the following requirements, to be taken at the Department of Spanish and Portuguese at Smith College:

The remaining five courses will be electives dealing with the languages and cultures of the Spanish-speaking world, offered by or cross-listed with the Department of Spanish and Portuguese at Smith or in approved Spanish language programs abroad. One of these electives can be a class taught in English if it deals with the cultures of the Spanish-speaking world--this includes bilingual or English-speaking U.S. Latinx communities. The English-language class can be taken at Smith or the Five Colleges. SPN 112Y can be counted towards the major as one course. For classes taken abroad, credit will be granted at the 200-level.

The Major in Portuguese–Brazilian Studies

Eight semester courses. POR 100Y or POR 110 and POR 111, or POR 125; POR 200 or POR 215; and one 200-level course in Brazilian or Comparative Lusophone Studies taught in Portuguese. Five other semester courses related to the Portuguese-speaking world, one of which must be at the 300-level. Courses may be selected from any number of fields such as literature and language, history, Africana studies, anthropology, art, dance, music, economics and government.

The Minor in Spanish

Six semester courses in Spanish. Two of these six courses will be the following requirements, to be taken at the Department of Spanish and Portuguese at Smith College:

The remaining four courses will be electives dealing with the languages and cultures of the Spanish-speaking world, offered by or cross-listed with the Department of Spanish and Portuguese at Smith, at Spanish programs in the Five Colleges, or in approved Spanish language programs abroad. SPN 112Y can be counted towards the minor as one course.

The Minor in Portuguese & Brazilian Studies

Five semester courses. POR 100Y or POR 110 and POR 111, or POR 125; POR 200 or POR 215; and one 200-level course in Brazilian or Comparative Lusophone Studies taught in Portuguese. Two other semester courses related to the Portuguese-speaking world, one of which must be at the 300-level. Courses may be selected from any number of fields such as literature and language, history, Africana studies, anthropology, art, dance, music, economics and government.

A Spanish or Portuguese-Brazilian studies major may desire to conduct an independent honors project. Please consult the honors directory to learn more about the requirements.

The department has two abbreviations for the language and culture of three broad areas of study: POR (Portuguese-speaking world), and SPN (Spain and Spanish America). All courses are taught in Spanish or Portuguese unless otherwise indicated. Students with prior Spanish language experience must take the placement test.

In addition to the courses listed in the Smith catalog under SPN (Spanish) and POR (Portuguese), you may search for relevant courses taught in English by our faculty, listed under LAS (Latin American and Latino/a Studies), CLT (Comparative Literature) and SWG (Study of Women and Gender).

The maximum enrollment in all language course sections is 18 students unless otherwise indicated. Also, please note that the S/U option is not normally granted for language classes.

Courses available at Amherst, Hamsphire and Mount Holyoke colleges and the University of Massachusetts Amherst can be found in the Five College Course Guide.

The department’s transdisciplinarity is reflected in the diverse academic affiliations and collaborative relationships that faculty members hold across the Smith campus and the Five Colleges. We work with Latin American and Latino/a studies, Iberian and European studies, comparative literature, Jewish studies, medieval studies, Middle East studies, environmental science and policy, theatre, art, and the study of women and gender, as well as with the concentrations in poetry, translation studies, women's education and sustainable food.

Professor of Spanish and Portuguese

We strongly encourage and support students wishing to spend one or two semesters studying abroad in a Spanish- and/or Portuguese-speaking country. Our students have benefited tremendously from the linguistic and cultural immersion and array of specialized courses offered through approved programs in eleven different countries, including Argentina, Bolivia, Brazil, Chile, Costa Rica, Cuba, Ecuador, Mexico, Peru, Portugal, and Spain.

Students in the Department of Spanish & Portuguese Studies have been recipients of several prizes and fellowships.

This prize will be awarded to a graduating Spanish major for the best senior essay or project in Spanish. Submissions, one per student, may include papers, portfolios or projects in Spanish, completed for courses or special studies during the last two semesters of study, excluding honors theses. Potential applicants should contact Spanish faculty with any questions. See the full description and application information. Submit entries to Lorraine Hedger.

This prize will be awarded to a graduating Portuguese & Brazilian studies major or minor for the best senior essay or project in Portuguese and Brazilian Studies. Submissions, one per student, may include papers, portfolios or projects completed for courses or special studies during the last two semesters of study, excluding honors theses. If interested in being considered for the prize, please see the full description and application information. Submit entries to Lorraine Hedger.

White Pine Press, the Cliff Becker Endowment for the Literary Arts and the American Literary Translators Association (ALTA) awarded Chloe Hill '12 the fifth annual Cliff Becker Book Prize in Translation, which produces one volume of literary translation in English annually. In 2014, with the support of a Fulbright fellowship, Hill traveled to Brazil to work alongside Myriam Fraga translating a selection of poems.

The $32,000 Beinecke Scholarship is offered for the courageous selection of graduate studies in the arts, humanities or social sciences anywhere in the world by undergraduates. Smith is allowed one nominee. Angela Acosta '17 was the department's most recent recipient.

Majors in the department have gone to Brazil, Colombia, Spain, Andorra and elsewhere to pursue research, teaching and other opportunities. See the Smith Fulbright website for more information.

Students are eligible to present an honors thesis.

Spanish and Portuguese department faculty offer advising and support to students who wish to apply for Smith College International Experience Grants, administered by the Office of International Study. These grants provide partial funding toward international projects during interterm or the summer that deepen a student’s academic engagement. Applications for awards of between $250 and $3,500 will be considered, with an average award amount of $1,000.

Prior to selecting a program, students interested in pursuing service learning opportunities abroad are advised to consult faculty advisers along with the website of the International Volunteer Programs Association, paying special attendance to the “Why Standards” and “Volunteer Stories” links. It is especially important to consider issues related to program quality, ethics and safety when participating in international volunteer programs. See the Study Abroad website for more information on funding criteria and application deadlines and procedures.

An aqueduct in Segovia, Spain, provided the inspiration for this photo by Giovanna Sabini-Leite ’21, exhibited in the 2017 Global Encounters Photo Contest. 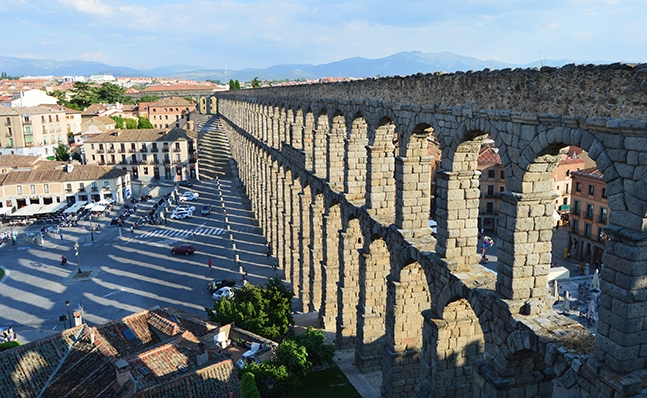 The banner at the top of the page includes several images displayed at random on each visit. Recognition of intellectual property rights is an important component of the academic enterprise. Each of these photos is shared under a license that allows the use of the image. (1) Havana, Cuba, sourced from Pixabay, image 4027210, free for commercial use, no attribution required; (2) 2018 - Mexico - Merida - Monument to the Fatherland, photo by Ted's photos, made available under the CC BY-NC-SA 2.0 license, this image was cropped to fit the display area; (3) Lisbon main square, photo by Deensel, made available under the CC BY 2.0 license, this image was cropped to the display area; (4) CENU, São Paulo, Brasil, made available under the CC0 1.0 license.

Five College Center for the Study of World Languages

Find courses in Spanish & Portuguese at any of the Five Colleges.

Explore the culture, history and economic structures of Latin America, including Brazil and the Hispanic Caribbean.