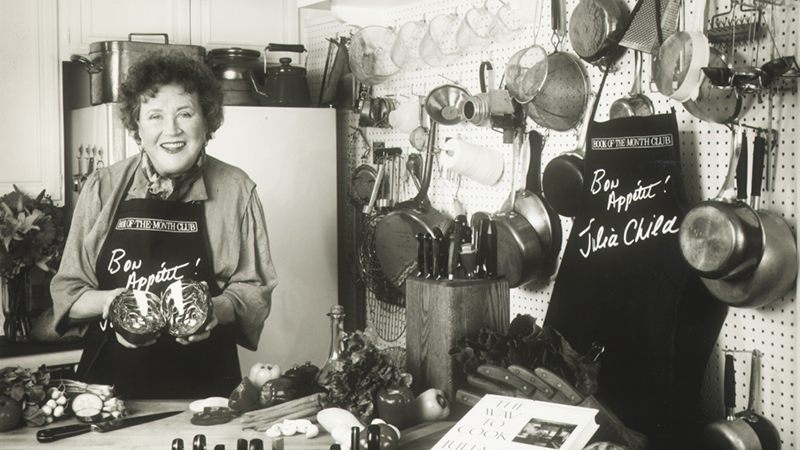 With an annual event that has become a favorite among students, Smith celebrates the passion of alumna Julia Child, class of 1934. Author of a dozen cookbooks and host of the long-running PBS television series The French Chef, Child is credited with changing the way we think about food in America.

Will we be serving your favorite Julia Child dish? Dig in and see what’s on the menu.

Partially funded by proceeds from the sale of her Cambridge home—which she donated to Smith—the Campus Center is an apt tribute to an alum who fostered community, learning and hospitality in all that she did.

The first Julia Child Day, held in 2004, featured a panel discussion, “Julia Child: A Zest for Living,” a celebration of food, pleasure and culture. Various themes since then have included “How Communities Come Together Through Food” and “What I Learned in the Kitchen.”

Using her vast culinary knowledge, Julia Child ’34 revolutionized the way Americans approached food and cooking. Her book Mastering the Art of French Cooking provided aspiring cooks with one of the most accessible collections of French recipes available in English.

Child received the French Legion of Honor in 2000 and the U.S. Presidential Medal of Freedom in 2003. She received honorary doctorates from Harvard University, Johnson & Wales University, Brown University and, in 1985, Smith College.

Child donated her house in Cambridge, Mass., where she had lived from 1956 to 2001, to Smith. She donated her kitchen, which served as the set for three of her television series, to the National Museum of American History, where it is now on display.