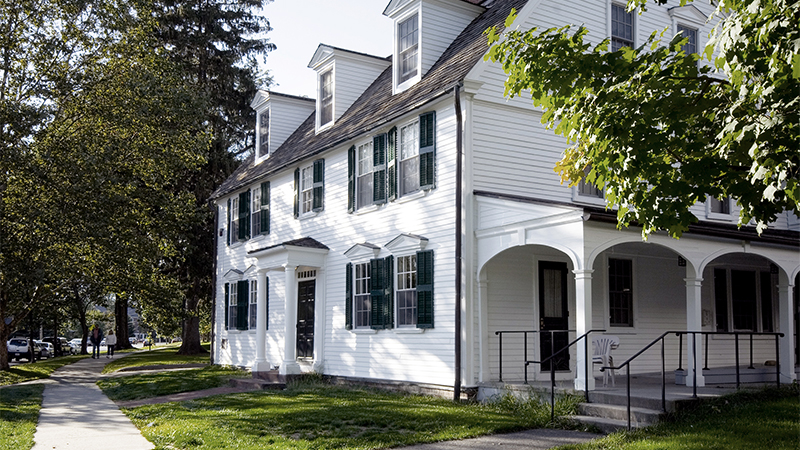 Sessions House, a grand colonial house on Elm Street, is the oldest house on campus. It is also the house with what may be the most intriguing history, boasting both a secret passageway and a pair of lovers.

Built in 1710 by Captain Jonathan Hunt, the house was the first in Northampton to be built outside of the stockade. The staircase was originally designed as a secret passageway used during colonization by the Hunts as a place to hide when Native Americans tried to reclaim their land. It is also said to have been used during the Civil War as part of the Underground Railroad.

Yet the most popular house legend is that the staircase was the site of clandestine visits between Captain Hunt's granddaughter Lucy and Johnny Burgoyne, a British Redcoat held captive in the house during the Revolutionary War. Sessions House is named for Mrs. Ruth Huntington Sessions, who acquired the building at the turn of the century and opened it to Smith students as housing became scarce. She later bequeathed the home to the college, and it has been used as a residence since 1921.

Sessions Annex, next door to Sessions House, was once the White House Inn. It was acquired by the college in 1969, and for a time housed men who were attending Smith on exchange programs.

In 1977, the house was converted into a residence for women. Since that time, the main house and the annex have operated as one house unit.