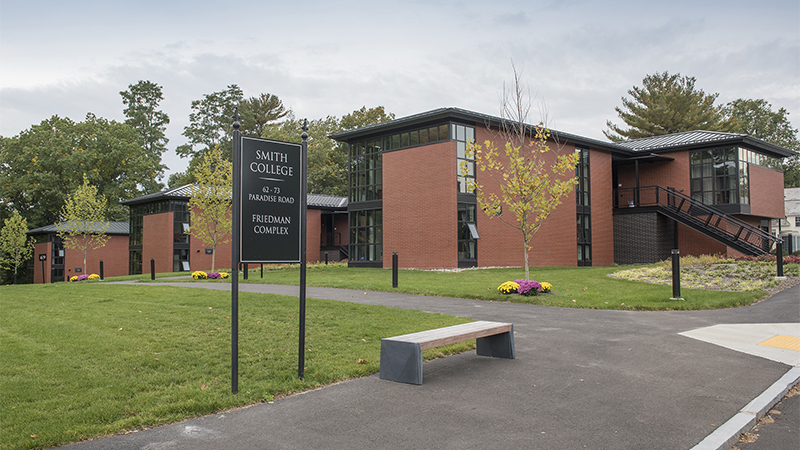 The Friedman apartment complex on Paradise Road, completed in 2016, has 18 four-person apartments. The complex consists of five buildings with four apartments in each building (two apartments on each floor), and four single rooms in each apartment. Two Friedman rooms are reserved for apartment managers.

The houses are named for five pioneering alumnae:

Each house is completely furnished; however, students must provide cooking utensils and cookware.

The original Friedman Apartments were on Henshaw Avenue and opened in 1978. They are named in honor of Robert and Eugenie Friedman (class of 1947), who funded the buildings. On-campus apartments were built in response to requests from students in the 1960s and 1970s for more independent living options.

Students interested in living in a Friedman apartment must complete an individual application (on their Self-Service page) by February 10. You will not select roommates at this time, but do make sure each person in the four-person group you want to live with also submits their individual application on time. If you do not submit a form on time, your group members will not be able to select you as a roommate later on.

More information about next steps in the Friedman application process will be sent out by February 15. You will be able to select your roommates (provided they all submitted their individual application by February 10) at this time.

NOTE: Before considering apartment living, students should communicate with Student Financial Services to determine if and how living in a non-meal plan house will impact their financial aid or grants.