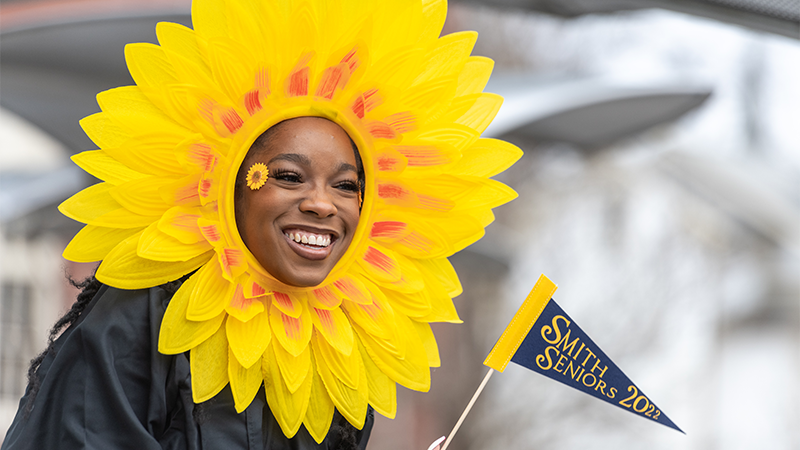 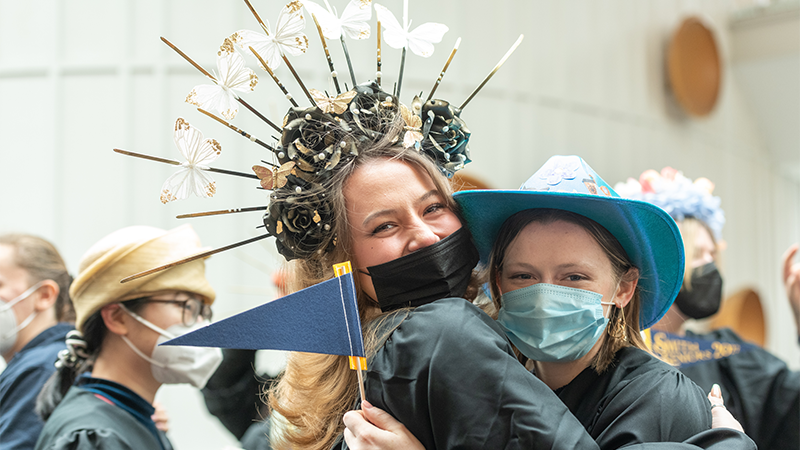 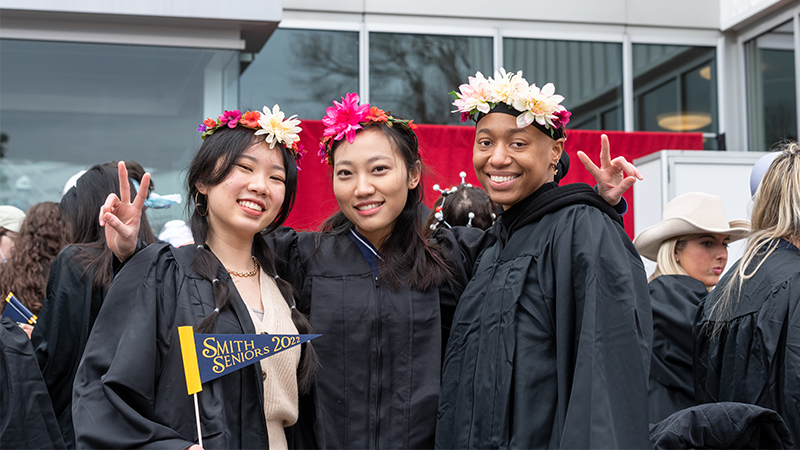 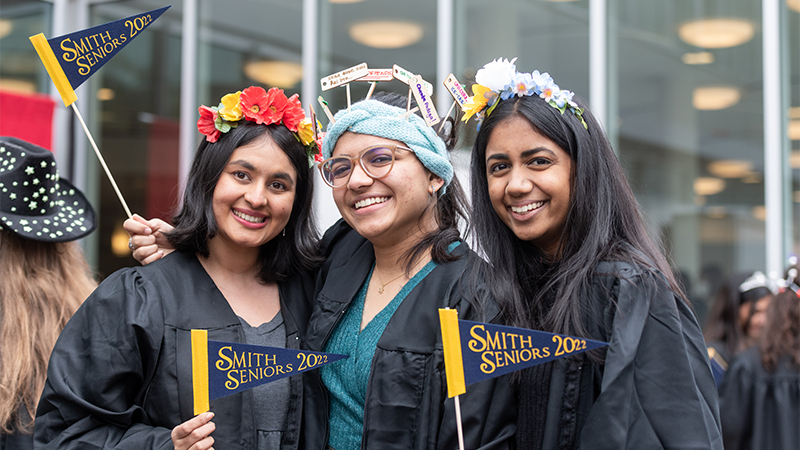 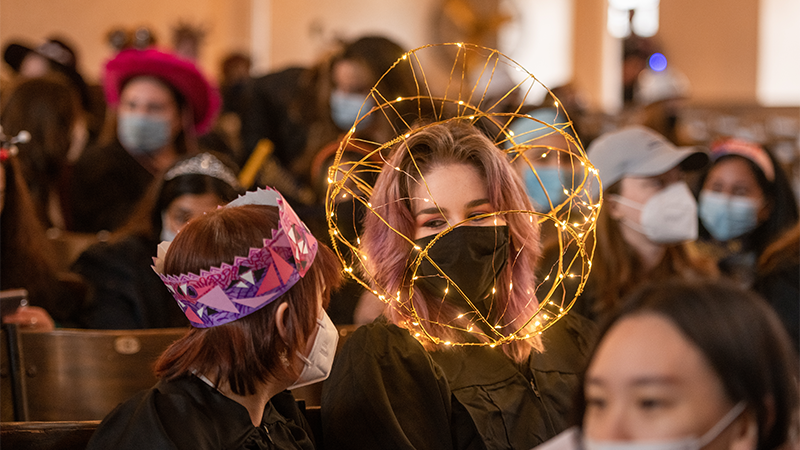 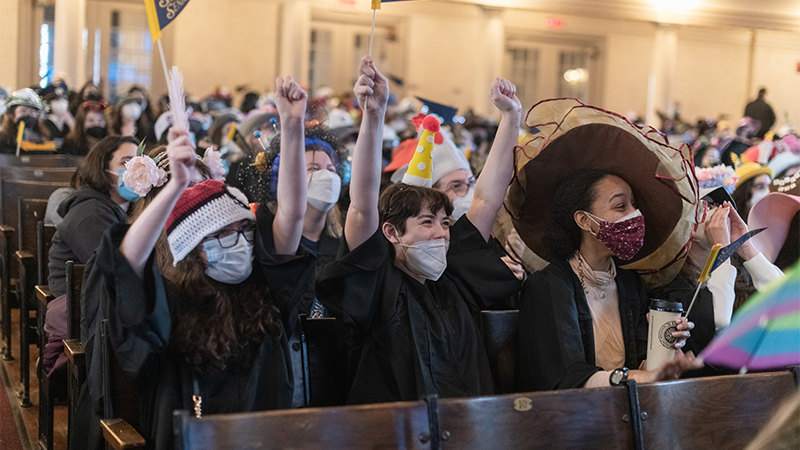 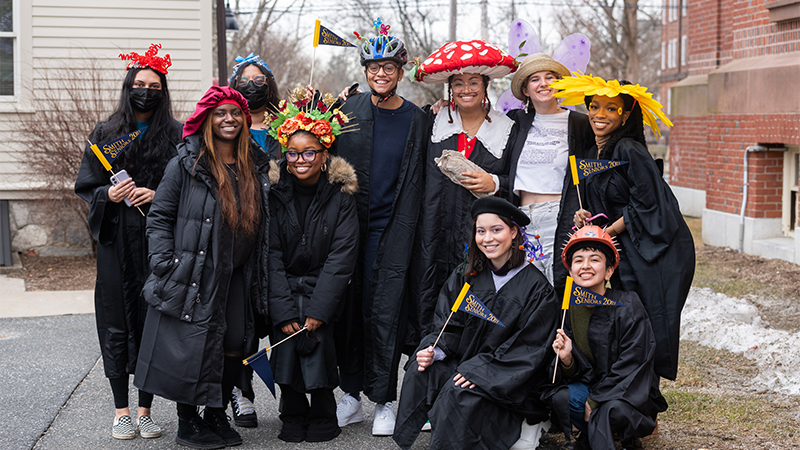 One of Smith’s most enduring and exuberant traditions, Rally Day celebrates the power of the Smith community and the remarkable contributions Smith alums have made to our world. The day is highlighted by a festive all-college gathering at which distinguished alums are awarded Smith College Medals by the president. It is also the first time seniors wear their graduation regalia, often topped with creative hats, as they look ahead to life beyond the Grécourt Gates. 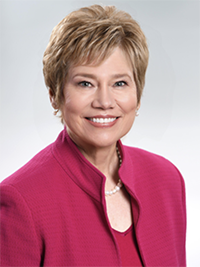 Public health leader
Kathleen E. Toomey ’73, M.D., M.P.H., was appointed commissioner and state health officer of the Georgia Department of Public Health in March 2019, and within a few months was leading the state’s public health response to the COVID-19 pandemic. An epidemiologist and board-certified family practitioner, Dr. Toomey has worked in public health within the U.S and in many parts of the world, including Peru, Somalia and Botswana with the Centers for Disease Control and Prevention and other health organizations. Dr. Toomey earned a bachelor’s degree in biology from Smith and her M.D. and M.P.H. degrees from Harvard University. As a Pew Health Policy Research Fellow at the Institute for Health Policy Studies at the University of California, San Francisco, she studied the first known cases of HIV/AIDS and initiated an Urban American Indian HIV prevention and screening program. In Kotzebue, Alaska, Dr. Toomey served as clinical director of the Alaska Native Hospital and identified a high rate of chlamydia among Alaska Native women, resulting in the first chlamydia screening and prevention programs in Alaska. 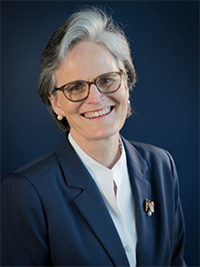 Higher education leader, author, adventurer
Victoria (Tori) Murden McClure ’85’s remarkable achievements are a portrait of her passions: groundbreaking athlete, adventurer, policymaker and higher education leader. In addition to her degree from Smith, she holds a master’s from Harvard Divinity School, a law degree from the University of Louisville and a graduate degree in writing from Spalding University. She has served as a chaplain at a Boston hospital and—in Louisville, Kentucky—as director of a women’s shelter, policy assistant in the mayor’s office, and head of development at the Muhammad Ali Center. She is also a woman of many “firsts.” McClure was the first woman and first American to row solo across the Atlantic Ocean, ski to the geographic South Pole, and climb the Lewis Nunatak in the Antarctic. Since 2010, McClure has served as president of Spalding University in Louisville, expanding the campus by 40% during her tenure. She is a former vice chair and interim chair of the NCAA—the top governing body in collegiate athletics, and, from 2002 to 2010, she sat on the Smith College Board of Trustees. 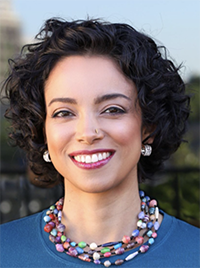 Social justice leader, grassroots organizer
Vanessa Daniel ’00 is the founder of Groundswell Fund, a 501(c)(3), and Groundswell Action Fund, a 501(c)(4), both of which have been top funders of women of color–led social justice organizations in the U.S. Under her leadership, Groundswell moved $100 million to the field, centering grassroots organizing led by women of color and transgender people of color. Its breakthrough model featured supermajorities of women of color movement leaders and grassroots organizers on its staff and boards of directors. Daniel has worked in social justice for 25 years as a labor and community organizer, freelance journalist, researcher and funder. Her writing has appeared in The New York Times and the San Francisco Bay Guardian, among other publications. Through her innovative leadership and vision, she has transformed the world of philanthropy. In 2017, The Chronicle of Philanthropy named Daniel one of 15 influencers changing the nonprofit world, and Groundswell received the National Committee of Responsible Philanthropy’s Impact Award for smashing issue silos. A lifelong champion of Reproductive Justice, Daniel is a recipient of National Network of Abortion Funds’ Abortion Action Vanguard Award. 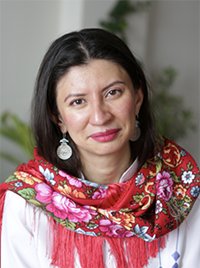 Human rights advocate
A native of Afghanistan, Shaharzad Akbar ’09 is a pioneering human rights activist dedicated to political issues related to her country and her generation. She was the first Afghan woman to complete postgraduate studies at Oxford University, where, in 2011, she earned a master’s in philosophy as a Weidenfeld scholar. Akbar has written for countless international and Afghan media, including the Washington Post, Newsweek, Al Jazeera and CNN. Though currently in exile, she tirelessly continues to advocate for the people of her country through her human rights work and writing. She was most recently chair of the Afghanistan Independent Human Rights Commission (AIHRC), the national human rights institution of the Islamic Republic of Afghanistan—the presidential republic that ruled from 2004 to 2021 before the Taliban takeover. The AIHRC was dedicated to monitoring human rights and investigating human rights abuses. Akbar has also served as deputy on the National Security Council for Peace and Civilian Protection and country director for Open Society Afghanistan.

NOMINATE AN ALUMNA   CONGRATULATE A MEDALIST

Given annually by the Student Government Association, the Faculty Teaching Award recognizes and rewards distinction in teaching and professors’ ability to connect to students, both in and outside of the classroom. The award was established more than 20 years ago as a way for students to thank educators for their support, encouragement and inspiration. Each year students are encouraged to submit nominations to the SGA Curriculum Committee through written and other creative forms of expression.

The Elizabeth B. Wyandt Gavel Award

The Elizabeth B. Wyandt Gavel Award is given annually to Smith staff members “who have given extraordinarily of themselves to the Smith College community as a whole.” Established in 1984, the Wyandt Gavel Award is administered by the Student Government Association, which solicits nominations from students.

Caps and gowns will be available for purchase at the Smith College Bookstore. More information will be sent out about this in early January.

Those receiving financial aid have the option of participating in the Regalia Loan Program lottery offered through the Student Government Association. All students will be invited to enter the lottery in January and will be notified in early February as to whether they can receive regalia through this program.

Only students who receive Smith aid and are verified through Student Financial Services are eligible to enter the lottery. Questions regarding this program should be directed to the SGA office at sga@smith.edu.

The Smith College Medal has been awarded to outstanding alumnae at Rally Day since 1973. The medalists have become an important part of the program, speaking prior to convocation in classes and afterward in conversations with students.

The origins of Rally Day can be traced to a series of annual celebrations of George Washington’s birthday, the first of which was held at Smith College in February 1876. These celebrations evolved from social dinners or receptions into daylong college events. The addition of a “rally” to the day in 1894 was eventually reflected in the name Rally Day, first used in 1906. The celebration is still held annually in February but has evolved from a patriotic commemoration to a convocation.

Over the years, students have sponsored and participated in various activities: rallies, debates, basketball rivalries, dramatic presentations, singing and dancing (at first only square dancing was allowed; the waltz was introduced 20 years later).

The current tradition of sponsoring an event to benefit a charity began in 1918 when the Rally Day Show was held to raise funds for the Smith College Relief Unit serving in World War I France. It was not until 1943 that a woman—Denise H. Davey, vice chair of the Fighting French Relief Committee—was invited to speak at the commemoration exercises. For several years, the president has chosen Rally Day to announce the upcoming commencement speaker.

Dress at Rally Day has evolved as well. In 1944, the senior class began wearing its graduation caps and gowns to the convocation. The day still marks the first time the seniors publicly wear their gowns. In recent years, however, the caps have been replaced by inventive hats of the students’ choosing (and sometimes of their own making), in keeping with the “rallying” and spirited nature of the day.