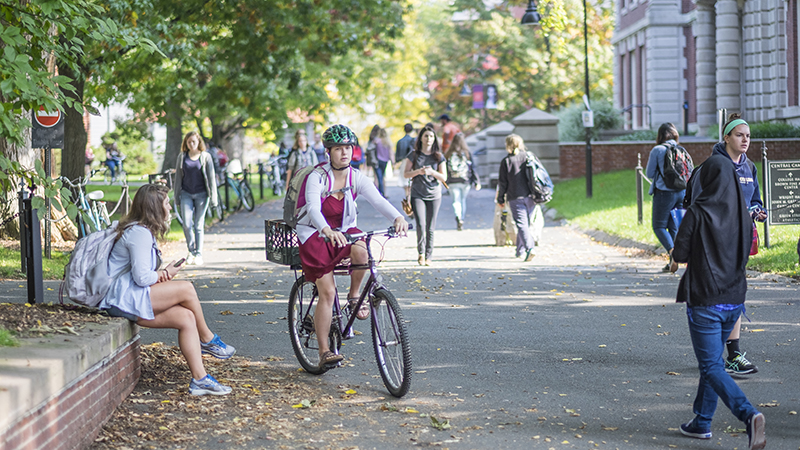 The Smith College Campus Safety Department offers a variety of services to assist the community. Have an idea for a service that you would like to see? Please contact us and share your feedback.

In accordance with Massachusetts General Law Chapter 269 Section 10j, weapons are prohibited on the grounds of the college with the exception of law enforcement officers duly authorized to carry such weapons. No person shall be permitted to carry firearms or other weapons, concealed or not concealed, with or without a concealed weapon permit, while on properties owned or controlled by the college.

For the purposes of this policy, the term “weapons” includes, but is not limited to, firearms of any nature or description, including shotguns, rifles, pistols and revolvers, paint ball guns, or BB/pellet guns; firearm replicas; ammunition; martial arts-type weapons; explosives (including fireworks); bows, crossbows, arrows; slingshots; switchblade knives, double-edged knives, hunting (pocket-style) knives with a blade length of three inches or greater; swords; pointed metal darts; (unauthorized) pepper spray; or any other destructive device or instrument that may be used to do bodily injury or damage to property. In addition, items that may be used as weapons, whether or not they fit the definition above, will be subject to seizure.

Because these weapons may pose a clear risk to persons and property on the campus, violation of the regulations may result in administrative action from the college and/or prosecution under the appropriate state or federal laws.

The primary function of the Bicycle Registration Program is to provide identification for bicycles stored on campus.

Affix the bicycle registration decal to the bar underneath the bike seat, as if it were a license plate number, as soon as you receive it to avoid forgetting to do so. It helps to clean and dry the area before affixing the decal.
REGISTER YOUR BICYCLE

Why Register Your Bicycle?

To Discourage Theft and Identify Your Bicycle

The information on the bicycle is kept on file at the campus safety department for several years, so even if a student has graduated and something happens to their bicycle, we will be able to provide them information on their bicycle if they cannot locate its serial number, etc. Additionally, the sticker identifies the bicycle as belonging to someone who is at Smith College, so if it is located by a law enforcement agency, they will contact the college and therefore the bicycle is more likely to be returned to its owner.

To Prevent Its Removal From Campus

Unregistered bicycles and those registered to students who have graduated are considered abandoned and are removed at the end of each academic year in order to make room for new bicycles being brought to campus. Storage space on campus is very limited, and removal of bicycles no longer being used is vital to assure that there is space for new bicycles. There is not a limit on the number of bicycles a person can register while they are on campus; however, to be fair to other bicycle owners, members of the community should have no more than two bicycles stored on campus at one time so everyone will have room to store their bicycles.

The occurrence of bike theft (and of bike parts such as seats and quick release wheels) is higher in urban areas and on college campuses due to the numbers of bikes and the length of time during which those bikes may be left unattended. Take a few simple steps to protect your bike.

If Your Bike is Stolen

Often, improperly secured bikes may be “borrowed” by people who might think it may be a “community bike”—it may be located elsewhere on campus. Try looking on campus or report the theft to campus safety.

Smith College campus safety can provide fingerprinting services for required applications and security clearances for members of the college community free of charge.

Important: Have all of your fingerprint cards filled out as completely as possible prior to your arrival. Plan to arrive promptly at the scheduled time. Do not sign the fingerprint cards until advised to do so by us.

The safety department is able to provide lockout services for students, faculty, staff and visitors. Lockout services will only be provided to the person assigned to the space being opened, or for the person who is the owner of a vehicle being unlocked.

In order to protect the privacy and security of our community, we are unable to open a space or vehicle without the assigned person or owner present. If there is a specific need to gain entry to a residential space, the requestor should contact the office of residence life. If it is an academic space, the requester should discuss their needs with the department responsible for that area.

Laptop engraving is offered as an added security measure to help identify your laptop and help discourage theft.

Smith College safety vehicles contain an array of equipment to better serve the Smith College community. Some of this equipment includes battery starter kits and lockout kits. After the calling party fills out a release of liability form, officers will be more than happy to assist someone with jumpstarting their vehicle. If you have locked your keys in your vehicle, officers will assist you with that as well. If officers are unable to get your car started or are unable to retrieve your keys, campus safety dispatch has a list of local companies who may be able to assist further.

Campus safety can provide transportation for students to and from Cooley Dickinson Hospital (CDH) and Baystate Urgent Care on King Street for emergency/urgent medical needs. As officers might be handling other situations on campus, students might need to wait until an officer is free to transport them. If the student needs immediate transport, they should call 911 for an ambulance.

If students have scheduled medical or dental appointments, they need to make arrangements for transportation to get to the appointment. Below are a list of options students can use:

Campus safety can also provide transportation for on campus students to the Schacht Center if they have an appointment and are feeling ill. The same applies that if campus safety is responding to an emergency on campus, the student might have to wait a period of time before being transported.

Campus safety also provides safety escorts for students on campus. If a student feels unsafe walking on campus for any reason, they should contact campus safety for a ride. As officers might be handling other situations on campus, students might need to wait until an officer is free to transport them.