Maggie McCoy ’22 published an opinion piece, “The problems with the U.S. foster care system,” in LancasterOnline in June. McCoy, who is majoring in English language and literature, writes, “we should work to support state-level initiatives to assist low-income families and implement stricter policies for separating children from parents.”

Nancy Bradbury ’74, professor emerita of English language and literature, and Sam Intrator, Elizabeth A. Woodson ’22 Professor of Education and Child Study, received 2021 Honored Professor Awards in June at Smith’s commencement ceremony. Bradbury, a member of the faculty since 1987, “has helped shape the intellectual and curricular landscape of the college,” said President Kathleen McCartney in her remarks. Intrator—a co-founder of Project Coach and a Sherrerd teaching prize recipient—“has inspired many of his students to become teachers” through his passion for urban education, McCartney said. 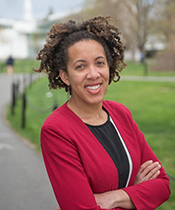 ← Kris Dorsey, assistant professor of engineering, has been awarded the Smith College Presidential Award for Mentoring, which honors the work of faculty who have engaged in extraordinary outreach activities to underrepresented groups. Dorsey’s award will support hiring student research assistants to interview Smith students about their experiences to help develop a blueprint for future mentoring efforts.

Steven Goldstein, Sophia Smith Professor Emeritus of Government, is co-author of “The Ambiguity of Strategic Clarity,” a commentary published in June in War On the Rocks.

Alicia Grubb, assistant professor of computer science, is the recipient of a $174,361 grant from the National Science Foundation for “Representing and Merging Diverse Goal Models in Requirements Engineering.”

James Lowenthal, Mary Elizabeth Moses Professor of Astronomy, was among the participants in a July 16 virtual press conference hosted by the American Astronomical Society and the National Science Foundation to discuss findings from the Satellite Constellations 2 workshop.

Sarah Mazza, assistant professor of geosciences, is the recipient of a $75,000 Sloan Foundation fellowship to support her research in earth system science. Mazza is studying the correlation between the release of water from volcanoes in the Pacific Northwest and tungsten isotopes to advance scientific understanding of plate tectonics. 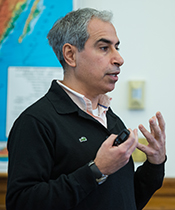 ← Suleiman Mourad, professor of religion, is the historical adviser for CNN’s “Jerusalem: City of Faith and Fury,” airing Sundays through August.. The program tells the story of “one of the most controversial cities in history” through six epic conflicts and rivalries.

Kevin Shea, professor of chemistry, and Halley Lin-Jones ’22J have been awarded a $5,000 grant from the American Chemical Society for a summer undergraduate research project, “Synthesis of Strained Heteroatom-containing Cyclic Alkynes Using an Intermolecular Nicholas Reaction.” Lin-Jones will continue her work in the Shea lab this fall as part of her honors thesis.

Loretta Ross, associate professor of the study of women and gender, gave the keynote lecture, “Calling in the Calling Out Culture: A Pathway Forward,” in July for the “EYE TO EYE” exhibition at WaterFire Art Center in Providence, Rhode Island.;

Smith’s Global Illumination 2020 has been awarded two Circle of Excellence Awards from the Council for Advancement and Support of Education. The program won a gold award in the “Alumni Engagement on a Shoestring” category and a grand gold award in the “Digital Communications/Social Media” category. The judges praised Smith’s virtual Global Illumination as a unique idea and “a great way to pivot and ensure a long-standing tradition continued, while keeping alumni connected.”

Gatean Davis ’14 is the new executive director of the Maine Democratic Party. A native of Maine, Davis served as regional field director for the Maine Senate Democratic Campaign Committee and was finance director for Maine House Speaker Sara Gideon’s run for the U.S. Senate. Davis majored in anthropology at Smith.

Nina Palmer ’07 is a senior fellow at the Center for American Progress. Palmer has joined the center’s National Security and International Policy Team and will lead the Asia Team’s work on U.S.-China policy. Palmer majored in East Asian studies at Smith and earned a master of arts degree in Asian studies at Georgetown University.

Inkoo Kang ’06 is the new TV critic for The Washington Post. A veteran culture writer and critic, Kang previously worked at the Hollywood Reporter and Slate. Kang, who was named best TV critic by the Los Angeles Press Club, majored in comparative literature at Smith and earned a master’s degree in that subject from the University of California Los Angeles.

Laura Hagg ’90 is the new city manager for Frankfort, Kentucky. Hagg, who majored in history at Smith, earned master’s degrees in public service administration from the University of Colorado Denver and in international development from George Washington University.

Kate Cronin ’87 is the new chief brand officer for Moderna, Inc., a biotechnology company. Cronin previously served as global CEO for Ogilvy Health, where she founded the Ogilvy Women’s Health Professional Network. She earned a degree in biological sciences at Smith.

Judge Heidi Brieger ’79 has been appointed to a five-year term as chief justice of the Massachusetts Superior Court. Brieger serves as the court’s regional administrative justice for civil business in Suffolk County and is chair of the Superior Court Education Committee. She majored in American studies and government at Smith and earned a law degree from Boston College.

Janice Majewski MAT ’75, is the recipient of an Award for Distinguished Service to Museums from the American Alliance of Museums for her more than three decades of work on diversity, accessibility and inclusion at the Smithsonian Institution. Majewski founded the Smithsonian’s accessibility program and is currently director of inclusive cultural and educational projects for Human Centered Design. At Smith, she earned a master’s degree in education of the deaf.

Cynthia Ann Telles ’74 has been nominated to serve as U.S. Ambassador to Costa Rica. Telles, a professor of psychiatry at the University of California Los Angeles, majored in psychology at Smith and earned a doctoral degree Ph.D. in clinical psychology from Boston University. She was appointed by President Barack Obama to the White House Commission on Presidential Scholars and the National Advisory Council on Substance Abuse and Mental Health Services. Telles’ late father, Raymond Telles, was appointed a U.S. ambassador by President John F. Kennedy.

RT @CitizenWald: So, let me call your attention to the Sylvia Plath collection @smithcollege -- 26.75 linear feet of writings by & about Sy…