Democracies Through the Lens of the Liberal Arts

With presidential colloquia by influential thought leaders, as well as lectures on the fight for racial justice and art exhibitions on America’s political landscape, the college’s Year on Democracies initiative promises a comprehensive exploration of what President Kathleen McCartney called “notions of democracy around the world.”

“The Year on Democracies is an important and visible way that Smith will focus its curricular and co-curricular resources on questions that lie at the heart of the liberal arts,” McCartney said in a message to the campus. “Examining what we mean by ‘democracies’ has never seemed more compelling nor more urgent.”

Events of the past year, both in the United States and abroad, point to the need for a deep intellectual dive into the global and historical aspects of democracy, according to Alex Keller, professor of film and media studies and director of the Kahn Liberal Arts Institute, one of several campus partners helping to organize the program. “If ever there was a moment to think and reflect together about democracy—the idea, as well as the governmental, organizational, philosophical, and ethical concept—it is now,” she said. “Democracies, and democratic ways of thinking, have revealed themselves to be as fragile as they are robust, a fact that is true well beyond the United States.”

The idea for the democracies initiative has its roots in the college’s successful Year on Climate Change, said Keller. “I saw how the Year on Climate Change had been so generative,” she said, “and though climate change is the single biggest issue of our age, the fragility of democracy worldwide is next—and, in some ways, is inextricably linked with getting a handle on climate change.”

To facilitate the development of democracy-related courses, programs, and events, President McCartney allocated nearly $100,000 in Innovation Grants with the goal of inspiring faculty, students, and staff to explore the topic “through the lens of every aspect of the college’s offerings.” So far, more than 50 courses in disciplines across the curriculum—including art history, woodcut printmaking, engineering and computer science—are focusing on various aspects of democracy. As part of another presidential initiative, Humanities and Social Sciences Labs, Keller started a democracies lab in which students conducted research into what student involvement might look like. Networks among student and other organizations on campus have developed to generate student-led programming. This work will continue through the academic year, Keller said. 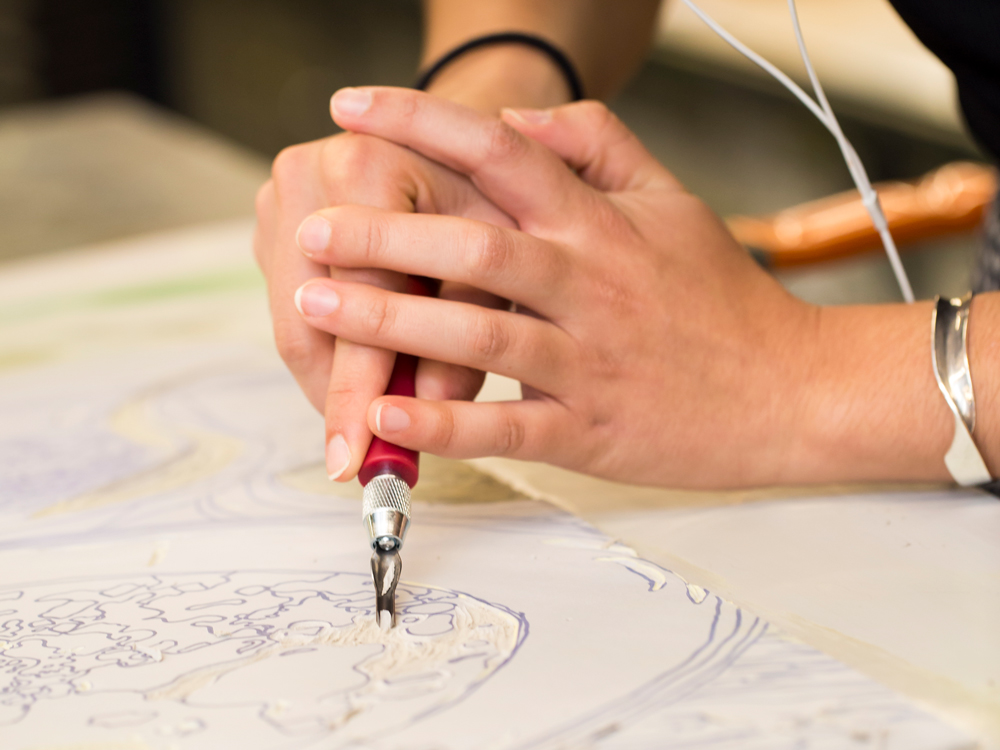 “Woodcut Printmaking” is one of the courses associated with the Year on Democracies.

Keller notes the long history of activism and community engagement at Smith and considers the Year on Democracies to be another way of including as many constituents as possible. The intent, she said, is not to sound democracy’s death knell, nor to assume its perfectability, but rather “to look at how we can really make it true and real for everybody—not just at the voting booth but as a daily life practice.”

The Year on Democracies had a soft launch in the spring, but officially kicked off on September 8 with a presidential colloquium featuring Nancy Pelosi, speaker of the U.S. House of Representatives. “It was a fantastic way to start,” said Keller. Student projects are also in the works. More events will be added as the year progresses, including those in which alumnae can participate.

“Making sure that people are involved in ways that make sense to them is very important,” Keller said. “We want everybody to feel like there is something there that matters to them.”

A sampling of events, exhibits, and projects related to Smith’s Year on Democracies.

LaTosha Brown, an award-winning civil rights and voting rights activist, is the keynote speaker for this year’s Cromwell Day celebration on Thursday, Nov. 4.  Her address on “Reimagining American Democracy” is at 1:30 p.m. in John M. Greene Hall for students, faculty and staff participating in the college’s asymptomatic testing program.

In a Presidential Colloquium after receiving an honorary degree at Smith College tonight, House Speaker Nancy Pelosi urged Smith students to have the confidence to contribute to their communities, their country and the world.

Activist Carol Jenkins—co-president and CEO of The ERA Coalition and the Fund for Women’s Equality, sister organizations dedicated to the passage and enactment of the Equal Rights Amendment—will give a Presidential Colloquium at 5:30 p.m. Tuesday, Sept. 21, in Sage Hall at Smith College. (Please note updated date, time and location.)