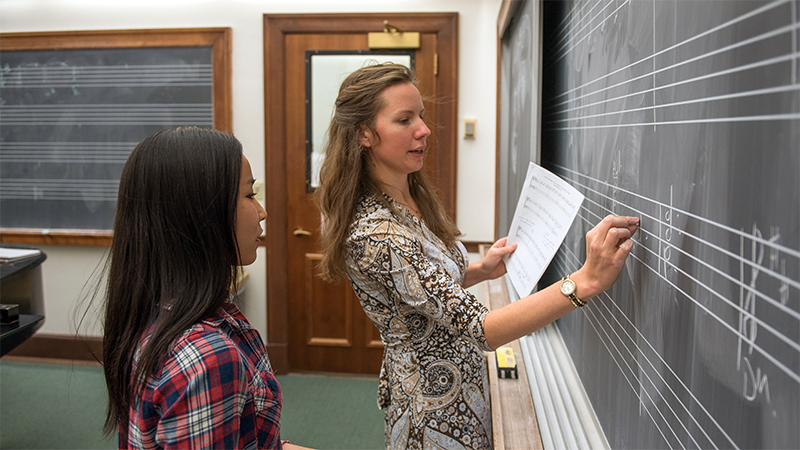 The department offers an exciting, diverse array of courses each semester. Classroom courses feature topics in music history and literature, ethnomusicology, theory, composition, popular music and more. Performance studies include courses taught on the nature and execution of music performance, as well as weekly private voice and instrumental lessons.

Other courses that are not covered by one of these five categories may be counted toward the major on a case-by-case basis, with special department approval.

In world music and in American music, 101 and 105 or 106, respectively, may be substituted for an additional classroom course above the 100 level.

Students who are contemplating graduate work in any branch of music should consult an appropriate member of the department for advice in selecting suitable elective courses. Students interested in graduate work in music are urged to acquire some knowledge of German, French or Italian (for studies in the Western tradition) or of a relevant foreign language (for studies beyond the Western tradition).

With the approval of the department, students may substitute one 4-credit Special Studies for one of the six additional classroom courses in the major.

The S/U grading option is not allowed for courses counting towards the major, with the exception of ensembles that are graded S/U, that can be applied to the performance requirement.

Music Major with a Concentration in Performance

Majors who intend to pursue graduate studies in performance may, before March of their junior year, seek via audition before a department committee admission to the concentration in performance, which consists of enrollment in MUS 940y and the preparation of a full recital during the senior year.

Advisers: Members of the department

Six four credit semester-length courses, including the basis (102, 110, 202) and three additional classroom courses of which at least two should be above the 100 level (excluding fundamentals). Students may be exempted from courses required for the basis of the minor as a result of Advanced Placement exams or departmental placement tests. Such exemption does not affect the number of courses required for the minor. The S/U grading option is not allowed for courses counting toward the minor.

A GPA of 3.5 in classroom courses in music through the end of the junior year; a GPA of 3.3 in courses outside music through the end of the junior year. Honors students will fulfill the requirements of the major, will present a thesis or composition (430d or 431) equivalent to 8 credits, and will take an oral examination on the subject of the thesis. The thesis in history or cultural studies will normally be a research paper of approximately 50 pages. The thesis in composition will normally be a chamber work of substantial duration. The final grade (highest honors, high honors, honors, pass) will be calculated as follows: thesis (60 percent); grades in music (20 percent); performance on the oral examination (20 percent).

Examination
Students will take an oral examination on the subject of their thesis.