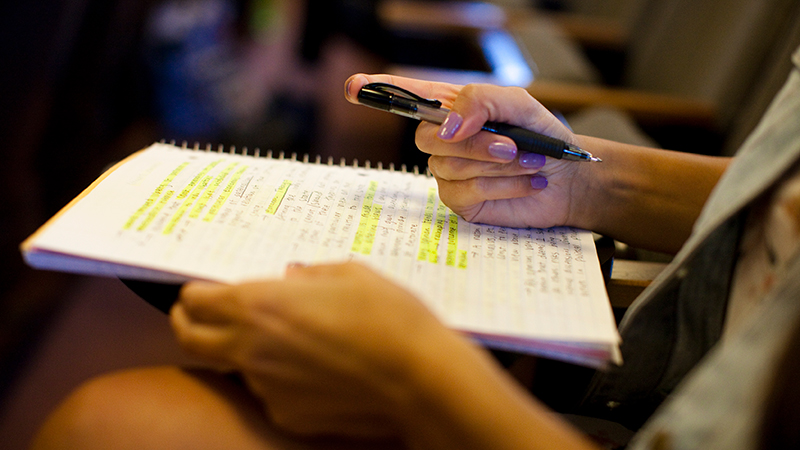 The requirements for a major in English aim to provide majors with a broad understanding of literatures in English, acquaint them with the key questions and intellectual strategies that shape the discipline of literary study, and offer them the opportunity to work independently at an advanced level.

I Major in English with a Literature Emphasis

II Major in English with a Creative Writing Emphasis

We also ask students to develop a deliberative plan for their major in consultation with their advisers, to be revised and updated every semester. Students may if they wish design a special focus within the major by choosing three courses related by genre (such as poetry, fiction, drama), historical period, methodological approach, or any other category of interest.

Please see this advising checklist as you plan your major (or minor).

One course in a foreign literature, taught in the original language, may count toward the major. While only one course in creative writing may count toward the ten required courses for the literature emphasis, we encourage majors with interests in creative writing to choose additional courses in this area. Only one elective first-level course (e.g., ENG 125, ENG 135) or one FYS taught by a member of the English Department may count towards the major. ENG 118 does not count. We strongly recommend that all students take at least one historical sequence: ENG 200, 201; ENG 202, 203; or ENG 231, 233, 235.

No course counting toward the major may be taken for an S/U grade.

How to Declare Your Major

How to Find a Major Adviser

The first step in declaring your English major is to find a major adviser. You can ask anyone who is a member of the core faculty in the English department to serve as your adviser. It could be someone you know, with whom you have taken a course. However, any regular member of the department (professor, associate professor, or assistant professor) can be your adviser, even if they have not taught you. It’s okay to ask! We welcome new advisees! And it is part of our job to be advisers. On rare occasions, if someone has too many advisees, or is about to go on leave, they may decline, and you may have to ask someone else. If you cannot find anyone, please consult the chair of the department.

The minor in English consists of six courses to be distributed as follows: two gateway courses (ENG 199, and either ENG 200 or 231); three additional English courses (no more than two of which can be writing workshops) chosen in consultation with the minor adviser; one 300-level seminar in literature. Only one elective first-level course (e.g., ENG 125, ENG 135) or one FYS taught by a member of the English Department may count toward the minor. No course counting toward the minor may be taken for an S/U grade.

Search the Smith College Course Catalog for current course offerings. You can also find courses within the Five Colleges.

Applicants to honors must have a GPA of 3.50 or above in the courses they count towards the English major, and an overall GPA of 3.33 or above in all other courses by their junior year. During the senior year they will present a thesis, of which the first complete formal draft will be due in the third week of the second semester. After the readers of the thesis have provided students with their evaluations of this draft, the student will have time to revise her work in response to their suggestions. The final complete version of the thesis will be due after spring vacation, to be followed during April by the student’s oral presentation and discussion of her work. See our section on honors for more information.