Rowing for the Gold

BY Christina Barber-Just
2020 Paralympic hopeful Hallie Smith ’16 never intended to become a rower. But after losing the use of her legs, she gained a sport that made her a champion. Photo: Leah Fasten

It’s 6:15 a.m. in the Brighton neighborhood of Boston, and Hallie Smith ’16 is ready to hit the water.

In the parking lot of her apartment building she transfers herself from her wheelchair to the driver’s seat of her car, an electric-blue Hyundai Sonata with a Smith Rowing bumper sticker and a vanity plate that reads “PROFX”—a reference to Professor X, the paraplegic Marvel Comics character who uses a wheelchair.

Smith folds her chair, heaves it into the passenger seat of the car and, because she doesn’t have the use of her legs, uses specially installed hand controls to make the five-minute drive to the Community Rowing Inc. (CRI) boathouse on the banks of the Charles River. After stretching, slathering on sunscreen on this bright late-May morning and gathering her rowing gear, she speeds down a ramp to the dock where her boat is waiting and where her coach prepares to begin the day’s two-hour practice session.

An elite para rower, Smith has been a member of the U.S. national rowing team since 2017. Classified as PR1, meaning she rows predominantly with her arms and shoulders, she won the bronze medal in the PR1 women’s single sculls at the 2018 World Rowing Championships in Bulgaria and, with a time of 9 minutes, 18.5 seconds, holds the 2,000-meter indoor rowing world record for PR1 women ages 19–49. At press time she was set to compete in the 2019 World Rowing Championships in Austria—the main qualification regatta for the 2020 Summer Paralympics in Tokyo, where she hopes to medal. 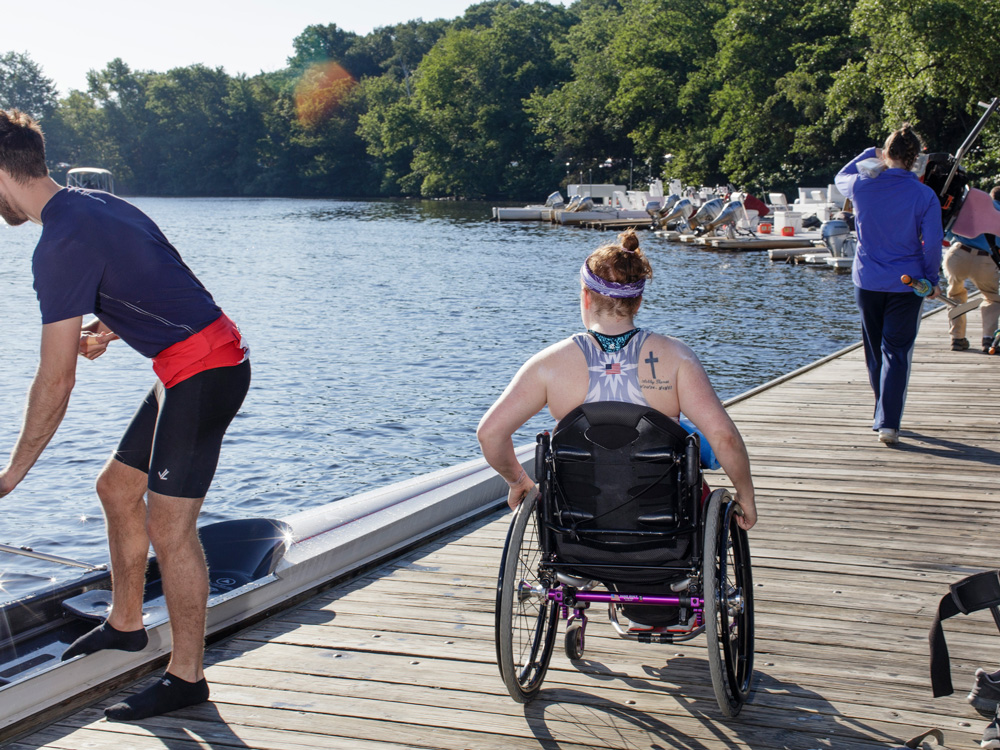 Her medal accomplishments are impressive, but what’s surprising is that Hallie never rowed for the Smith crew team; in fact, she never rowed at all during her years at Smith. Instead, she discovered competitive rowing in a completely unexpected way. While in college, she learned that she had been born with a rare neurological disorder called hereditary spastic paraplegia (HSP), which is characterized by progressive weakness and stiffness—spasticity—of the legs. Although she was a self-described “clumsy kid” who was “terrible at sports,” her symptoms didn’t truly manifest until age 20, when her gait began to change. “I walked like I had cerebral palsy: feet turned in, on tiptoes, knees bent,” she recalls. “I was also falling.”

Then, at the very beginning of her junior year, on the afternoon of Convocation, Smith woke up on the floor of her room in Lamont House; she had had her first seizure. She spent the rest of the day in the emergency room. More seizures followed, and her hip, knee and ankle joints gradually—and painfully—locked up. By Memorial Day, her legs were completely paralyzed. And no one knew why.

The answer finally came during a two-week outpatient stay at the Mayo Clinic in Rochester, Minnesota, while Smith was on a medical leave from college. She was diagnosed with HSP and told by neurologists that she likely would not walk again. She kept a stiff upper lip, saying only that the news made for “a rough day.” As she says now, “I’m pretty chill being paralyzed.”

Laura Rauscher, director of the Smith College Office of Disability Services, which helped Hallie navigate her senior year in a wheelchair, says there’s power in knowledge. “The pathway to getting a diagnosis is rarely a direct one,” Rauscher says. “It’s almost easier once people know what’s going on, because then you can make that shift to ‘OK, this is my life, this is who I am, and I’m going to deal with that and figure out what it means to be a disabled person in the world.’ Once you cross that line, you start building again. That’s what Hallie did. And that’s what sports did for her.”

Smith found rowing almost immediately after graduating—just one semester late—with a degree in psychology. She was living with her parents in Washington, D.C., and going to the MedStar National Rehabilitation Hospital for physical therapy and exercise classes when a MedStar rowing coach urged her to try a rowing machine, or ergometer. As she told USRowing, the national governing body for the sport of rowing in the United States, in a 2018 interview, “After erging once, I was hooked.” 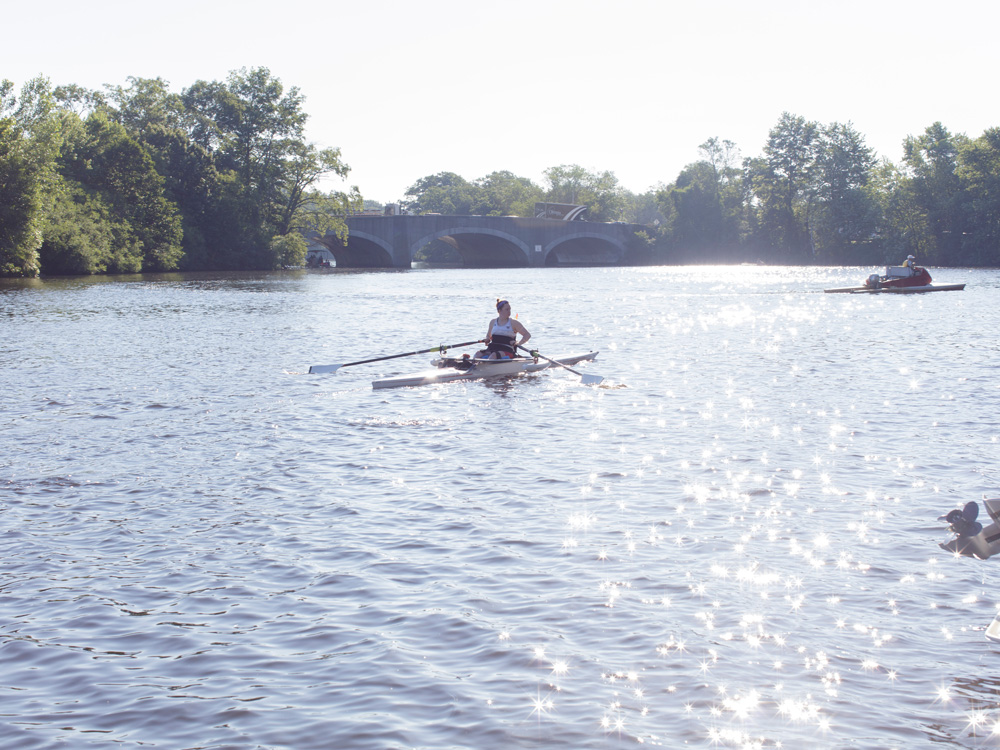 A year and a half later, Smith tried out for the U.S. national team—and made it. One of her current coaches, Beth Noll, wrote in an email, “Fortunately for me, I didn’t have any athletes competing in the same boat class that year—because Hallie went out there and killed it on the course. She was an unknown at the time—no one really knew anything about her or what to expect from her.

They know now. Tom Darling, senior director of national para programs at US- Rowing and a former Olympic rower, says Smith “definitely ramped it up very quickly. ... She is one of the top PR1 athletes in the world, and she’s done that because of her own commitment to becoming a better athlete and really learning,” he says. “If you go to Smith College you’ve got to be pretty determined, pretty smart, pretty capable. Hallie is all those things.”

Darling and others applaud Smith’s recent move to Boston to train with CRI’s Para High Performance Group of Paralympic-eligible athletes. In April, CRI was designated by USRowing as the country’s first national training center for rowers with disabilities.

The move suits Hallie: She has a Smithie roommate, Erin Halling ’16; she works part time for CRI as a rowing coach and intake specialist; and she receives funding from the nonprofit Boston Rowing Federation in addition to support from USRowing, the National Rowing Foundation and the U.S. Olympic Committee. She has also become an honorary member of the Smith College crew team, and recently returned to campus to speak at a conference on inclusion and diversity in athletics.

There’s no cure for HSP, but Smith’s disorder has been stable for three years, and she’s been seizure- free for five. She takes nonnarcotic pain medications and anticonvulsants, and a pump surgically implanted in her abdomen delivers the muscle relaxant baclofen directly to her spinal canal, reducing spasticity. Physical therapy, stretching and exercise also play vital roles in her treatment.

At 7:10 a.m. on this late-May morning, Smith pushes her 21-foot racing shell away from the dock and into the current of the Charles River. The intensity of her effort is clear as she nails her drills, correcting her stroke and perfecting her form according to her coach’s instructions. “I really feel crew saved my life,” Smith says later, “because it gave me something to care about. It gave me something to focus on. It gave me a feeling of accomplishment and purpose that I didn’t have before.”

This story appears in the Fall 2019 issue of the Smith Alumnae Quarterly.

Christina Barber-Just is the associate editor of the SAQ. She rowed for Holy Cross in college.

Sibyl Brown ’14 became passionate about food justice while a student at Smith and founded the Smith chapter of the National Food Recovery Network, which continues today. As an alumna, she continues to work for food equity and wants to clarify some misconceptions about who exactly is going hungry in America.