In The Saddest Words: William Faulkner’s Civil War, Michael Gorra, Mary Augusta Jordan Professor of English Language and Literature, embarks upon an unflinching reexamination of Faulkner’s life and literary works through the troubled legacy of the Civil War.

Widely acclaimed, the book was named a New York Times Notable Book of 2020. Gorra is a prolific writer. His 2012 book, Portrait of a Novel: Henry James and the Making of An American Masterpiece, was a finalist for the Pulitzer Prize for Biography, and his essays and reviews have appeared in The New York Review of Books and The Atlantic, among other publications. Not surprisingly, Gorra is a lifelong book reader. Here, he discusses a few personal favorites—those that have made a difference to him as someone who embraces the wonder and wisdom that can only be harvested from a book.

MY FAVORITE BOOK AS A CHILD 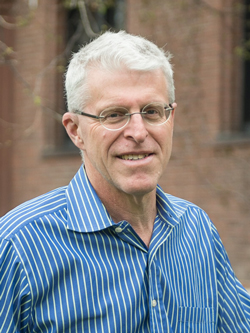 It’s a toss-up between whatever book of Greek myths I first got at our local public library and The Bobbsey Twins’ Adventure in the Country, by the nonexistent Laura Lee Hope—the name the Stratemeyer Syndicate used for that series. I’m going to go with the Bobbsey Twins. It was under the Christmas tree when I was in second grade. I read it the next day, and it introduced me to the pleasures of series fiction. There were over 50 Bobbsey Twins books and I read most of them, even though the twins themselves exasperated me, they were so good. People were always offering them some kind of reward, usually cash, and they always said no. But turning those pages was wonderful, and I pretty quickly moved on to the Hardy Boys and Tom Swift and the Happy Hollisters as well. They were all run by Stratemeyer, and their anonymous standardized production more closely resembled an assembly line than it did the writing of actual novels. I loved them.

A BOOK I WISH I HAD WRITTEN

I’m not going to name one of my favorite novels here. Those are inconceivable. But Virginia Woolf’s A Room of One’s Own has everything I want in a work of criticism. It is beautifully written and deeply learned, sly, wise, passionate, personal, provocative, subtle when it wants to be and bold when it has to be, a book with more questions than answers. She doesn’t pretend to be objective—her first-person voice is a part of her argument, a part of her story. And in this book the story and the argument really are as one; it’s an astonishing job of narration.

Or at least the one I reach for most often. It’s a museum catalog for an exhibit called Americans in Paris, 1860–1900, which I saw at the Museum of Fine Arts, Boston, in 2006. It’s got John Singer Sargent’s Madame X on the cover, and a lot more of him inside, but the reason I grab it is that it’s the perfect size. I use it as a writing tablet whenever I’m going over a bit of hard-copy manuscript, sitting in my favorite chair, book on lap, paper on book, pen in hand. And then when I’m done, I look through it again and think about walking in the Luxembourg Gardens.

THE ONE BOOK THAT OPENED MY MIND THE MOST

Rita Mae Brown’s Rubyfruit Jungle. When I was a college first-year in the mid-1970s I took a class called The Nature of Deviancy whose real topic was the social construction of identity. I was a pretty narrow-minded kid—I mean, I’d been a football player. But my section was taught by Vicky Spelman, for many years now a member of Smith’s philosophy department, and it completely shattered any idea I had about what was “normal” or “natural” in human society. I’ve singled out Rubyfruit Jungle, but really that whole course stands out as a model of what education should be.

WHAT I READ AS A GUILTY PLEASURE

I’m not sure about the guilt, except for that of the characters … It’s a predictable English professor vice, but I do read an awful lot of crime fiction. Not much new stuff, but Raymond Chandler and Ross Macdonald, Elmore Leonard, British Golden Age detective novels; Margery Allingham is my favorite there. Georges Simenon. And oh, detective novels set in Italy—Andrea Camilleri, Michael Dibdin, books where the food is good. And ones that I’m in no way responsible for and don’t need to make sense of, but that I can let just carry me along. I’m never any good at figuring out who did it, and by now I’ve given up trying.

Naomi Miller, ‘The Power to Change the Canon’: Naomi Miller, professor of English language and literature and of the study of women and gender, shares insights from her novel on early modern women authors.