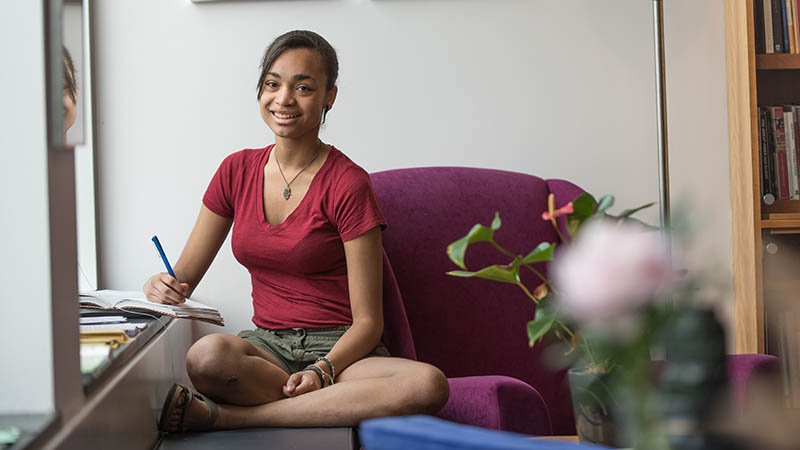 Since 1997, The Poetry Center at Smith College has been devoted to promoting poetry within our vibrant campus as well as the wider New England community. Now officially named The Boutelle-Day Poetry Center, our ambitious reading series brings both internationally known writers and exceptional emerging poets to Smith College each year, and we’re committed to finding dynamic means of deepening our connections to the diverse world of contemporary poetry and the possibilities of the written word. 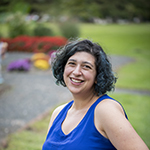 Blackburn earned a bachelor’s in English from the University of Massachusetts Amherst and a master’s in poetry from the University of Arkansas. Twice selected for Best New Poets (2014 and 2016), her work appears in The Massachusetts Review, Indiana Review, The Common and Subtropics, among others. “There’s something about poetry that satisfies the puzzle player in me. Word play makes me shout and clap my hands. I love quiet poems, too—poems that are (on the surface) about nothing, poems that make readers see that what appeared to be a dead end is actually a door to a larger, stranger world.”

From the very beginning students have played a vital role in The Poetry Center. During the academic year there are usually between eight and 10 students working in various capacities, from producing, publicizing and coordinating readings to compiling poet biographies and taking photographs of world-famous poets when they visit campus for a reading.

History of the Center 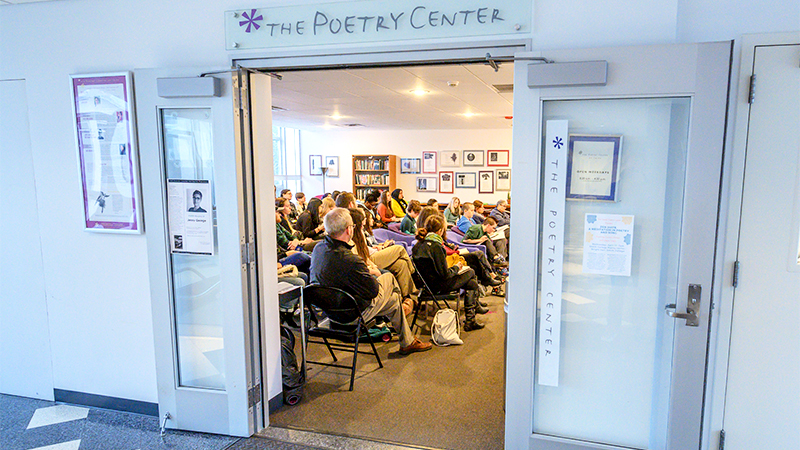 Launching her “2020” program in 1996, Smith College President Ruth Simmons called on everyone to “Dream big dreams!” Annie Boutelle, a lecturer in English, knew what she longed to see at Smith—a poetry center. With colleagues’ encouragement and assistance from senior Meredith Martin, Boutelle fleshed out the dream: a director, student interns, public readings, a video archive and outreach to schools.

In September 1997, Eavan Boland packed Wright Auditorium to its seams for the Poetry Center’s inaugural reading.

Poet Elizabeth Alexander agreed to take on the directorship of the center for her two-year stint at Smith. Alexander brought with her a wide, embracing idea of what poetry is: a range of people with different politics, poetics, values, backgrounds, ethnicities, sexual orientations and styles. Alexander set the tone: This was to be a vibrant, energy-filled center, celebrating poetry in its many shapes and guises.

When the center hired Ellen Doré Watson as director in 1999, she picked up Alexander’s arms-wide-open policy and added the presence of international poets whose work is read both in the original language and in translation.

Audiences have continued to build over the years, ranging from 75 to 2,000, even surprising the poets. Lawrence Ferlinghetti reported it was the longest line that he had ever seen for a book signing. Stanley Kunitz counted his Smith reading as one of the three best he had ever given, and Mary Oliver had tears in her eyes when beholding the crowd in John M. Greene Hall.

In fall 2020, The Poetry Center at Smith College became The Boutelle-Day Poetry Center at Smith College, a name that honors our founder Annie Boutelle and memorializes alumna Tammis A. Day AC ’05, whose foundation’s transformational gift will allow us to bring more poetry to the Smith community and beyond. This event was marked with a reading by the celebrated poet and former U.S. Poet Laureate Tracy K. Smith.

Every gift helps, whether to fund a visit by a far-flung poet or to support our outreach activities, video and library collection or student staff. Donate online or make checks payable to Smith College and mail to The Boutelle-Day Poetry Center at Smith College, c/o Gift Accounting, Stoddard Annex, 23 Elm Street, Northampton, MA 01063. Thank you for your generous support!