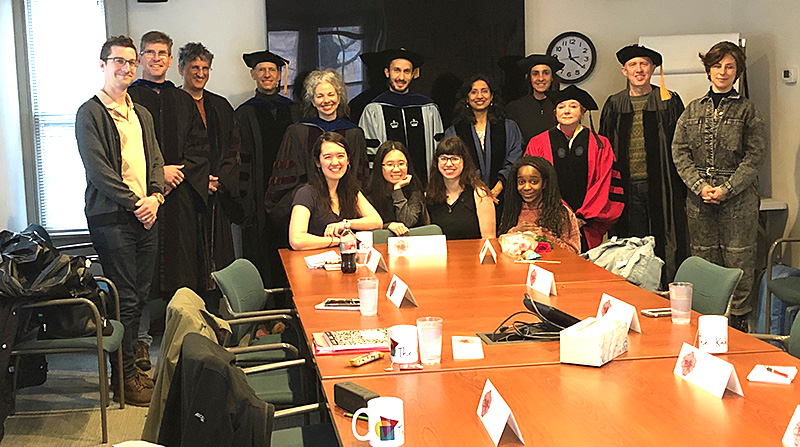 The Kahn 2019-20 project Fear hosted an anticipatory graduation celebration for Student Fellows in early March during a weekly colloquium at the Kahn Institute before students departed campus. The Kahn projects Fear and TranslationS have continued weekly seminars online this month. 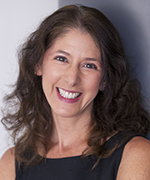 A Time for Change.

It has been a spring. By the vernal equinox, on March 19, we were in lockdown and Smith was teaching and learning remotely. By summer solstice (June 20), we may finally have the American awakening needed for more than 400 years. As Gabi Starr, president of Pomona College (and Kahn 20th anniversary speaker in the presidential colloquium series last year) wrote recently: “A virus drove us indoors. A violent death drove many of us out into the streets.” If, at the beginning of the pandemic, we asked ourselves how Higher Ed would have to change because of Covid-19, now we may wonder what the real point of resolving the coronavirus pandemic would be without also curing the pandemic of global systemic injustice and inequity.

Where are Institutes like the Kahn in these conversations? Like classes at Smith, the Kahn’s yearlong projects went online, and they thrived there. They did so because, like all projects before them, they have produced a culture not only of curiosity, but of care. One of the most moving things that has happened in my experience at the Kahn took place on Friday, March 13 (which seems an eon ago), at the last in-person meeting of the Fear project. The faculty fellows cooked up a diversion that sent the student fellows out of the colloquium room. When they returned, the faculty were dressed in their regalia, and stood as the senior fellows walked and “graduated,” receiving a single flower in lieu of a diploma, as captured in the wonderful image at the top of this page. For a project named as it was, it seemed to manifest its opposites. For the final six weeks of the semester, both Fear and TranslationS continued to work, collaboratively and productively, as invited speakers continued to show up, even from abroad, albeit in the Zoomisphere.

After the work of the current projects concluded, the Kahn had intended to host a tenth reunion of the Telling Time project when its student fellows were back on campus for their own tenth reunion. The impetus for this was the loss of the time capsule the project had assembled and set into the walls of Neilson library when the demolition for the renovation was in progress. The capsule would have been opened at the student fellows’ fiftieth reunion. Because the capsule has been lost, co-organizers Bosiljka Glumac, Geosciences, and Richard Lim, History, instead invited not only the Telling Time fellows to a tenth reunion gathering, but also invited fellows from The Power of Disappearance (2014-15, as the capsule had been lost) and from Memory: Form, Function & Fallibility (2015-16, as we thought it might be useful to get insights about how to remember that which is lost). Absent an on-campus reunion, we forged ahead with yet one more Zoom meeting in order to touch base and catch up—and it was worth the Zoom fatigue! Just hearing from the student fellows about the lives they’ve been leading was a tonic in challenging times, and it reminded us all (as if we needed it), how transformational the Kahn can be. 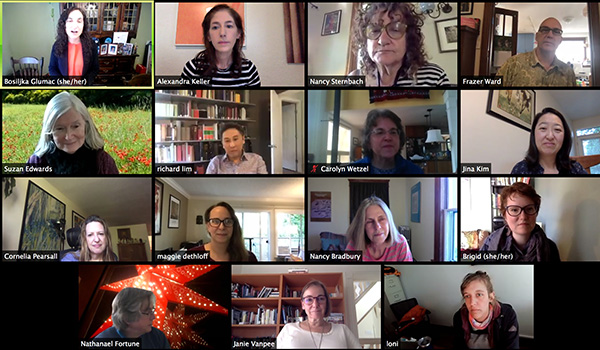 At the Kahn, we have worried no less than the rest of the college about the challenge of starting remotely from scratch. We will have a smaller store of previously shared ideas, values and history to call on. We have fewer of our annual rhythms to call on. Normally, the month of April sees the building abuzz with farewell meals for the outgoing projects and welcome dinners for the incoming ones. A baton is passed. A table full of people, many of whom were strangers in September, becomes a village by May, and a new table sits down looking at new faces, hoping to remember over the summer whose interesting project went with whose face. May brings the annual porch party to commemorate the end of another year, filling the porch with faculty and staff ready for a celebratory cocktail. Obviously, none of that happened this year.  And because we are not on campus, our summer programming is on hiatus. No writing groups filling every conference room, no Lyra Music Festival and Workshop, whose extraordinary young classical musicians are in residence at Smith, and entertain weekly on our porch at lunchtime concerts. Our wonderful and committed staff, without whom it would be impossible to do our work, are on furlough. Nevertheless, the multiple online planning meetings we have had for both Technophilia/Technoskepticism and Imagining Climate Change: From Slow Violence to Fast Hope should give all of Smith reason for that selfsame fast hope.

And the planning continues: The Kahn is the generator and hub of Smith’s next campus-wide annual theme, democracies, which will inspire many of the events on campus in 2021-22. For that same year, we are currently seeking nominations for the Neilson Professorship, always housed at the Kahn, and I hope you will consider nominating someone who dovetails with the democracies theme. All of the Kahn’s programming will, in one way or another, touch meaningfully on that idea, starting and ending with our two yearlong projects: Coping with Democratic Precarity and the Prospects for Democratic Renewal, and Democracies Redux: Resumptions, Resilience, Reconciliation, and Restoration. As always, projects are at their best and their strongest when they are populated by a diverse group of people manifesting a breadth of fields, methodologies, experiences, and viewpoints. (Faculty fellow proposals are due in October, but I and the four co-organizers are very happy to talk anyone about possible projects over the summer.) The Kahn seeks more than just diversity in its projects. It seeks fellows whose curiosity is matched by a willingness to be vulnerable and to take risks, and to support others as they do the same. It’s an ethics of working and being that we need more than ever right now. The Kahn fosters a freedom inside of any given project to decenter the seeming givens hard-earned through years of excelling in a chosen field, in order to let a new set of thoughts take root. There’s an enjoyable discomfort—not just because you can always pick up your chosen lens again anytime you want—but also because this freedom lets us rehearse other, bigger freedoms. As Nina Simone said, “I’ll tell you what freedom is to me: no fear. I mean, really, no fear.”

Running alongside all yearlong projects are the short-terms. The yearlong projects are two years in the planning, but the short-term ones are designed to accommodate epiphanies, sudden realizations, or test kitchen ideas, or respond to quickly-changing events, and are often produced (relatively) on the fly, running for a day, a weekend, or periodically through a semester, bringing together faculty from across the arts and humanities, social sciences and STEM to experiment with an idea and see where it takes them. The odds are that we will put these short-terms on hold for fall, but they will be back for spring. The one likely exception to this hiatus is a December panel we plan to run after the U.S. Presidential election, to process the outcome and expand necessary conversations about ways forward.

The Kahn’s central mission is to support faculty development, particularly as that narrative of development evolves at a liberal arts college that demands excellent teaching and significant research from across its ranks. In noting the yearlong projects and my request for short-term ideas for 2021-22, I also want to signal that the programming for 2022-23, and for some time after, might look very different from that of the Kahn’s first two decades. For most of us, research has been put on the back burner at best, and at worst, has been scuttled because an experiment has not been allowed to grow or be tended, or an area of the world where field work takes place is off limits, or the intense time and energy demands of small children now at home 24/7, and older family members in greater need than ever, has made work almost impossible. And there are other stories to be told here. So, one of my most important tasks as director from this point on is to listen to my colleagues and hear what you need in order to regain your footing and pick up the threads. The Kahn has worked beautifully in its usual way for a long time, but these times are unprecedented, and our support response must match it. We will almost all be working with constrained resources and conditions, but in the wake of the pandemic, the urgency of repairing and restoring our human networks is a high priority, and the Kahn is ready to reshape itself to meet the needs of the faculty however it can.

Telling Time indeed. Time is elastic these days. The pandemic has made every day seem like Wednesday and Sunday all at once, and it’s hard to remember whether that Zoom meeting we had was yesterday or last month. But other wheels are turning with urgency in one direction only. The inequities and injustices that the pandemic have put so plainly, incontrovertibly in relief, tell us that time is up. It will be some time before we can gather on the Kahn porch and raise a glass. But when we do, I hope we can toast to truly better times for all.

The Kahn Chronicle is a biannual newsletter to update the Smith community on projects, events and happenings of interest at the Kahn Institute.