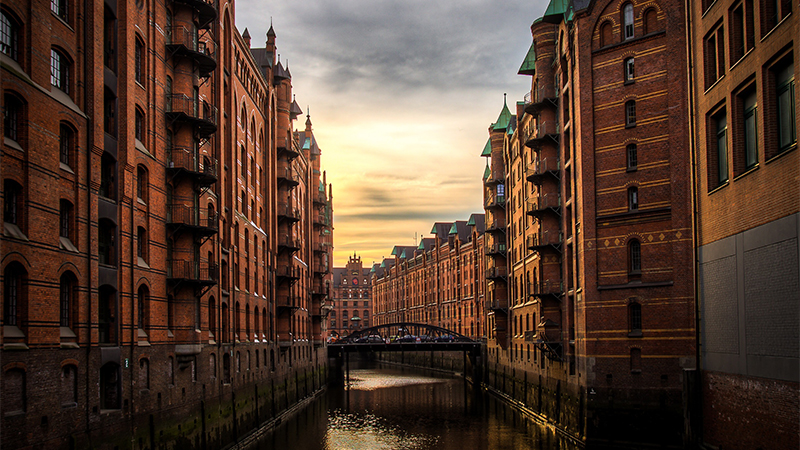 Located near the North Sea, Hamburg is known as both gateway to the world and one of Europe’s most sustainable cities. Study in German at the Universität Hamburg with options for either the full year or spring semester, or opt for the Practicum Program in the fall semester.

Applications for the Spring 2023 semester (Smith and guest students) are due by the first Monday in October (October 3, 2022). It is recommended that spring applicants apply early to guarantee admission.

The program begins with a cultural orientation, intensive language study and excursions. Students enroll in four 4-credit courses each semester based on their language ability, including a German language course, university courses taught in German or English, and optional program courses in German history and culture.

Note: If academic year students want to combine their academic work with practical experience, they can pursue a Practicum Project and join the Practicum Course in the fall (see below).

Students in this track pursue a practicum project (which may be either an internship, voluntary work, or a research project). Students earn credit through a practicum course, a German language course and two additional courses at the Smith Center.

Note: Track B students may decide to return to Hamburg in March and attend the Track A University Studies Program in the spring semester.

Both the year-long and spring programs begin with a four-week orientation session in Hamburg. The orientation program provides intensive language preparation, cultural courses and introductions to everyday and academic life in Hamburg. Topics covered in classes include the German university system, the press and politics. They are supplemented by daily instruction in the German language. The group takes several excursions to north German towns and typically spends  a four-day stay in Berlin. Scheduled events include tours of the city, visits to museums and monuments and several evenings at concerts, the opera or the theater.

The orientation (which is tied to the practicum project) will start online prior to students’ arrival in Germany. After students arrive in Hamburg, the orientation program will continue with a brief introduction to aspects of daily life in Germany, like public transportation, health care, etc.

Students enroll in four courses per semester, with the following requirements:

Students enroll in four courses, with the following requirements:

All Track B  students earn 16 credits per semester.

For students participating in Track A: University Studies Program, all university courses taken in a student's major may be supplemented by tutorials arranged especially for Smith and conducted by advanced graduate students. The tutorial sessions meet two hours each week to clarify and elaborate upon the lecture material, and give you the chance to explore topics in greater depth. Students also receive writing assistance when preparing semester papers in German for university courses.

About the Smith Center

The Smith Center houses the offices of the director and associate director, who provide academic advising and friendly guidance. The Smith Center is located one block from the university in the Gästehaus der Universität Hamburg and is equipped with internet and computing facilities, as well as a classroom and lounge area with a small library.

Building on work done in the orientation program, this course refines written and oral skills by examining everyday and academic challenges along with current topics in German media. Emphasis in class is on building practical vocabulary and mastering grammatical structures. Normally offered in the fall semester.

This course builds on the written and oral skills covered in Language and Location I or the spring orientation program by exploring current cultural and social issues in Germany, particularly contemporary approaches to environmental issues. Emphasis in class is on grammatical structures and expanding vocabulary, and includes a general introduction to German academic writing. Normally offered in the spring semester.

The Academy and the Environment

The objective of this course is to improve written and oral skills, building on work done during the orientation program or in the fall semester. Students learn to employ complex grammatical structures and expand their vocabulary while investigating current social and cultural issues. Emphasis is on academic challenges, such as composing a German term paper, and environmental challenges as discussed in German media. This is an advanced German language cousre normally offered in fall and spring semesters.

The course guides students through the different stages of their practicum project and helps them design their own project path. It provides methodological information as well as opportunities for reflection and discussion of individual projects and experiences. Focus will also be on aspects of interculturality (perception of cultural differences, aspects of intercultural communication, reflection on students' own role as agents and observers in an intercultural setting). Mandatory for Track B students only. Taught in English.

The course looks at Alexander von Humboldt from different perspectives and discusses his contributions to various fields of science as well as his role as a politician and global citizen. Focus will also be on how his life and works have been perceived in later centuries and until the present. Includes a day trip to the Humboldt Forum in Berlin. Normally offered in the fall semester. Taught in English.

Culture in Hamburg: Topics and Trends

The course examines the role of culture and cultural policy within a community. Using the city of Hamburg as a classroom, students will explore and discuss different cultural sites which may include museums and concert halls as well as sites which are relevant for history, history of technology or sports culture. Attendance of performances and site visits is required. Normally offered in the fall semester.

This course, which provides a continuation of German History and Culture from 1871 to 1945, covers the post-war period of occupation; the founding of two German states; German-German relations during the Cold War; and the re-unification of Germany. Historical analysis; screening of films. Normally offered in the spring semester.

University Courses (Track A only)

Please note: The courses listed here are examples of courses that have been offered in previous years, and may not necessarily be offered at the time of registration. Please check your specific college program for current course offerings.

Selected courses are taught in English each semester in the humanities and in the departments of Economics, Political Science, Sociology, and Education at the University of Hamburg. Typical courses include:

Arrival in Hamburg (semester students only) 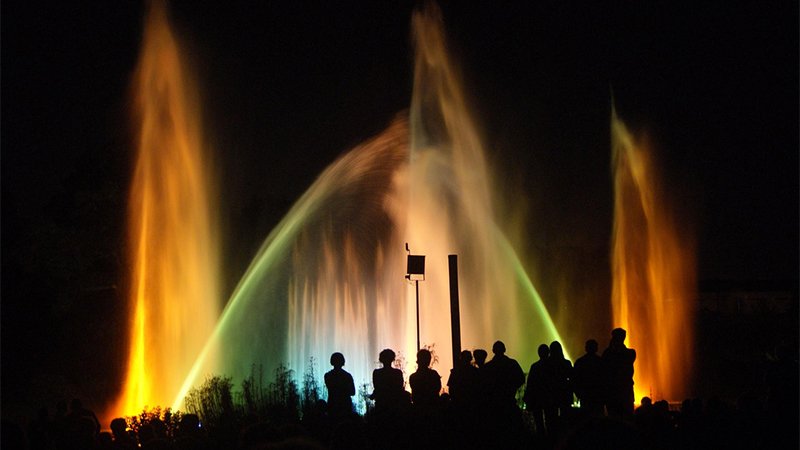 The German Academic Exchange Service (DAAD) together with the University of Hamburg are collaborating to offer scholarships to students who are studying abroad in Hamburg during the academic year. All year-long students (including guest students) are encouraged to apply to this merit-based scholarship. Two scholarships for €4,250 each will be awarded each year. Information on how to apply is included in the Smith in Hamburg program application. Note: This scholarship is for year-long Track A students only.

Program participants live with German and international students in coeducational university residence halls. Located throughout the city, the halls provide students with single rooms that remain available to them during vacation periods and until the end of the academic year. The rooms are modern and the common kitchens are well equipped. Students must live in university housing; independently arranged housing is not permitted.

Program participants live in single rooms in coeducational hostels located throughout the city and share common kitchens. Students must live in program housing; independently arranged housing is not permitted.

Students receive a board stipend each month to cover their meal costs. Though students cite the numerous restaurants in Hamburg as an inexpensive alternative to cooking, many students enjoy preparing their meals in shared kitchen facilities in their residence halls. Centrally located student cafeterias also provide reasonably priced meal options.

Upon arrival to the program students will receive approximately 50 Euros to use to purchase a German SIM card. Students are responsible for all associated charges.

The Hamburg program incorporates a wide range of activities, from guided trips to historic and cultural locations, to group events like Tea Hours and the annual Thanksgiving Dinner with program staff and faculty. Track A students also join activities at the University, including music, theater and sports. Additionally, all students are encouraged to explore the restaurants, clubs and cafés in Hamburg, a modern European city.

Boat tour of the harbor; day trips to medieval Lübeck or Lüneburg; several nights in Berlin during Orientation, and several nights on the coast of the Baltic Sea.

Architectural tour of the city, concerts in the Laeiszhalle or in the Elbphilharmonie, theater and opera performances, and visits to museums.

Please be sure you meet Smith College's eligibility requirements for approval to study abroad. In addition, Smith in Hamburg has its own program-specific requirements.

Academic Year: Two years or the equivalent of college-level German, normally four 4-credit courses, of which one should be taken in the spring semester preceding study abroad.

Two semesters or the equivalent of college-level German, normally two 4-credit courses, which should be taken the year preceding study abroad

Smith Program Abroad fees do not include international travel, passport and visa fees, books and art supplies, and personal expenses including phone calls.

Smith College students are eligible for financial aid on the same basis as when they are studying in Northampton (with a few exceptions). For questions about Smith financial aid related to study abroad on a Smith program, please visit Student Financial Services.

Smith College does not provide financial aid to students from other institutions; those students should contact their own college for financial aid assistance.

All students enrolled in one of the four Smith Programs Abroad are automatically covered by a supplemental study abroad insurance policy through GeoBlue.

Please note that this is a supplemental plan only. All students participating in these programs are also required to be covered by a U.S.-based primary health insurance and will be automatically enrolled in and billed for the Smith College student health insurance plan through Gallagher Student Health & Special Risk at the beginning of the term abroad.

More information about insurance is available on our Health & Safety section.

Applicants from other colleges must also submit:

Students can find the application materials and apply to a Smith Program Abroad online using the new Smith International Travel Experiences System (SITES) by clicking on the appropriate log in option below.

Before applying to a Smith Program Abroad be sure to:

The German government requires students to obtain a Residence Permit (Aufenthaltsgenehmigung) after arrival in Hamburg. During the first meeting of the orientation program, the director and associate director will help students complete the necessary paperwork. A student who enters Germany prior to the official start date of the program may be responsible for obtaining a residence permit herself. Permits normally include permission to work part-time during the semester and full-time during semester vacation.

Citizens of Other Nations

Citizens of other nations are required to apply for and receive a residence permit (Aufenthaltsgenehmigung) through the German Consulate in Boston prior to arrival in Germany. Students should research visa application requirements online and contact the Office for International Study for supporting documentation.

Citizens from the United States, Canada and the European Union are permitted to study in Germany for up to 90 days without having to obtain a Schengen visa.

Citizens of Other Nations

Citizens of other nations may be required to apply for and receive a Schengen visa through the German Consulate in Boston prior to arrival in Germany. Students should research visa application requirements online and contact the Office for International Study for supporting documentation.