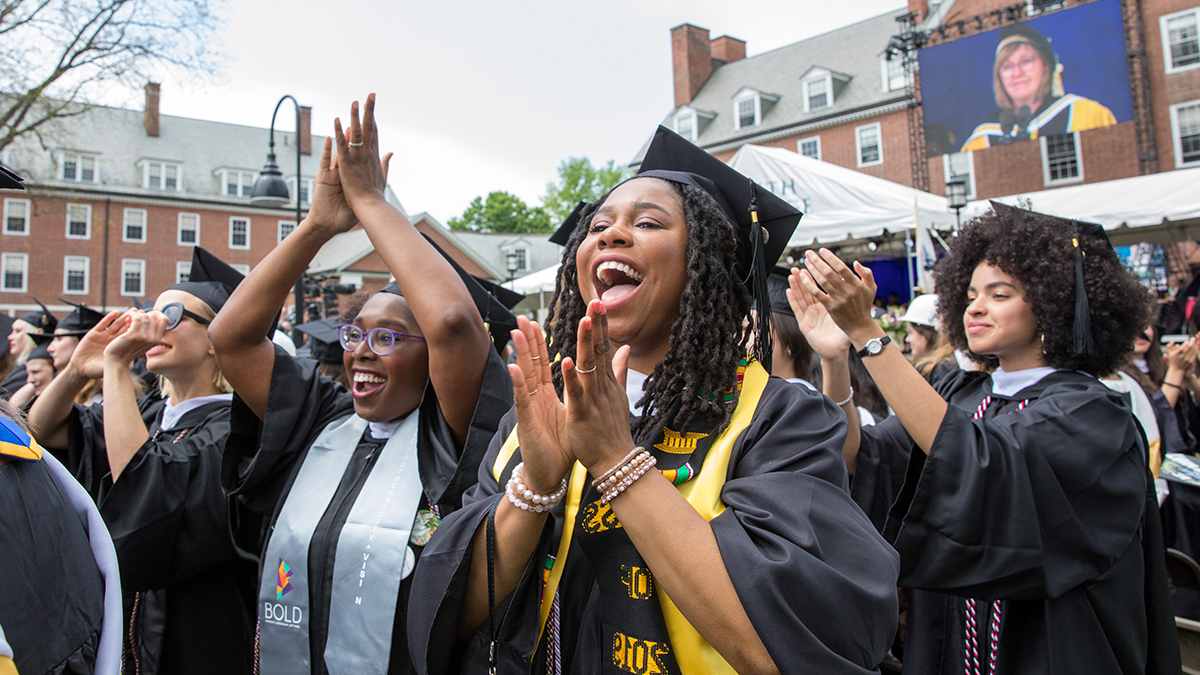 Commencement Weekend is Smith’s chance to honor its graduating seniors and to observe such traditions as Ivy Day and Illumination Night. The weekend culminates on Sunday when parents, friends and seniors gather to hear a distinguished speaker and observe the awarding of diplomas.

Academic dress is believed to have originated at medieval British universities when those institutions were associated with the church. The hoods are a carryover from the times when monks wore them either as a head cover or as a shoulder cape sometimes used to collect alms.

Gowns are usually designed according to the degree held by the wearer. Bachelor's gowns have long, pointed sleeves; master's gowns have fuller, closed sleeves with a slit at the arm or wrist. Doctor's robes are often worn open and have velvet edging down the front and three velvet bars across each sleeve. The length of the hood and the width of its velvet border indicate the wearer's highest academic degree.

Colors designate the wearer's college or university and field of study. The color of the sleeve bars and of the velvet on the hood indicates the academic field, distinguished as follows: white for arts and letters, light blue for education, brown for fine arts, pink for music, dark blue for philosophy and yellow for science. The degree-granting institution is traditionally represented by the color of the hood's satin lining. Robe color and cap shape may also designate the college or university.

At Smith's first commencement in 1879, caps and gowns were considered ill-suited to the pioneer spirit of the college. Over time, however, traditional academic regalia came into favor. By 1910, at President Burton's inauguration, the standard for faculty dress was black academic gowns. That tradition continues today at official college functions: Opening Convocation, Rally Day, Ivy Day Awards Convocation and Commencement. Some Smith faculty members wear around their necks the Charis medal, which is awarded to those who have served on the faculty for 25 years or more.

In the late Middle Ages the academic mace became part of the ceremonial insignia of the universities of Western Europe. A direct descendant of the battle mace and the regal scepter, the academic mace has become a symbol of the corporate authority of the institution and is always carried to open formal ceremonies.

The Smith College mace, carried at the head of the academic procession, was given to the college in honor of Florence Macdonald ’32 by the three presidents of the college and the six women who chaired the board of trustees during her years of service as secretary to the president at Smith.

The mace, fashioned chiefly from cherry and maple woods, has Celtic-inspired decoration. Carved on one side of the caput, or head, is the Macdonald crest and on the other side the Grécourt Gates. The crowning ornament of the caput is inlaid with end-grain boxwood and bears the dedication to Florence Macdonald as well as the college motto—“to virtue, knowledge” (2 Peter 1:5, King James version)—inscribed in classical Greek. The names of all the presidents of Smith College have been cut into the shaft.

The mace was designed and fashioned by noted sculptor and printmaker Elliot M. Offner, who taught at Smith from 1960 until his retirement in 2004.

The tradition of the Diploma Circle at Commencement can be traced back to 1911. Originally called the "Great Ring" and then the "Magic Circle," it finally became known as the "Diploma Circle." As graduating seniors at Smith traditionally march in the academic procession by house, they do not receive their own diploma when they walk across the platform. Following the Commencement ceremony, seniors march out of the Quadrangle onto the Laura Scales/Franklin King terrace and form a large ring, several circles deep. Diplomas are passed around each circle, with graduates leaving the circle as soon as they receive their own diplomas. Gradually, only one circle remains. Assisted by members of Sophomore Push, the Diploma Circle takes several minutes before each new alumna has her diploma and joins her family to celebrate her graduation from Smith.

The college Baccalaureate harkens to the medieval British tradition of awarding each degree recipient (bacca) with laurels (lauri). One of the college's oldest traditions, the Smith Baccalaureate is a celebration of thanksgiving led by seniors and the dean of religious life with a final address given by the college president. Seniors find the Baccalaureate to be a particularly meaningful way to begin Commencement Weekend with their classmates.

The Alumnae Parade "evolved gradually from the custom of alumnae classes to sally forth upon the campus while the ivy procession was being made up, and extend greetings to the senior class and to each other, and to do honor to the college, its president, members of the faculty and members of the various classes." The first official parade was held in 1909. Although alumnae now dress uniformly in white, earlier classes had varied, colorful and sometimes quite elaborate costumes. Colored ribbons now differentiate the reunion classes. The class of 1905 was the first to carry "placards," and by 1915 these signs were a regular feature, "hailed with appreciative applause and laughter all along the march."

Ivy Day and Illumination Night are traditional parts of Commencement Weekend. On the day before commencement, alumnae escort the seniors in a parade around campus. Then the seniors plant ivy to symbolize the connection between the college and its graduates. On Illumination Night, the campus is lit only by colored paper lanterns. The college basks in a soft glow, perfect for reminiscing on four years of Smith education and escapades. 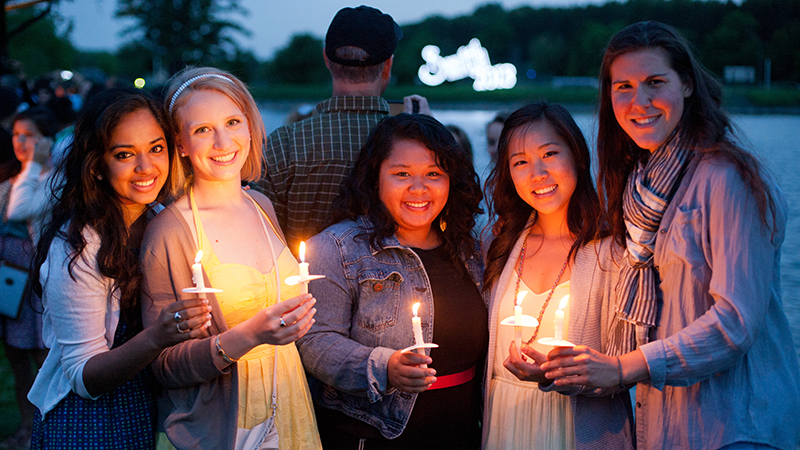 Ivy Day Awards Convocation and the Planting of the Ivy

A convocation has been part of Commencement since 1879. Its original format included the daily chapel followed by a special address by the president to conclude the academic year. Over the years, this event has at different times included recognition of retiring faculty members, announcements of student prizes, gifts to the college made by reunion classes and descriptions of the goals of the college. It eventually became the "Ivy Day Awards Convocation," devoted to recognizing those receiving academic awards, honors and prizes from the college, the Alumnae Association and The Smith Fund.

Ivy Day has been a Smith tradition for more than a century. The class of 1884 was the first to plant ivy as part of the ceremonies leading to its graduation, thus providing the day with its name.

The spot was traditionally marked by carving the class year into the stone foundation of the nearest building, as can be seen on Seelye Hall. In recent years, a ceremonial ivy has been planted in honor of the graduating class.

Another tradition is that of the ivy chain, carried by the Junior Ushers. The chain, which is actually made of laurel leaves, is placed on their shoulders. The ushers precede the seniors in the ivy procession.