BY Cheryl Dellecese
Sibyl Brown ’14, community engagement coordinator for Feeding South Florida, became an advocate for food justice at Smith, where she founded the Smith chapter of the Food Recovery Network.

Sibyl Brown ’14 remembers her outrage the first time she began educating herself about the amount of food Americans waste and the number of people who go hungry everyday.

In 2013, Brown founded the Smith chapter of the Food Recovery Network, a national nonprofit that guides college students in how to recover leftovers in dining halls, pack them up and donate them to local shelters and soup kitchens.

Several times a week, Brown and other student volunteers went to Smith dining rooms with their aluminum trays and foil and packed up the remaining food—with help from Smith dining staff—and then delivered the food to a shelter in nearby Holyoke.

“I think that hunger could be solved in my lifetime,” Brown says. “We make enough food to feed every person and then some, but we’re so wasteful, inconsiderate and thoughtless about food production in this country.”

Today, Brown continues her work in food justice as the community engagement coordinator for Feeding South Florida, a massive food bank and hunger-relief organization that serves over 700,000 individuals annually. Through that lens, she talks about what inspired her to take action, the misconceptions about food insecurity and the need for better policies to combat hunger.

After Smith
My first job after graduating in 2014 was at Feeding South Florida. I had never been to Florida before, but I had one Smith friend here. I knew I wanted to do food justice stuff. I worked as a volunteer coordinator there for two years and left to pursue my master's in nonprofit management at Florida Atlantic University. I returned to Feeding South Florida as the community engagement coordinator.

Getting the Word Out
I get to oversee and be a part of a lot of things, but my main job is to let the community know that we're here, what we do, and how they can get involved. I go to events at schools and businesses and speak on the issue of food insecurity and what Feeding America food banks are doing. I talk about solutions to hunger and what people can do to help.

Dispelling Hunger Myths
Food insecurity can and does happen to anybody. People often equate hungry with homeless, which is incorrect. Less than 10% of the people that we serve are homeless. Ninety percent of our families have a roof over their head. They have cell phones. They're your neighbors, but after they pay rent, medical and other bills they just don't have enough money to buy healthy food to sustain their family. Yes, the homeless are struggling and they're hungry, but most of our food insecure people in this country not only have a house, but they're working jobs, sometimes multiple jobs.

Growing Awareness
I grew up right outside of Washington, DC in a politically, civically engaged family. We were always volunteering and giving back and participating in community events. So, I was aware of hunger, but from a very privileged standpoint. When I came to Smith I volunteered at a soup kitchen and I started talking with the clients and I guess putting a face to hunger.

The Revelation
I volunteered, learned about The Food Recovery Network and really began noticing the amount of food being wasted at Smith every day. When I realized the connection of the amount of food that we were wasting versus how many people were going hungry, it hit me to my core. It was like, "Wait, so you're telling me that we make enough food to happily, healthily feed every single seven-plus billion people on this planet, and we don't because we're just wasting so much of it?"

Starting Food Recovery at Smith
I tried to bring food recovery officially to Smith in my junior year. I had to go through multiple hoops and meet with different people and eventually spoke with then director of dining services Kathy Zieja. She was weary at first but once I talked with her, she was all for it. By spring 2013 we became a club and started to recruit people. In the fall of my senior year we finally started successfully recovering food.

A Lasting Legacy
I follow Smith Food Recovery on Facebook. It makes me so happy, especially every time I see them posting pictures. It feels like a little piece of me is still at Smith. Just knowing that something I put a year or two of work into, something that really mattered to me, to see that there are students who agreed with the mission and see the vision and are continuing to carry it out, it brings me to tears.

The Future
I want to learn as much as I can about food banking and the food production system. Ultimately, I believe that if we want to bring about change, we have to do it systematically through policy. So, at some point, I would love to go into lobbying and advocacy to influence policy.

Parting Words
First, hunger can happen to any person regardless of race, religion and class status—and it's not their fault. Second, there is a clear solution to hunger. We just need to work on getting the food that we're wasting into the hands of those that need it. 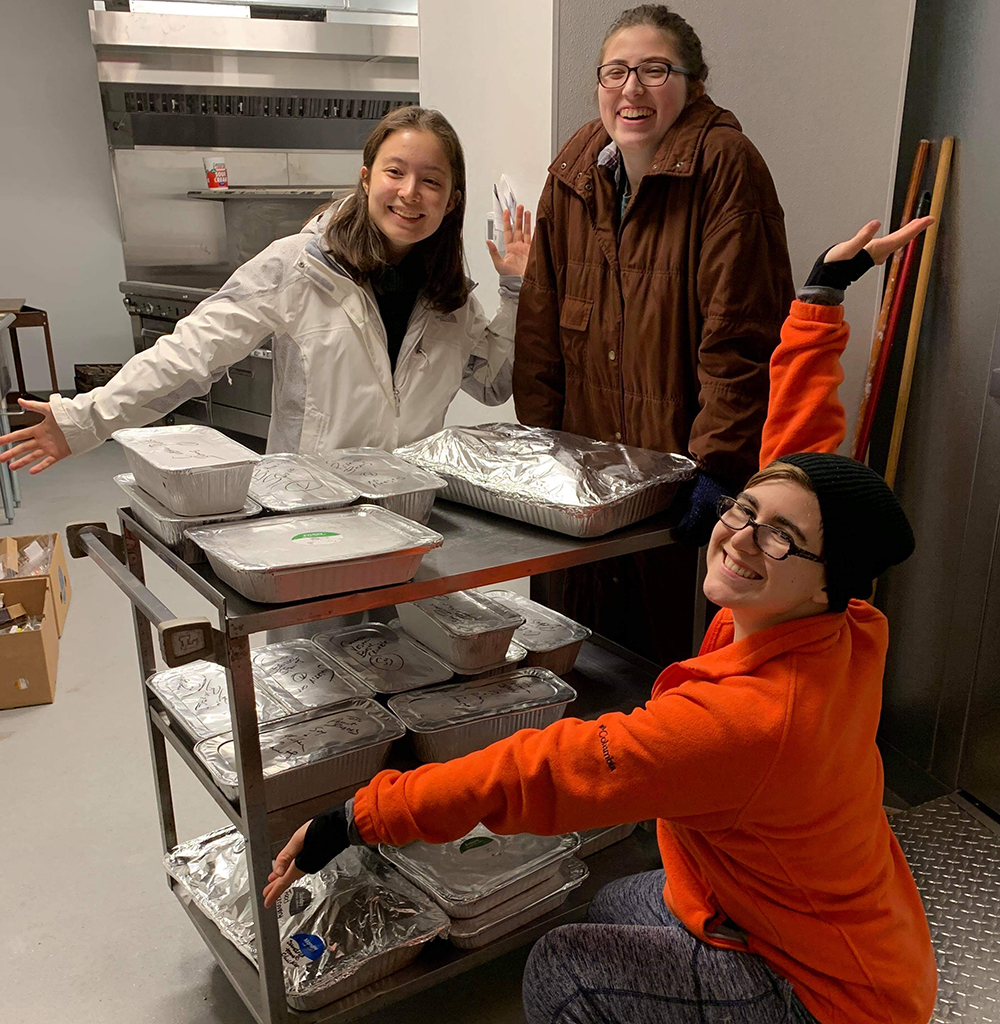 Since February 2014, when Sibyl Brown ’14 created the Smith chapter of the Food Recovery Network, student volunteers have recovered and donated more than 15,000 pounds of food.

The current head of the chapter, Kelsey Towne ’20, is an environmental science and policy major who is passionate about minimizing food waste. She is part of a core team of three students (pictured above) that includes Mizuki Stone ’20 and Jessica Brown ’22. They work with volunteers from student organizations to recover food once a week from multiple Smith dining rooms. Deliveries are made to MANNA Soup Kitchen in Northampton.

Towne says the Smith Food Recovery Network is the only organization she’s been involved with for all of her four years at Smith. “I believe that we do high-impact work,” says Towne. “The Smith dining staff and the staff at MANNA Soup Kitchen are so enthusiastic and grateful for what we're doing. I'm so glad that the Food Recovery Network exists at Smith and gives back to the Northampton community.”

Shazia Khan ’98 is ensuring that off-the-grid communities in Pakistan have access to clean energy. Her next move: the world.

Nicole Bearden AC ’19 launched the pilot segment of her podcast about contemporary art nine months ago as a final project for a Smith class. A recent Helen Gurley Brown Magic Grant from the college is helping Bearden expand her work on “Critical Bounds.”

Did you spot Smith's "Meridians" on the new "Care in Uncertain Times" syllabus? @DukePress is making all the texts free to read online through June 30. https://t.co/VPRA2hC0R1 https://t.co/kq9YcLSbbu

RT @cooleydickinson: We are so grateful to community partners like @smithcollege ... thank you for helping our workforce during this public…