Naming Rites: To Change or Not to Change

Three weeks after arriving at Smith, Sandra Pierce ’73 was at a mixer when she met the man who would become her husband.

When they married four years later, she took his last name, Strathmeyer. She had a few early misgivings about giving up her name entirely—she went on to informally hyphenate her name to Pierce-Strathmeyer and typically signed her name as Sandra P. Strathmeyer.

After the pair divorced 27 years later, she was able to articulate that dissatisfaction more clearly. “I realized that I had been Sandra Strathmeyer longer than I had been Sandra Pierce,” she recalls. “And in some ways, parts of me had gotten lost.” 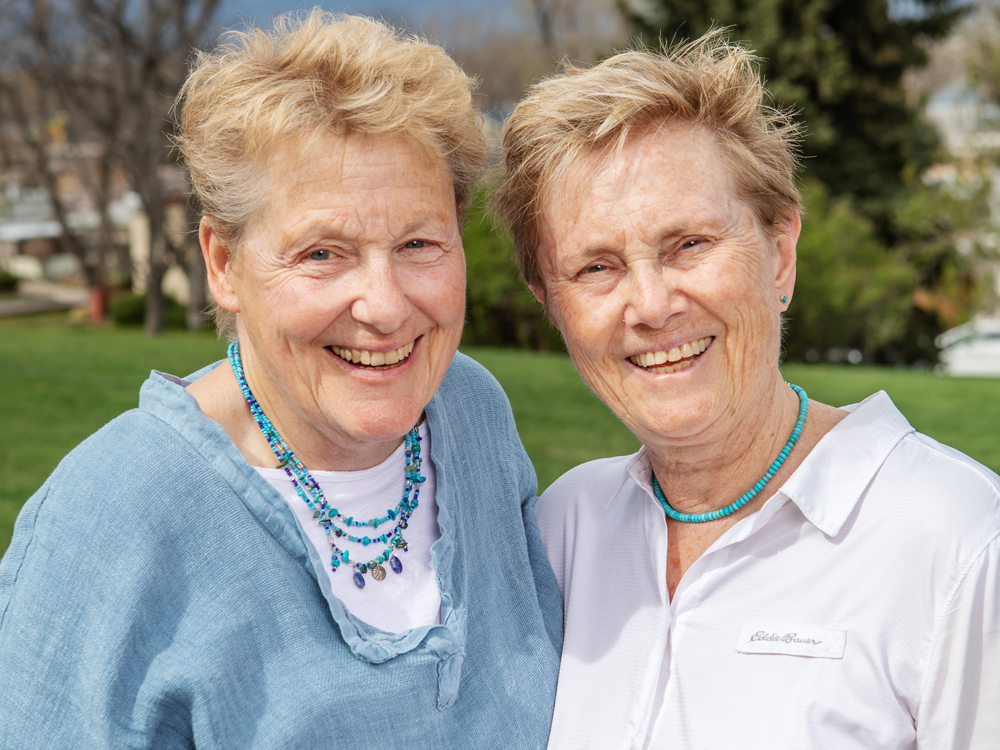 After her divorce, Sandra Pierce ’73, right, returned to her family name and retained it after marrying Carolyn Bell. Photo by Julia Vandenoever ’96.

Pierce’s internal conflict mirrored much of what was happening in the wider culture in the 1960s and 1970s, says Nancy Whittier, Sophia Smith Professor of Sociology. “The rise of the feminist movement called attention to sexism in taken-for-granted practices in daily life,” she says. “Feminists challenged the idea that women’s identity should be defined through their husband. That included going by ‘Mrs. George Smith,’ using honorifics like ‘Mrs.’ and ‘Miss’ that signified marital status and taking husbands’ last names.”

As the dust from Pierce’s divorce settled, she began digging into her family’s history and scouring photos from her past to rediscover who she was. After her divorce was finalized, and with the blessing of her three sons, she changed her last name back to Pierce. “I wanted to be Sandra Pierce,” she says. “That’s who I am.”

If American culture has become more open to women choosing from a wider range of surname choices at marriage, it hasn’t necessarily made anyone’s individual decision easier. From keeping a birth name to changing it to a partner’s, from hyphenation to brand-new names, women (and men) face a dizzying array of options. Our names are just a few words, but they represent who we are to the world—and to ourselves.

While statistics are scarce and not entirely reliable, the numbers that do exist suggest that women now are more likely to keep their own names at marriage than they had been in the past. A Google Consumer survey indicates that 17 percent of women marrying in the 1970s kept their surnames while 20 percent did in 2015. A study of New York Times wedding announcements—a select group, to be sure—noted a jump from 16 percent in 1990 to 30 percent in 2014. About 10 percent of women chose a third option, such as hyphenation.

Smithies have some creative solutions for settling the name game. Read more at "What’s in a Name? It’s Complicated"

As she readied her work, she discovered several other Sarah Millers were publishing in related fields. “I needed to figure out how to differentiate myself and create a consistent publication record,” she recalls.

She and her husband, Spenser Fellows, eager to start their new lives on equal footing, decided they would both hyphenate to Miller-Fellows. The name flowed seamlessly, and it was easily distinguishable in Sarah’s academic field.

Overall, she couldn’t be happier with the decision: She was thrilled to find she could get the exact URL of her name to build a website for her fledgling consulting business, an option that wouldn’t have been possible if she had remained Sarah Miller.

Miller-Fellows feels her choice was a relatively easy one—but she is hesitant to apply a larger guiding principle. “What if I’d been Ophelia Miller? Maybe I would have been happy to leave Miller alone,” she muses. “Every individual has a set of life experiences that will shape how you think about your name and how you think about that in relation to your identity.” 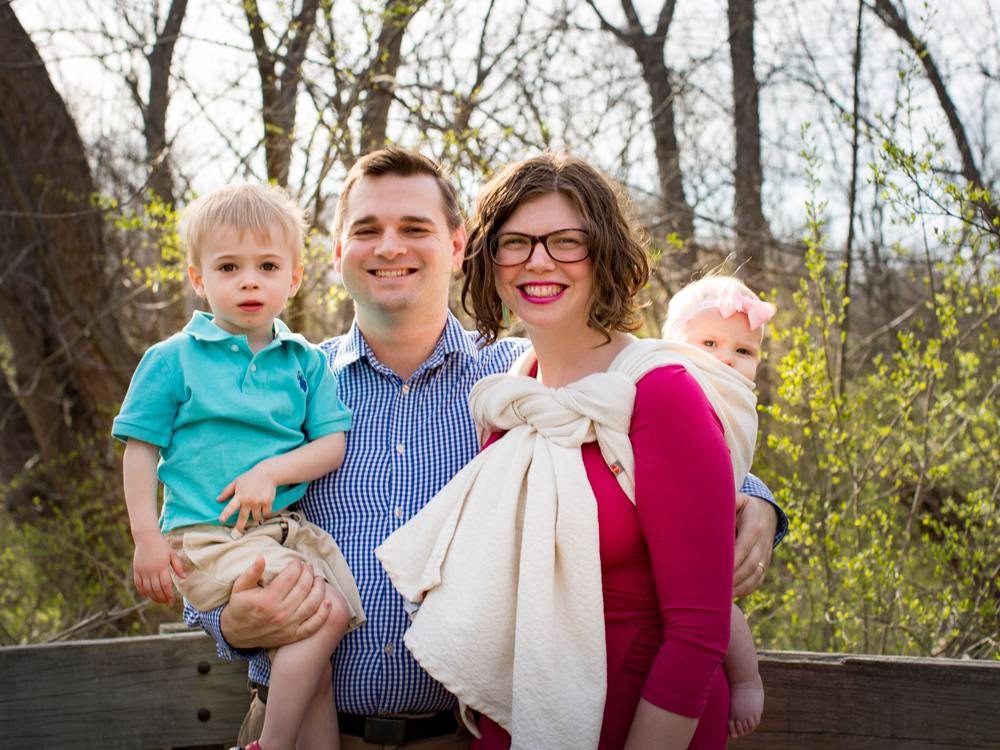 Sarah Miller-Fellows ’10 and her husband, Spenser, decided the entire family would hyphenate, including Oliver and Charlotte, now 5 and 2. Hyphenating let Sarah set herself apart from other Sarah Millers. Photo: Amber Meek Malek

Such was the case for Gina DelCorazon ’04 and her wife, Ana, who received her M.S.W. from Smith in 2011. Complicated family relationships led them both to jettison their birth surnames—Russell and Echevarria, respectively—in favor of DelCorazon, a name they created together.

The name, which means “from the heart” in Spanish, is a nod to Ana’s Puerto Rican heritage. They also gave the surname to their young son, Toño “[DelCorazon] is kind of cheesy, but we’re cheesy people! That’s real,” Gina says. “We’re creating our own traditions, and it represents who we are.”

Plenty of women choose to keep their birth surnames—though the reasons behind those decisions are as varied as the names themselves. Allison King ’02 could see the Shakespeare jokes coming from a mile away when she and her husband, Jonathan Leary, a 2002 graduate of the University of Massachusetts, decided to get married. Hyphenation was out of the question: She wasn’t interested in saddling herself—or any future kids—with a lifetime burden of fielding half-baked “King Leary” quips. As their wedding day approached, they knew they had to make a decision about their last names. “I was minutes away from taking his last name,” King says. “But then [Jonathan] said, ‘I’ll take yours. Who wouldn’t want to be a King?’”

It turned out to be a hard pill to swallow for some. At the wedding, Allison’s father-in-law groused that if he’d known his son had planned to take King’s last name, he wouldn’t have paid for the rehearsal dinner. The pushback her husband gets, though relatively rare these days, shares more than a few similarities to the skepticism many women faced in the ’60s and ’70s when they made the then-unconventional decision to keep their birth names.

If many women have at least had to entertain the question of if or how they would change their names after marriage, Ayesha Siddiqui ’08 is an exception. Siddiqui, who is part of a fairly conservative religion, says that in her Pakistani Muslim culture it is generally assumed that both men and women will keep their surnames. She did not buck tradition when she married her husband, Ameen Ali Mohiyuddin. (Children often—though hardly inevitably—take on the husband’s last name.)

Even if she hadn’t had the weight of religious tradition behind her, she can’t imagine changing a name that she shares with the youngest wife of the Prophet Mohammad. “She was a pioneer,” says Siddiqui. “A lot of traditions come from her, so the idea of changing my name was just, ‘No, never.’”

She’s a little surprised that the surname question still carries so much weight. “We’re in [2019] now,” she says. “We’re still thinking about this? Change if you want. If you don’t want to, don’t.” 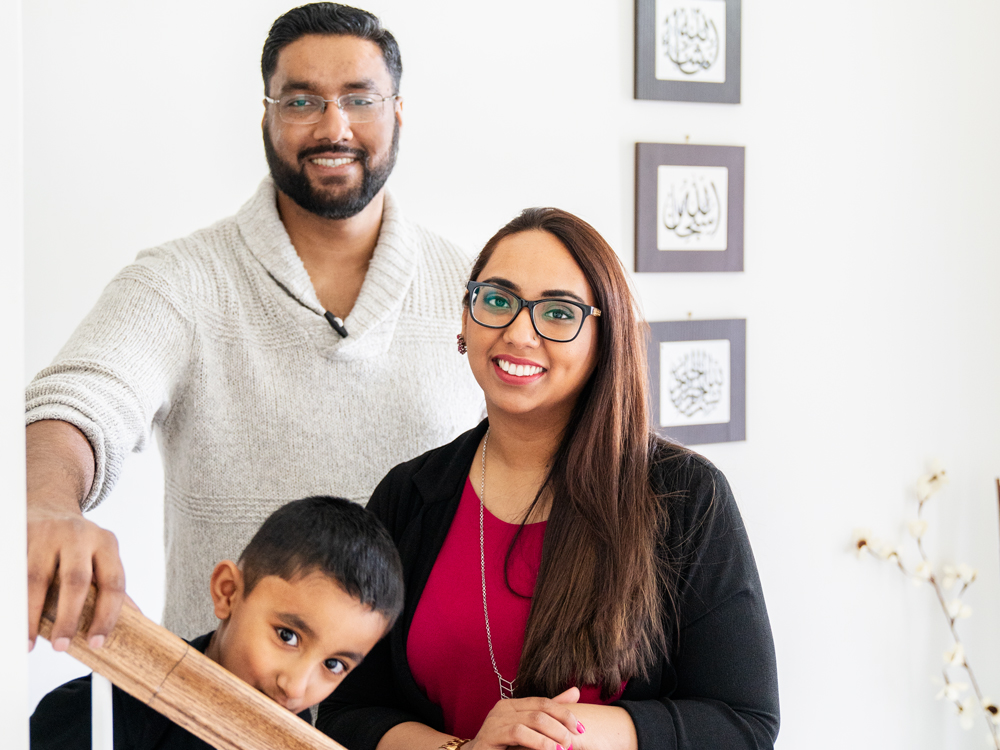 Ayesha Siddiqui ’08, at home with her husband, Ameen Ali Mohiyuddin, and their son, Mohammad Ali Mohiyuddin, 4, says her cultural tradition is for both spouses to retain their surnames after marriage. Photo by Ryan Donnell

Lex Beach ’02 embraces the messiness of names and identity. She and her wife head up a blended family of seven kids; among the nine of them, they have a total of five last names. Over the years, Beach herself has had three surnames. While the myriad names have led to a few minor headaches—mostly linked to the family directory at her kids’ schools— she’s often surprised by how rarely it’s an issue. “The world still spins,” she jokes. “Names don’t make a family, love makes a family. Corny but true.”

Ten years after divorcing her husband, Sandra Pierce met Carolyn Bell, who is now her wife. When they married, neither considered changing her name.

From her perch today—45 years removed from her decision to change her name when she married the first time—Pierce is convinced there’s no one right answer.

But she does encourage anyone wrestling with the choice to truly engage with what that decision means. “Changing your name allows you to reinvent yourself, but it also means losing your history and heritage,” she says. “Understand what your name means to you. Know who you are and who you want to be before you make that decision.”