News & Events for the Smith College Community
Research & Inquiry May 3, 2022

BY Barbara Solow
Professor of geosciences Sara Pruss was reminded recently that scientific discoveries result from looking in the right places for answers to big questions.

That’s what happened with a research project by Pruss and Lexie Leeser ’21 that could change prevailing wisdom about early animal life on Earth.

Their discovery, from rock samples collected in 2019 in Nevada, “felt like a happy accident,” Pruss says. “But then a friend reminded me that when you are consistently looking in the right places and during the right time intervals, that’s how you uncover such things.”

Leeser, who is now working at a native wetlands plant nursery on the Maryland shore, says her experience on the project shaped her Smith experience. 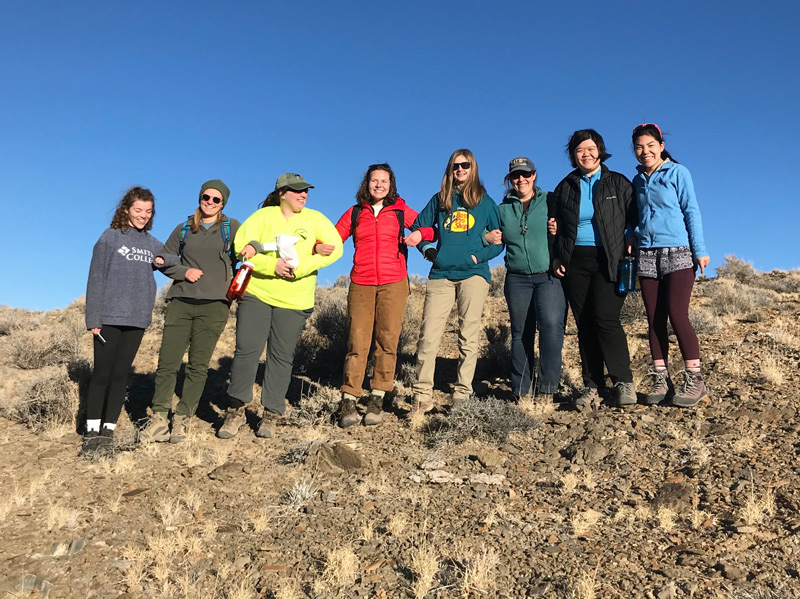 “Working with Sara taught me so much about the process of getting a scientific paper published, which helped me figure out how I might want to integrate my degree into my future career,” she says. “It was a super exciting project to be part of.”

Their research could help extend scientific knowledge about early reef ecosystems and the evolution of organisms that lived there. If their evidence is confirmed, Pruss and Leeser say, it will push back the appearance of bryozoans on Earth by some 30 million years.

Here’s what else Pruss had to say about the discovery.

What questions were you looking to answer in your research?

“Bryozoans are organisms that are still around today and are reasonably common. There’s been a longstanding question about when they first appeared in the fossil record. As of last year, everyone thought they appeared about 480 million years ago, in the Early Ordovician Period. Yet, with all other marine skeletal fossils showing up in the early Cambrian Period, there was a sense that bryozoans should also appear in that earlier time. But nobody had found the evidence.”

How did you uncover that evidence?

“We had an idea from field research we did in 2017 and 2018. We were looking at fossils in a very well known ancient reef in an area called Esmeralda County in Nevada, and we started seeing fossils in the rocks that didn’t look like anything we’d ever seen before. When more examples turned up, we decided we needed to go back and sample those areas just outside of the reef. In 2019, while leading our Field Studies of the Desert Southwest class with [associate professor] Jack Loveless, we drove in ahead of a snowstorm and worked as quickly as we could to get the samples. Students cut up every single rock we brought back, and then Lexie worked over that summer and for an entire remote fall with the images and the data we’d collected.”

What was it like to collaborate with a student on such a discovery?

“I met Lexie in her second semester at Smith when she took an oceanography class with me. Our project on bryozoans was disrupted right in the middle of it, when things shut down due to the pandemic—and that was challenging. But we didn’t want to give up. We stayed connected over the remote year because we had built a great relationship, and Lexie was excited about the work. I want to emphasize that this project emerged from the type of course-based research we do at Smith. We provide research opportunities to our students where we enable them to get into the field and make their own discoveries. And that leads to transformative science.”

Other researchers have said that bryozoans are often overlooked by scientists, compared to the coral reefs those organisms are associated with.

“Yes, bryozoans are one of our most important fossil groups, but they are less gregarious and exciting organisms—to some—than corals. Bryozoans wash up on the beaches of Cape Cod today, and they have really deep roots in earth history. It’s very telling that people had not found evidence of them in the Cambrian until this last year.”

What might be the ripple effects of your findings?

I think this discovery will have a real impact on how paleontologists think about early skeletal groups and reefs. We’re going to be able to understand a lot more about early reef ecosystems. When you examine the evolutionary history of a group, you’re documenting how they first appeared in the fossil record and changed over time. And to alter that—to basically rewrite the paleontology books with support for the early occurrence of bryozoans—is a really big deal.”

What do you hope will happen next with this work?

“I really hope that people start looking for these organisms, and we build the record of their early evolutionary history. We need to better understand their ecology and their environment. And we need to look around the world at that same time interval to see how diverse they were. We now have beautiful search images, so that people can go out and keep looking. There’s more to do!”

What are your favorite signs of fall on campus? Photos by Jeff Baker https://t.co/P09KLEtqTN

RT @SabadosaMA: Join us tonight at @smithcollege, Seelye Hall, 7 pm. We will livestream the event as well so come in person or watch on our FB page. https://t.co/xaZ1TEIbdQ