News & Events for the Smith College Community
Events May 15, 2022

BY Barbara Solow
Photographs by Sam Masinter
Author and education leader Beverly Daniel Tatum told graduates at Smith’s 144th Commencement Sunday that despite challenging times, “change is possible”—and “it won’t happen without you.”

“It’s not the result of ‘one-and-done’ action, but requires persistent, continuous effort, especially to sustain it,” she said.

Smith graduates are uniquely prepared for leadership on urgent issues such as climate change and racial justice, noted Tatum, a scholar and clinical psychologist who will serve as interim president of Mount Holyoke College beginning in July.

She urged graduates to “develop and maintain a discipline of hope” over fear, adding, “You don’t have to be the CEO or the president of the organization to influence others . … Identify your sphere of influence and use it unceasingly to advocate for the change you want to see.”

At Smith’s first fully in-person graduation ceremony since the start of the pandemic, the college awarded degrees Sunday to 598 undergraduates and 51 graduate students. Members of the class of 2022 came to Smith from 42 states and 22 countries.

The college awarded honorary degrees to Tatum and four other outstanding women:

Commencement weekend marked the return of cherished traditions including parades, the planting of ivy garlands and lighting the campus walkways with colored paper lanterns.

On Sunday, the Quadrangle was filled with graduates, family and alums, many holding cell phone cameras aloft. Hugs, high fives and cheers came in waves during the ceremony. Hundreds more watched the proceedings from afar via livestream. 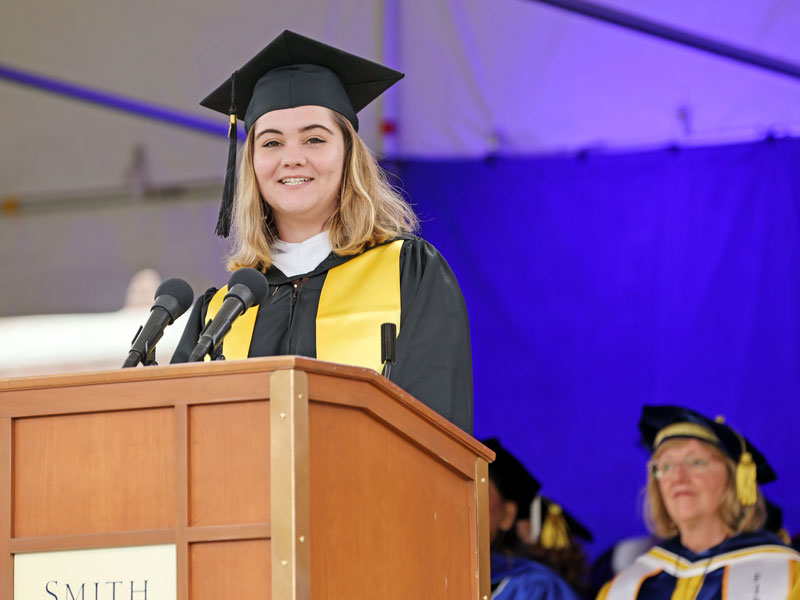 A government major from Milan, Italy, Gallisay ’22 recounted the challenges faced by many students during the pandemic—including fellow international students who were unable to travel home due to COVID-19 restrictions.

In the face of the “whirlwind” of change over the past four years, Gallisay praised her classmates for their strength and resilience. “If I could tell our first-year selves anything, I would say that we did not come this far not to change,” she noted.

Looking ahead, Gallisay urged graduates to rely on the connections they have made at Smith.

“Tomorrow we begin our lives as future teachers, doctors, trailblazers, engineers, change-makers, artists, lawyers and leaders,” she said. “Tomorrow, we begin creating our own legacies. Tomorrow, though we may no longer be on campus, we carry with us the title of Smithie and the home that is Smith College.”

In her closing remarks at Sunday’s ceremony, President Kathleen McCartney expressed gratitude for the positive impact the class of 2022 has already had—and will have in the future.

“Smith has changed each of your lives, and you have changed Smith just as much,” she said. “Smith is a movement and today it carries you forward. May you make that movement your own. May you carry us all forward.”