BY Barbara Solow
Director Kyle Boatwright says joy and authenticity are two of the elements that drew her to “Stoop Pigeons.”

Liv Dunbar ’23 says acting in a Smith production of a play about a New York City neighborhood has “reinvigorated my love for theatre.”

Christin Eve Cato’s “Stoop Pigeons,” about life in a mostly Black and Latino/a community, launches a college theatre season centered on plays by and about women, people of color and gender and sexual minorities.

For Dunbar—who served on a committee of faculty, staff and students formed last spring to create a more inclusive process for choosing plays at Smith—being part of the workshop production has been affirming.

“As a Brown Caribbean Latina, it’s always been important to me to tell our stories in ways that people can relate to,” says Dunbar, who plays a strong-willed Puerto Rican teenager in “Stoop Pigeons.”

“The impact this show has had on me, my cast mates—and, I hope, others who watch the performance—will hopefully convince both new and old theatre Smithies to continue to include more diverse shows like this,” Dunbar says.

Other productions this season include “The Thanksgiving Play” by Larissa FastHorse; “Twilight Los Angeles: 1992” by Anna Deavere Smith; Lisa Kron’s “Fun Home,” based on the graphic novel by Alison Bechdel; and plays written and directed by students.

Efforts to create more representative Theatre Department offerings at Smith are not new, notes Andrea Hairston ’74, Louise Wolff Kahn ’31 Professor of Theatre, who also served on the selection committee. This time, she says, the work benefited from strong student and staff involvement, as well as support from the Office for Equity and Inclusion, which helped the committee identify core principles and a framework for action.

“Theater is an expression of community identity—a bridge from the self to others,” says Hairston. “All of the plays we’ve picked offer that. It’s what our season is about.”

“I have a lot of admiration for what they brought to the process,” says Kramer, who taught a course on “Anti-Racist Theatre” in the spring. “They certainly felt like BIPOC students too rarely saw themselves represented onstage. They took risks in helping us look at what needs to change.”

Students also advocated for plays that illustrate the strengths of underrepresented communities, as well as their struggles.

“A lot of classic theatre focuses on the trauma of being Black and POC,” explains Reina Makimura ’23, a member of the selection committee who is the sound designer for “Stoop Pigeons.”

“We wanted plays that represent Black joy—the depths of culture and race and all the ways it can be shown,” she says.

Director Kyle Boatwright says joy and authenticity are two of the elements that drew her to “Stoop Pigeons.”

“In this play, as in life, nobody is 100 percent good or bad,” notes Boatwright, co-founder and director of Amherst-based Rise Up Productions. “Though the show has its heavy moments, there’s still an abundance of joy in performing and reflecting on the truthful experiences that are represented onstage.” 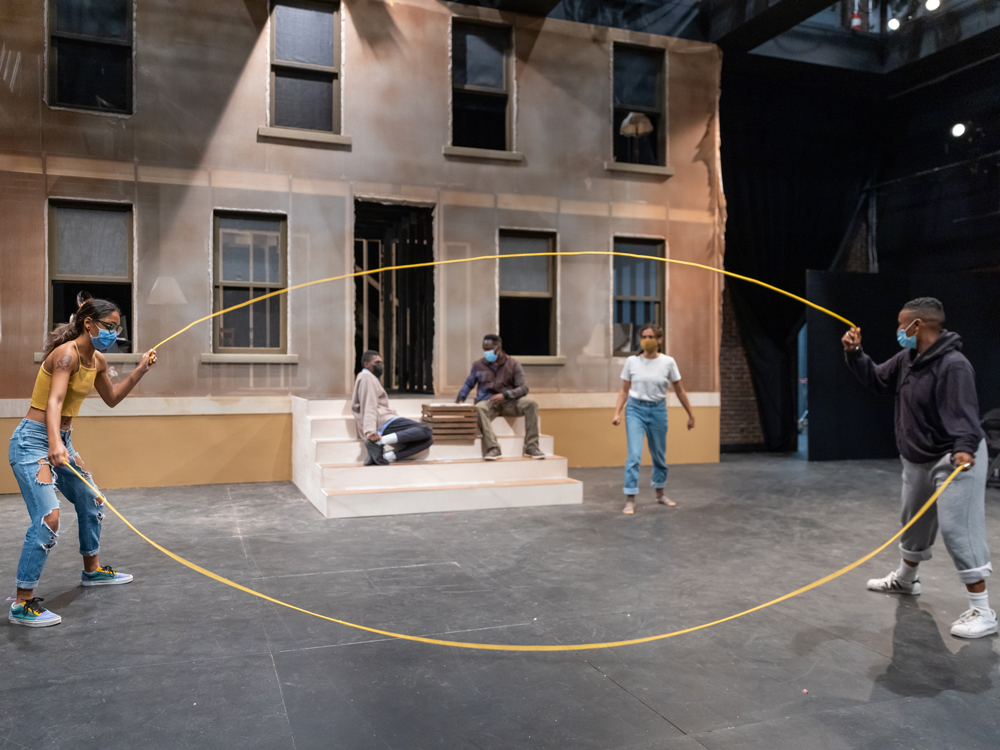 During a recent rehearsal, cast members moved in and out of the set—an artful replica of a New York City apartment building—shouting greetings to each other through open windows, and gathering on the stoop to share secrets, hopes and sorrows.

Boatwright says cast and crew members have had valuable discussions about race, gentrification and other issues raised in “Stoop Pigeons,” which will have a workshop performance at Smith. She hopes audience members will be inspired to do the same.

“When we read ‘Stoop Pigeons’ last year, we just knew it had that power,” says Hendrick-Baker, who plays an Irish-American character in the play. “It’s also been such a joyful and thoughtful space in rehearsal.”

Performances of “Stoop Pigeons” will be held on October 22, 23, 28, 29 and 30 at 7:30 p.m. in Hallie Flanagan Studio Theatre. Attendance is open only to Smith and Five College students, faculty and staff participating in the colleges’ asymptomatic testing programs. Masks and campus IDs are required.

Playwright Christin Eve Cato will be at Smith for a meet-and-greet with Five College and Smith students, faculty and staff in the colleges’ testing programs  on Friday, Oct. 29, at 4:30 p.m. in the Green Room at Mendenhall.

While working on the upcoming Smith production of “Fun Home”—a musical based on Alison Bechdel’s graphic novel—cast and crew members experienced a bit of behind-the-scenes magic: A trip to Special Collections in Neilson Library, where Bechdel’s papers are housed.