When I consider the life and career of legendary landscape architect Cornelia Hahn Oberlander ’44, two images come to mind that together capture her essence: hard-working, determined and visionary. The first image is from a photo of Cornelia in hard hat and rubber boots at a muddy worksite, surrounded by large, very attentive construction workers. The second is a memory I have of Cornelia sitting down at a business meeting, opening her bag and, in her no-nonsense style, laying out the construction elements of a green roof.

Today, Cornelia, at 98, is living and working in Vancouver, Canada, in the house she and her late husband, Peter Oberlander, an architect and regional planner with an international reputation, designed in collaboration with the architect Barry Downs. She was one of the first two women to attend the Graduate School of Design at Harvard, and the first to graduate with a professional degree in landscape architecture. When Cornelia and I met at Smith in 1996 to talk about creating a landscape studies program at her alma mater, she was already a powerful voice and influential designer in landscape architecture; she was known for her environmentally conscious, forward-thinking projects, especially in Canada, where she had settled. She was determined that Smith—with its Frederick Law Olmsted– designed campus—should be among the first liberal arts colleges to train students to look closely at the landscape and to envision new ideas for it.

Now, via quotes I’ve collected, I will let Cornelia’s voice—always strong, lucid and direct— introduce herself and her work. She is the best at expressing her core, powerful engagement with landscape and design.

Her philosophy could be summed up in this quote: “There’s no froufrou here.” There never is, in her work or her words. Her landscapes are places that work, for a sustainable relationship between us and nature. “I work with a concept … driven by the idea that people want to be surrounded by nature—it is in our genes.” (Vancouver Sun, 2001)

“We have, as I have pointed out again and again, a great gift of nature in our landscape.” With these words, Cornelia returned to Smith to begin her work on Smith’s landscape master plan in the mid-’90s, working with landscape architect Shavaun Towers ’71. At the same time, I and a group of my faculty colleagues had begun planning a new program in landscape studies. Months after I heard about Cornelia, her work and her reputation as a force of nature, literally, I met her striding along the path between Neilson Library and Wright Hall, with Paula Deitz ’59 and Susan Komroff Cohen ’62, the two alumnae who launched the Friends of the Botanic Garden and who are, with Cornelia, abiding friends of landscape studies. Cornelia strode up to me, with warmth and force—there is no other way to put it—and immediately offered her support and expertise for the new program. Warmth and force inform Cornelia’s career, her placemaking and her relationships with all of us.

Cornelia is far too inventive, compelling and present to be anything so static as a treasure.

“Ann, do you have pencil and paper?” This was not really a question. Cornelia would give me a list: people to talk to, ways of showing and experiencing sustainable landscape design with our students, language to make the case for the program.

She didn’t stop with me; she also never hesitated to meet with Presidents Dunn, Simmons, Christ and McCartney to offer her suggestions for campus sustainability. She presented her ideas as imperatives: Reduce the number of lawns. Rethink the value of the pond. Show more respect for green space. Allow fewer vehicles on campus. Promote Smith as a leader in campus sustainability.

“Landscape architects are a combination of artists, designers, choreographers and scientists; they must also be leaders, especially in dealing with the effects of climate change.” Those were her words last September when she learned that a $100,000 international landscape architecture prize—given by The Cultural Landscape Foundation of Washington, D.C.—was to be named in her honor.

Landscape architecture today embodies exactly that vision, and Cornelia has brought it to landscape studies at Smith, lecturing in our spring series on landscape, environment and design, visiting classes and studio pinups, and meeting with students. She has lent the influence of her name and her work to our initiatives and to our invitations to speakers across the country. Landscape studies is now a minor, unique in the United States, with alumnae studying in the top schools of landscape architecture and working in the profession.

“I have never not worked,” Cornelia wrote in her SAQ class notes in 2016. In a career that now spans over 70 years, she has created enduring and trailblazing projects, such as the Canadian Chancery in Washington, D.C., the courtyard of the New York Times building (with HMWhite), the Canadian embassy in Berlin and the rooftop garden of the Vancouver Public Library.

That work has given her international recognition as a groundbreaking landscape architect and a powerful voice for sustainable design. She is a pioneer in designing naturalistic playscapes, green roofs and modernist landscape design. Among other accolades, Cornelia has received 12 honorary degrees and the Canadian Governor General’s Medal in Landscape Architecture; she is a distinguished member of Sigma Lambda Alpha, the international honor society of landscape architecture, and a Companion of the Order of Canada. Finally, the jury for the 2015 Margolese National Design for Living Prize said this about Cornelia’s impact on Canadian cities: “She is, quite frankly, a national treasure.”

Maybe so, but in my mind, Cornelia is far too inventive, compelling and present to be anything so static as a treasure. When Smith awarded Cornelia an honorary degree in 2003, I gave a toast about the authority and vision of Cornelia’s work. I connected her placemaking with that of Louis XIV, who wrote his own guide to the gardens of Versailles, using the imperative voice throughout, directing us to follow, pause, turn, observe. And I invoked the 18th-century British landscape architect Lancelot “Capability” Brown, who, with an equally authoritative voice, laid out for his clients the “capabilities,” the potentials of their properties. Central Park and, for that matter, Smith’s campus echo Brown’s vision. As Louis XIV did, Cornelia understands the power of design. Like Capability Brown, Cornelia reads the possibilities of a landscape for our use and for preservation, sustainability and beauty.

Cornelia’s friendship, teaching and advocacy are precious to me and to Smith. And her work—her demand for activist, enduring, sustainable design—is a gift to all of us. 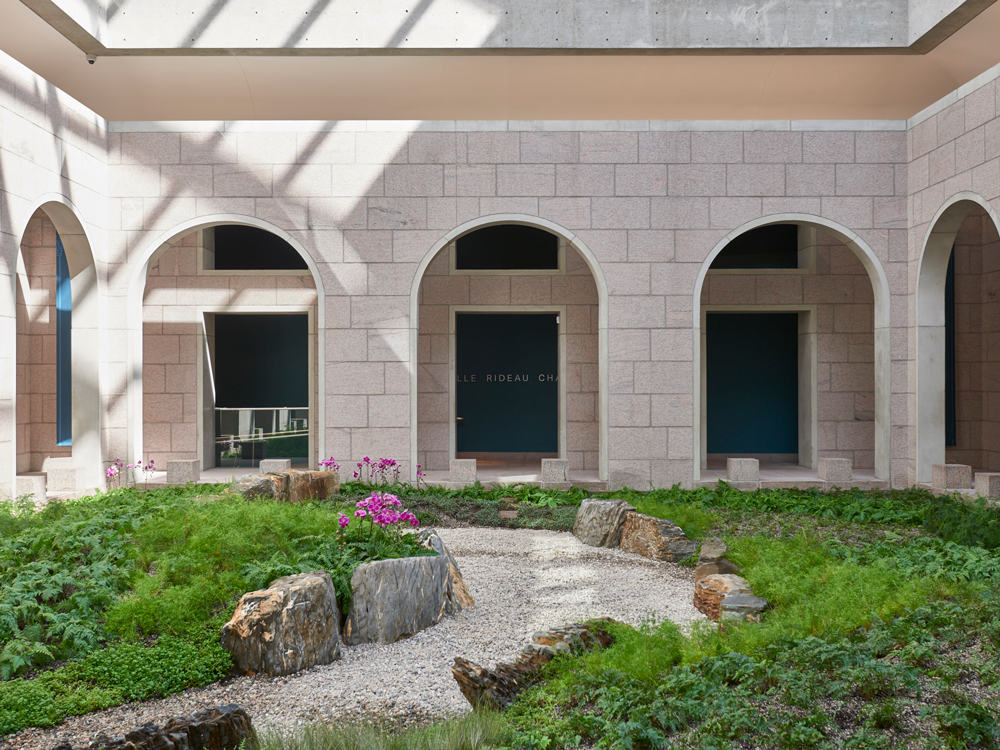 In 2018, Oberlander designed the interior courtyard of the National Gallery of Canada. She designed the outside landscape in the 1980s. Photograph from NGC, Ottawa

Cornelia Hahn Oberlander ’44 has brought her remarkable eye for design and dedication to sustainable practices to landscapes large and small throughout Canada and the United States and Europe. Her career is distinguished by several notable projects and honors, a few of which are listed here.

1950: Developed the landscape plan for a small neighborhood park in Philadelphia, Pennsylvania.

1967: Designed the outdoor playground for the Children’s Creative Centre for the Montreal Expo, which served 30,000 children. Designed 70 playgrounds across Canada and also worked to establish the national Task Force on Play.

1993–96: Partnered with Matsuzaki Wright Architects to design the landscape around the C.K. Choi Building/Institute of Asian Research at the University of British Columbia, considered one of the best examples of environmentally responsible design in North America.

2011: Worked with HM-White Site Architects and architect Renzo Piano to design the courtyard and roof garden for the New York Times building in New York City.

Ann Leone ’71 is professor of French studies and of landscape studies at Smith.

1990 Member of the Order of Canada

2017 LAF Medal of the Landscape Architecture Foundation, its highest honor

2019 International “Oberlander Prize” is named in her honor by the Washington, D.C.–based Cultural Landscape Foundation. The $100,000 prize will be awarded in 2021, her centennial year.

Kimberly Brubaker Bradley ’89 learned recently that she had been named a 2021 Newbery Honoree for her 18th and most recent book, Fighting Words.