Russia, Eurasia and Eastern Europe significantly influence the politics, economy and culture of our global society. Since the end of the Cold War and the fall of Communism, the study of Russia, along with Ukraine, Eastern and Central Europe, the Balkans, Central Asia and the Caucasus, has taken on increased importance. Occupying more than one quarter of the world’s land surface and home to diverse cultures, this region is continuing to undergo major social, economic and political transformation.

The Program in Russian, East European and Eurasian Studies at Smith College coordinates curricular offerings, supports students’ international studies and organizes campus events that let students explore the complex history and contemporary developments of this exciting and ever-changing part of our world.

Get started on your study abroad journey to Almaty, Kazakhstan! Immerse yourself in Russian language and Central Asian culture, meet locals, and travel on guided visits throughout the country. In this info session, you will also have the opportunity to ask any questions you may have.  Pizza lunch available.

A lecture by Kamal Kariem, Ph.D. candidate, Princeton University, in which he will look at regional conservation in Russia’s far east—mainly enacted for the protection of the Amur or Siberian tiger—and the conflicts surrounding the Bikin National Park. Sponsored by the Smith College Russian, East European and Eurasian Studies Program and Lecture Committee.

Spring 2023 REEES and REEES cross-listed courses can be found by going to the Registrar's course search.

Russian language table meets every Friday at lunch in Duckett (dining room C).  When remote, the table meets by Zoom at this link.  Please let me know if you have any questions.  I look forward to seeing you there!

Students in REEES are expected to learn to think critically about the histories, cultures, religions, politics and economies of the region of the former Soviet Union, as well the often competing ideas and interests that have shaped these histories and cultures for the past thousand years.

Students are expected to use their linguistic, cultural and research skills to become informed and engaged citizens of the world

The major in Russian, East European and Eurasian Studies (REEES) allows students to focus on any aspect of the region’s histories, literatures, cultures, religions, or politics, and to develop their own concentration within the major in consultation with their advisor. In developing their concentration, students are encouraged to pursue an interdisciplinary approach, combining coursework in language, government, history, literature, and religion. Students may choose from courses offered both at Smith and through the Five College Consortium; students are also encouraged to study abroad during a summer, semester, or year-long program.

The REEES Program is committed to accommodating students who coordinate their studies in REEES with a second major.

Students who choose the Area Studies Track will gain a working understanding of the history and culture of Russia, Eastern Europe, and Central Asia, and the geopolitical significance of this region in today’s global world. Students will acquire advanced proficiency in Russian or another language relevant to the region. By pursuing coursework in a broad array of disciplines, students will gain an appreciation for the different methodological approaches scholars use in their study of this highly diverse and dynamic region of the world.

The Area Studies track consists of 11 courses, which include the following requirements:

Students are highly encouraged to continue the study of Russian (or another language of the region), especially in a study abroad program, in order to achieve an advanced level of fluency. Credits earned in study-abroad language courses may count toward the fulfillment of the major requirements.

The Language and Literature Track provides the opportunity for students to focus closely on the language, literature, and cinema of Russia, Eastern Europe, and Eurasia. Students are expected to achieve advanced proficiency in Russian or another relevant language, and to engage closely with works of literature and film in the original language of study. While focusing on the language, literature, and cinema of one or more culture in the region, students in this track are also encouraged to explore correlated disciplines represented in the REEES curriculum.

The Language and Literature track consists of 11 courses, which include the following requirements:

While six semesters of language instruction in Russian, as well as courses in other languages of the region, are normally offered at Smith or in the Five Colleges, students in the Language and Literature track are highly encouraged to enroll in a study abroad program (or comparable program in the United States). Credits earned in these language courses will count toward the fulfillment of the Major requirements, while they may also provide the opportunity for students to achieve a higher proficiency in the language.

Additional Guidelines for the Major

The minor is structured to offer students interdisciplinary breadth as well as the opportunity to pursue a particular area of interest within the field of REEES in more depth.

Requirements consist of six 4-credit courses, which include two semesters of language study in addition to four 4-credit REEES-approved courses:

In choosing their courses, students should keep in mind the following:

Students are encouraged to take advantage of the rich offerings in REEES available in the Five College Consortium, which will count toward the major. Consult the Five College REEES website for a current list of approved courses.

With gratitude to artist Catherine Lomoe-Thompson ’21, these drawings are from her memories of her Interterm in St. Petersburg trip: "Russia’s beauty was just begging to be memorialized on the page, and I think I enjoyed drawing it just as much as I enjoyed visiting it."

Professor of Jewish Studies and of World Literatures

In a video produced in spring 2019, three Smith students talk about their experience taking Russian at Smith -- including for the first time! 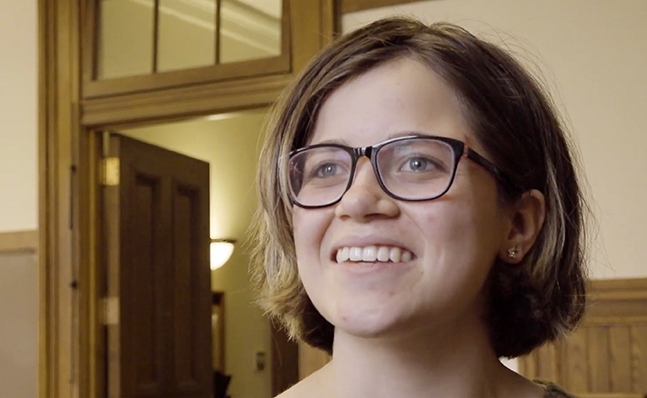 Majors in REEES are strongly encouraged to study abroad in Russia, Eastern Europe or Eurasia for a year, semester or summer.

Courses taken while studying abroad or at an accredited institution during the summer may be counted toward the major; however, students must petition the REEES Advisory Committee to count these courses after the completion of course work.

Russian, East European and Eurasian studies students have had good experiences studying in Russia and other post-Soviet countries through the Bard-Smolny Study Abroad Program and the American Councils for International Education Program (ACTR).

Students are encouraged to explore all options and consult with their advisers about study abroad.

Come experience Russia even if you don't speak the language! Join this program in one of the world’s most beautiful cities and you will:

Hear from students who went this past January to St. Petersburg with Smith to study for three weeks at HSE University in this article.

January 3-20, 2020, with predeparture mandatory meetings in Northampton in November and December 2019.

Students will stay in a centrally located hostel in shared, single-sex room (6-8 people). Breakfast and lunch will be provided at the university cafeteria. Dinner is not provided by the program. Meals during the two-day stay in Moscow are not provided.

The program fee is subject to change.

Financial aid for Smith students will depend on their financial need. Students can also apply for an International Experience grant.

Students must be in good academic standing (a minimum overall GPA 2.5 or above). Due to the length of the visa process, students must have a valid passport by October 1. The passport must be valid at least 18 months after the program ends (it cannot expire earlier than August 1, 2021). We cannot make any exceptions to this rule.

The program is open to Five College students.

Students can find the application materials and apply to the program online using the Smith International Travel Experiences System (SITES).

Envisioned by Peter the Great as the "Window to the West" and created by French and Italian architects, St. Petersburg became a testimony to opulence with golden palaces, pastel-colored mansions and landscaped parks, gardens and canals. Having endured the horrors of World War II and Stalinist repression, the people now cope with a new political and economic reality. Known as Leningrad from 1924 to 1991, the city of nearly five million is easily navigated by foot, bus, trolley and an efficient metro system.

In post-socialist states culture is not only exploited as a resource for shaping national communities, but it has also become a form of politics – the terrain of interstate relations of the former state socialist regimes and of their domestic policy as well. We will look closer at the arguments from the sphere of culture that have migrated into the political narratives and practices. Using the rich material of Post-Soviet cultural history of Russia we will try to understand not only a specific role that culture played in post-socialist societies but also the workings of culture in today’s societies across the globe. In particular, we will explore how the state administration of cultural production and civil society’s requirements for the cultural sphere as a sphere of social autonomy mediate, compete and negotiate with each other. Throughout the course we will define culture as a sphere of symbolic values, social practices, political resource as well as a material reality determining concrete physical parameters for communication between human subjects and their cultural environments.

This course examines the fall of the Russian Empire. With Russian literature and first-hand accounts as our guides, we will explore the social and political tensions of the modernizing empire from victory over Napoleon to the Red and White Terror. Our central question will be: how did political leaders and elites coexist and interact with their subject populations, and particularly the educated stratum that often questioned authoritarian rule? We will encounter the last Romanov tsars as well as peasants and nobles, merchants and usurers, Tatars and Jews, conservatives and revolutionaries. Exploring primary sources and cutting-edge historical scholarship we will seek to understand people‟s choices and expectations that have not only witnessed history but have shaped it.

This course offers an introduction to gender history with a focus on the Soviet period. Along with close examination of both classic and the more recent texts in Soviet gender history, the students will be introduced to various ways of writing it, including focus on the ideological work of gender, politics of the family in the Soviet Union, gender and the welfare state, and the topics of age, sexuality and the body. The course seeks to further develop the students’ ability to think critically about gender history, its major genres, themes, and analytical practices, past and present. The students are also expected to become familiar with specific sources, methods, and approaches in the field of Soviet gender history.

In Northampton, prior to departure, students attend three lectures to introduce them to Russia and St. Petersburg and familiarize themselves with the historic and cultural context of their destination. Students will register for RES 105 St. Petersburg: History, Politics and Culture: Interterm in Russia, a two-credit course.

The academic program with co-curricular field trips is supplemented with extracurricular excursions and cultural and social activities. You will explore the city through a series of visits to museums (including the world-famous Hermitage), concerts, ballets and other events.

Russian Programs in the Pioneer Valley

Students can draw on the resources of faculty members at the Five Colleges and coordinate curricula across the five campuses.

The Five College Slavic Seminar serves as a forum for faculty members and graduate students to discuss work in progress.