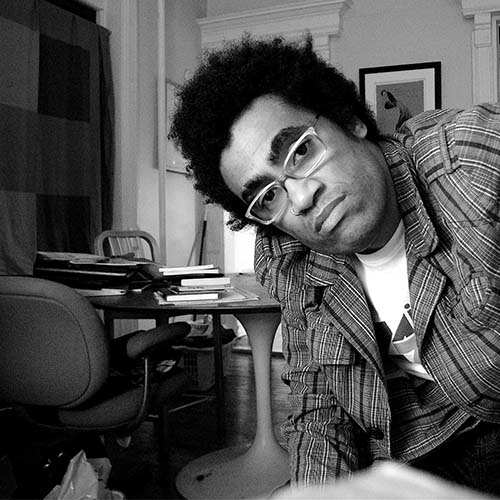 Born and raised in Washington, D.C., and educated at Paul Lawrence Dunbar High School, Thomas Sayers Ellis attended Harvard for a while, studying with Seamus Heaney and serving as a teaching assistant for Spike Lee, and working at the Harvard Film Archive and the Grolier Poetry Bookshop. While living in Cambridge, Ellis cofounded the Dark Room Collective, a network of African American poets that included Kevin Young, Natasha Trethaway, Tracy K. Smith, and Major Jackson. He went on to take his MFA at Brown University in 1995.

Ellis’ powerhouse debut collection The Maverick Room (Graywolf Press) earned him both a Mrs Giles Whiting Writers’ Award and the 2006 John C. Zacharis First Book Award. Exploding with inner-city youth culture energy, noted for its “percussive prosody,” as he calls it, The Maverick Room takes its name from a now-defunct go-go club Ellis frequented as a teen, and it brims with rhythm, sass and self-deprecating wit. He works the page the way his musical subjects work a room.

Ellis has said that “funk meets formalism” in his work which blends poetic devices with creative riffing. These gregarious, socially conscious, and ever-surprising poems dissect, embrace and reject traditional tropes of African American literature, and then take a linguistic swerve toward Gertrude Stein.

Recipient of fellowships from the Fine Arts Work Center in Provincetown, Yaddo, the MacDowell Colony, and the Bread Loaf Writer’s Conference, Ellis has also published two chapbooks, The Good Junk and The Genuine Negro Hero, and co-edited the anthology On the Verge: Emerging Poets & Artists, and edited the forthcoming Quotes Community: Notes for Black Poets. Individual poems have appeared in many journals and anthologies, including Poetry, Grand Street, Tin House, Ploughshares, and The Best American Poetry, 1997 and 2001.

Ellis serves as contributing editor to Callaloo and Poets & Writers magazine, and teaches at Sarah Lawrence College and the MFA program at Lesley University.

A Kiss In The Dark

In our community everything was kept quiet,
behind closed doors. When dogs got stuck
it was because one was hurt and the other
was a friend, helping it home—just like a friend.
Once Reverend Gibson ran from the church
with a bucket of hot water, and when it separated them,
they sang. That’s why it was such an event,
a mistake equivalent to sin, when my parents
left their bedroom light on, door open.

Mistakes are what gave light to that tiny apartment
darkness tried to conquer. And imagination,
how there had to be more to it than
the quick & crude. He put it in and he took it out.

A naked bulb on the dresser next to where
they made me made them celebrities, giants, myth.
I watched their black shadows on the wall,
half expecting fade-out and something romantic
as the final scene of Love Crazy, my father
a suave William Powell, my mother’s slender body
a backwards C in the tight focus of his arms—
close shot, oneiric dissolve and jump cut to years
before their separation and the arrival of hot water.

All Their Stanzas Look Alike

I guess
I got it
from you,

this habit
of clenching
my face
into a fist,

this brutal
looking into,

her way
of seeing things,

one eye
clearly unable
to reach
as far as
the other.

A childhood
plagued
by headaches

from straining
and watching
far too
much TV,

up close,
so nothing
would escape.

Then at ten
I got an
inexpensive gift,

one that held
images up

Imitating
the kids
who were
supposed to be
friends,

I blinked
and blinked,

testing
my sight with it—
perfect visio
in my right eye,

but the left one
was weaker.

to our already
veiled corner
of the world.

We left linked,
two good eyes
between us,

joined by
our shared flaw.

She passing
her gift,

me making myth
with it.