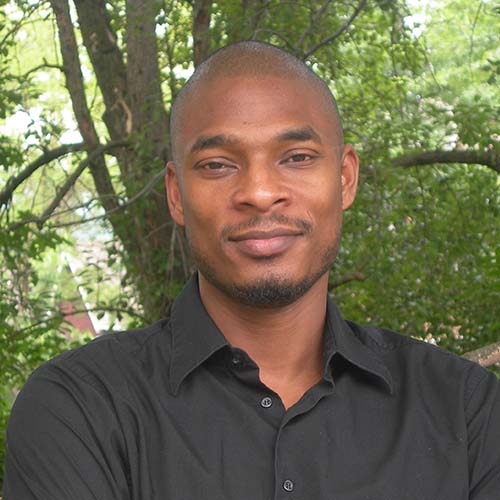 The day after Trump’s election, Terrance Hayes wrote the first of the seventy sonnets that comprise his new collection, American Sonnets for My Past And Future Assassin (Penguin Books, 2018). In poems that are in turn elegiac, funny, solemn and vengeful, Hayes engages with American politics, racism, history and artistic heritage. "Our sermon/Today sets the beauty of sin against the purity of dirt," Hayes writes, inviting his readers to examine & dismantle conventional ways of generating meaning that have historically diminished or ignored voices of color. American Sonnets was a finalist for the 2018 National Book Award and was shortlisted for the T.S. Eliot Prize for Poetry. Hayes, a MacArthur Fellow and the author of six books of poetry, is also the recipient of a National Book Award and a Guggenheim Fellowship, among numerous other honors. He is currently a Chancellor of the Academy of American Poets, as well as a professor of English at New York University.

Woofer (When I consider the African-American)

When I consider the much discussed dilemma
of the African-American, I think not of the diasporic
middle passing, unchained, juke, jock, and jiving
sons and daughters of what sleek dashikied poets
and tether fisted Nationalists commonly call Mother
Africa, but of an ex-girlfriend who was the child
of a black-skinned Ghanaian beauty and Jewish-
American, globetrotting ethnomusicologist.
I forgot all my father’s warnings about meeting women
at bus stops (which is the way he met my mother)
when I met her waiting for the rush hour bus in October
because I have always been a sucker for deep blue denim
and Afros and because she spoke so slowly
when she asked me the time. I wrote my phone number
in the back of the book of poems I had and said
something like “You can return it when I see you again”
which has to be one of my top two or three best
pickup lines ever. If you have ever gotten lucky
on a first date you can guess what followed: her smile
twizzling above a tight black v-neck sweater, chatter
on my velvet couch and then the two of us wearing nothing
but shoes. When I think of African-American rituals
of love, I think not of young, made-up unwed mothers
who seek warmth in the arms of any brother
with arms because they never knew their fathers
(though that could describe my mother), but of that girl
and me in the basement of her father’s four story Victorian
making love among the fresh blood and axe
and chicken feathers left after the Thanksgiving slaughter
executed by a 3-D witch doctor houseguest (his face
was starred by tribal markings) and her ruddy American
poppa while drums drummed upstairs from his hi-fi woofers
because that’s the closest I’ve ever come to anything
remotely ritualistic or African, for that matter.
We were quiet enough to hear their chatter
between the drums and the scraping of their chairs
at the table above us and the footsteps of anyone
approaching the basement door and it made
our business sweeter, though I’ll admit I wondered
if I’d be cursed for making love under her father’s nose
or if the witchdoctor would sense us and then cast a spell.
I have been cursed, broken hearted, stunned, frightened
and bewildered, but when I consider the African-American
I think not of the tek nines of my generation deployed
by madness or that we were assigned some lousy fate
when God prescribed job titles at the beginning of Time
or that we were too dumb to run the other way
when we saw the wide white sails of the ships
since given the absurd history of the world, everyone
is a descendant of slaves (which makes me wonder
if outrunning your captors is not the real meaning of Race?).
I think of the girl’s bark colored, bi-continental nipples
when I consider the African-American.
I think of a string of people connected to one another
and including the two of us there in the basement
linked by a hyphen filled with blood;
linked by a blood filled baton in one great historical relay.

American Sonnet for My Past and Future Assassin

The song must be cultural, confessional, clear
But not obvious. It must be full of compassion
And crows bowing in a vulture’s shadow.
The song must have six sides to it & a clamor
Of voltas. The song must turn on the compass
Of language like a tangle of wire endowed
With feeling. The notes must tear & tear,
There must be a love for the minute & minute,
There must be a record of witness & daydream,
Where the heart is torn or feathered & tarred,
Where death is undone, time diminished,
The song must hold its own storm & drum,
And shed a noise so lovely it is sung at sunset
Weddings, baptisms & beheadings henceforth.

from AMERICAN SONNETS FOR MY PAST AND FUTURE ASSASSIN (Penguin, 2018)

American Sonnet for My Past and Future Assassin

from AMERICAN SONNETS FOR MY PAST AND FUTURE ASSASSIN (Penguin, 2018)