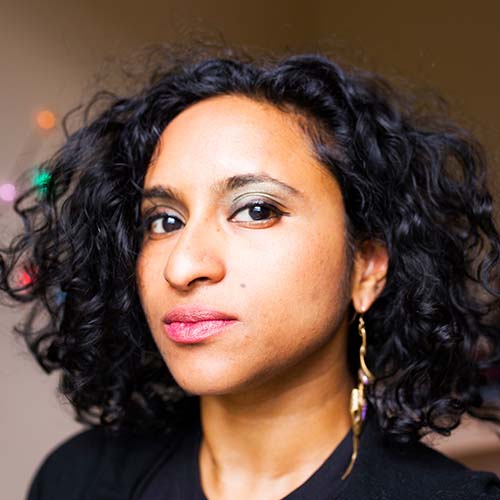 Tarfia Faizullah “twines a seam where wounds are re-membered, fingers quivering, spooling and unspooling what we know of healing,” writes Khaled Mattawa, a Chancellor of the Academy of American Poets. Faizullah grew up in West Texas and graduated with an MFA from Virginia Commonwealth University. She traveled to Bangladesh on a Fulbright Fellowship to interview the birangona: a Bangladeshi name for the 200 to 400,000 women subjected to crimes against humanity in the 1971 Liberation War. The interviews gave rise to Faizullah’s first collection Seam (Southern Indiana Press, 2014), winner of the Crab Orchard Series in Poetry’s First Book Award. Faizullah’s other honors include the Dorothy Sergeant Rosenberg Prize, the VIDA award in poetry, and the Ploughshares Cohen Award. She has also been the recipient of fellowships from Kundiman, the Kenyon Review, and Bread Loaf Writer’s Conference.

The surviving birangona recounted their sexual and spiritual violation by Pakistani soldiers, from which Faizullah crafted haunting and complex portraits. While she acknowledges the failure of language to fully encapsulate human suffering, she was able to use her voice to reveal the complex emotional resonances of one of the most wide-scale atrocities committed against women in world history. Poems about the birangona mingle with others that describe the speaker’s emotional life and journey through Bangladesh. Faizullah has said that Seam “narratively and structurally relies on distance: between two continents and cultures as well as between the year of Bangladesh’s independence and its modern moment.” These distances create what poet Aimee Nuzhukumatahil calls “a stunning double-portrait of the artist as the visitor and as the visited.”

Since the publication of Seam, Faizullah’s work has been featured in journals such as Hobart, Diode, and Poetry magazine. In a 2015 guest essay for Poetry titled “Against Explanation,” she writes that “there is nothing more privately mortal than a poem: its hidden cracks and crevices that only a creator knows, but are bare to everyone.” This private mortality is foregrounded by Faizullah’s knack for mystery, the stories which Natasha Trethaway has noted are “made more harrowing for what’s not said—the poet’s wise and elegant restraint.”

Along with co-founding and directing the Organic Weapon Arts chapbook press and video series with Jamaal May, Tarfia Faizullah is the Nicolas Delbanco Visiting Professor of Poetry in the Helen Zeil Writer’s Program at the University of Michigan and a contributing editor for The Offing. Her next book, Register of Eliminated Villages, will be published by Graywolf press in late spring 2017.

In west Texas, oil froths
luxurious from hard ground
while across Bangladesh,

your grandmother down worn
stone steps to the old pond,
waits breathless for her

water––the same color,
your mother thinks, as
a dress she’d like to twirl

the world in. She knows
the strange men joining
them daily for meals mean

her no harm––they look like
her brothers do nights they
jump back over the iron gate,

drenched in the scents of else-
where––only thinner. So thin––
in the distance, thunder,

through the sky reflected
in the water her mother
floats in burns bright blue.

8. After the war was over, what did you do? Did you go back home?

I stood in the dark
doorway. Twilight. My grandfather’s

handprint raw across my face. Byadob,
he called me: trouble-

maker. How could you let them
touch you? he asked, the pomade just

coaxed into his thin hair
a familiar shadow of scent

between us even as he turned
away. Leave. Don’t come

back, he said. I walked past his
turned-away back. Past fresh-plucked

on the doorstep sifting through rice flour,
refusing or told not

to look up, though the new
president has wrapped me in our new

flag: a red sun rising
across a green field. You

saved our country, he said. I said
nothing. The dark rope

of Mother’s shaking arm was what
I last saw before I walked away.

Because the sky burned, I had to unhinge
from the window the mesh screen
to step out onto the roof where the world was
an orange freshly peeled. I held

to my nose fingertips scented with spring.
Beside me fluttered the wings
of another promise I made you but didn’t keep.
I sat there for hours until my thighs

were raw, cut open by those rough shingles
I didn’t know yet how to run
or tether myself farther and farther afield.
This was before the other daughter

died and only one of us wept, but long after
those old pumpjacks no longer
needled the horizon clean. The velvet mat stayed
unfolded, but I told y’all I prayed

anyway. The sky was famished with stars
I couldn’t help but count each scorched one.