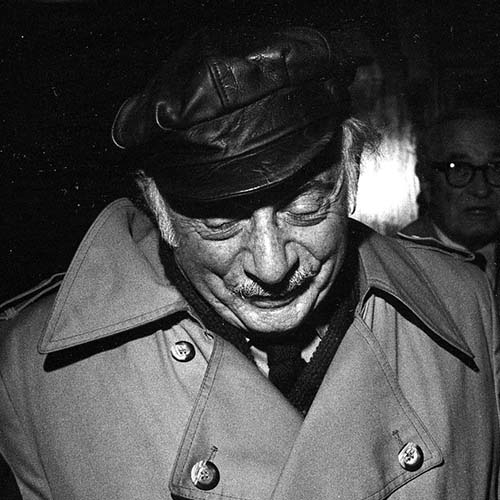 A living legend and a giant of American letters, Stanley Kunitz has published twelve books of poetry in the last seventy years. He served as the Poet Laureate of the United States for 2000 and 2001. At the age of ninety-six, Kunitz is one of America’s most important and lasting voices. He lives in New York City and in Provincetown, Massachusetts, where he tends his famous garden.

Founder of both the Fine Arts Work Center in Provincetown and Poets House in New York City, Kunitz’ myriad honors include the Pulitzer Prize (1959, for Selected Poems: 1928-1958), the Bollingen Prize (1987), the National Medal of Arts (1993), and the National Book Award (1995, for Passing Through: Later Poems, New and Selected).

Kunitz has astonished the literary world by getting only better with age. Carolyn Forché calls him “a living treasure.” Of Kunitz’ later poems, David Barber of The Atlantic Monthly writes, “They are, in all their outward simplicity and inward mystery, perhaps the closest that American poetry has come in our time to achieving and urgency and aura that deserve—even demand—to be called visionary.”

My mother never forgave my father
for killing himself,
especially at such an awkward time
and in a public park,
that spring
when I was waiting to be born.
She locked his name
in her deepest cabinet
and would not let him out,
though I could hear him thumping.
When I came down from the attic
with the pastel portrait in my hand
of a long-lipped stranger
with a brave moustache
and deep brown level eyes,
she ripped it into shreds
without a single word
and slapped me hard.
In my sixty-fourth year
I can feel my cheek
still burning.

I have walked through many lives,
Some of them my own,
and I am not who I was,
though some principle of being
abides, from which I struggle
not to stray.
When I look behind,
as I am compelled to look
before I can gather strength
to proceed on my journey,
I see the milestones dwindling
toward the horizon
and the slow fires trailing
from the abandoned camp-sites,
over which scavenger angels
wheel on heavy wings.
Oh, I have made myself a tribe
out of my true affections,
and my tribe is scattered!
How shall the heart be reconciled
to its feast of losses?
In a rising wind
the manic dust of my friends,
those who fell along the way,
bitterly stings my face.
Yet I turn, I turn,
exulting somewhat,
with my will intact to go
wherever I need to go,
and every stone on the road
precious to me.
In my darkest night,
when the moon was covered
and I roamed through wreckage,
a nimbus-clouded voice
directed me:
“Live in the layers,
Not on the litter.”
Though I lack the art
to decipher it,
no doubt the next chapter
in my book of transformations
is already written.
I am not done with my changes.

Summer is late, my heart.
Words plucked out of the air
some forty years ago
when I was wild with love
and torn almost in two
scatter like leaves this night
of whistling wind and rain.
It is my heart that’s late,
it is my song that’s flown.
Outdoors all afternoon
under a gunmetal sky
staking my garden down,
I kneeled to the crickets trilling
underfoot as if about
to burst from their crusty shells;
and like a child again
marveled to hear so clear
and brave a music pour
from such a small machine.
What makes the engine go?
Desire, desire, desire.
The longing for the dance
stirs in the buried life.
One season only,
and it’s done.
So let the battered old willow
thrash against the windowpanes
and the house timbers creak.
Darling, do you remember
the man you married? Touch me,
remind me who I am.