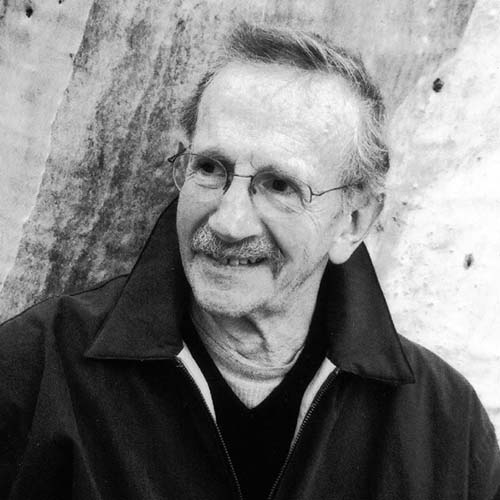 Levine was born and raised in Detroit, Michigan, and has lived for many years in Fresno, California and New York City, where he teaches at NYU. Recipient of awards and honors too numerous to mention, he has also published books of essays, translated Gloria Fuertes and Jaime Sabines, and edited The Essential Keats.

Committed “to saving from oblivion what is thought of as ordinary life” (poet Edward Hirsch), Levine’s work celebrates memory, family, the working class, and the immigrant experience, and has been an inspiration to a generation of young American poets.

Black Stone On Top Of Nothing

Still sober, César Vallejo comes home and finds a black ribbon
around the apartment building covering the front door.
He puts down his cane, removes his greasy fedora, and begins
to untangle the mess. His neighbors line up behind him
wondering what’s going on. A middle-aged woman carrying
a loaf of fresh bread asks him to step aside so she
can enter, ascend the two steep flights to her apartment,
and begin the daily task of preparing lunch for her Monsieur.
Vallejo pretends he hears nothing or perhaps he truly
hears nothing so absorbed is he in this odd task consuming
his late morning. Did I forget to mention that no one else
can see the black ribbon or understand why his fingers
seem so intent on unraveling what is not there? Remember
when you were only six and on especially hot days you
would descend the shaky steps to the cellar hoping at first
that someone, perhaps your mother, would gradually
become aware of your absence and feel a sudden seizure
of anxiety or terror. Of course no one noticed. Mother
sat for hours beside the phone waiting, and now and then
gazed at summer sunlight blazing through the parlor curtains
while below, cool and alone, seated on the damp concrete
you watched the same sunlight filter through the rising dust
from the two high windows. Beside the furnace a spider
worked brilliantly downward from the burned-out, overhead bulb
with a purpose you at that age could still comprehend.
1937 would last only six more months. It was a Thursday.
Rain was promised but never arrived. The brown spider worked
with or without hope, though when the dusty sunlight caught
in the web you beheld a design so perfect it remained
in your memory as a model of meaning. César Vallejo
untangled the black ribbon no one else saw and climbed
to his attic apartment and gazed out at the sullen rooftops
stretching southward toward Spain where his heart died. I know this.
I’ve walked by the same building year after year in late evening
when the swallows were settling noiselessly in the few sparse trees
beside the unused canal. I’ve come when the winter snow
blinded the distant brooding sky. I’ve come just after dawn,
I’ve come in spring, in autumn, in rain, and he was never there.

A child wakens in a cold apartment.
The windows are frosted. Outside he hears
words rising from the streets, words he cannot
understand, and then the semis gear down
for the traffic light on Houston. He sleeps
again and dreams of another city
on a high hill above a wide river
bathed in sunlight, and the dream is his life
as he will live it twenty years from now.
No, no, you say, dreams do not work that way,
they function otherwise. Perhaps in the world
you’re right, but on Houston tonight two men
are trying to change a tire as snow gathers
on their shoulders and scalds their ungloved hands.
The older one, the father, is close to tears,
for he’s sure his son, who’s drunk, is laughing
secretly at him for all his failures
as a man and a father, and he is
laughing to himself but because he’s happy
to be alone with his father as he was
years ago in another life where snow
never fell. At last he slips the tire iron
gently from his father’s grip and kneels
down in the unstained snow and unbolts the wheel
while he sings of drinking a glass of wine,
the black common wine of Alicante,
in raw sunlight. Now the father joins in,
and the words rise between the falling flakes
only to be transformed into the music
spreading slowly over the oiled surface
of the river that runs through every child’s dreams.

The ship that took my mother to Ellis Island
Eighty-three years ago was named “The Mercy.”
She remembers trying to eat a banana
without first peeling it and seeing her first orange
in the hands of a young Scot, a seaman
who gave her a bite and wiped her mouth for her
with a red bandana and taught her the word,
“orange,” saying it patiently over and over.
A long autumn voyage, the days darkening
with the black waters calming as night came on,
then nothing as far as her eyes could see and space
without limit rushing off to the corners
of creation. She prayed in Russian and Yiddish
to find her family in New York, prayers
unheard or misunderstood or perhaps ignored
by all the powers that swept the waves of darkness
before she woke, that kept “The Mercy” afloat
while smallpox raged among the passengers
and crew until the dead were buried at sea
with strange prayers in a tongue she could not fathom.
“The Mercy,” I read on the yellowing pages of a book
I located in a windowless room of the library
on 42nd Street, sat thirty-one days
offshore in quarantine before the passengers
disembarked. There a story ends. Other ships
arrived, “Tancred” out of Glasgow, “The Neptune”
registered as Danish, “Umberto IV,”
the list goes on for pages, November gives
way to winter, the sea pounds this alien shore.
Italian miners from Piemonte dig
under towns in western Pennsylvania
only to rediscover the same nightmare
they left at home. A nine-year-old girl travels
all night by train with one suitcase and an orange.
She learns that mercy is something you can eat
again and again while the juice spills over
your chin, you can wipe it away with the back
of your hands and you can never get enough.