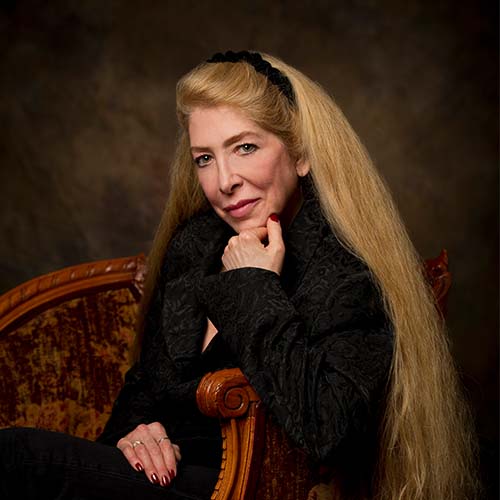 Lucie Brock-Broido’s poems are lenses through which her readers get a glimpse of the ethereal, magical, and dark world she inhabits. In Stanley Kunitz’s words, her “brilliant nervosity and taste for the fantastic impel her to explore the obscure corners of the psyche and the fringes of ordinary human experience.” Brock-Broido describes herself as “a compulsive practitioner of magical thinking,” adding that “poetry is the skin that I have between my body and the world’s body.”

Born in Pittsburgh, Brock-Broido earned her Bachelor’s and Master’s degrees at Johns Hopkins University, and her Master of Fine Arts at Columbia. Her poems have been published in a broad range of literary journals and magazines, including The Paris Review, The New York Times, Parnassus: Poetry in Review, Poetry, The Nation, The New Republic, Best American Poetry, and The New Yorker. She is the author of four volumes poetry—Hunger, The Master Letters, Trouble in Mind, and, most recently, Stay, Illusion, which was a finalist for both the National Book Award and the National Book Critics Circle Award.

Vanity Fair proclaimed that with “exceptional richness, metaphorical flamboyance, and musicianship, the poems in Lucie Brock-Broido’s soaring Stay, Illusion mourn her father, victims of the death penalty, and others lost.” According to the National Book Award judges’ citation, “these poems open up the channels between the living and the dead, allowing for a hypnotic conversation that is as piercing as it is utterly breathtaking.” A disciple of Emily Dickinson and Wallace Stevens, Brock-Broido’s voice has developed with resonances of previous generations. In a 2012 interview with Poetry Magazine, she said “I think we’re all in conversation on the page with that which came before us, or even during us. We inherit whatever canon we’re in the midst of, a great collective influenza.”

Brock-Broido has received fellowships from the National Endowment for the Arts and the Guggenheim Foundation, as well as The Witter-Bynner Prize from the American Academy of Arts & Letters, and the Massachusetts Book Award. A dedicated teacher, she has held positions at Bennington, Princeton, Harvard, and Columbia, where she won the Presidential Award for Excellence in Teaching in 2013.

Cave Painting of a Dun Horse

He is stretching on the all, appears to be in motion.
He cannot turn his head, but you can glean his eye

By candlelight, a catastrophe of ochre hope.

I know little else having shook loose from my own mane
All that would be true if I said it to be so.

White canes humble through the night.

In the years, most of what I made I made up.

The etching of your dying is as cutting as it was
That many years ago, when I chose its acid touch for you.

There have been two wars.

I have read religiously, mostly texts which have red spines.

I had dreams that were inhumane to me.

The smaller the light to write becomes, the more
I have to say to you.

For A Clouded Leopard In Another Life

You were a seed still in Darwin’s left breast pocket,
Not imagined yet, almost invisible in the felt
There just above his heart,
The bluey nubbin sleeping in a child’s
Unmarried arms.
Things vanish in the morning when we wake
Like loam that only grows on buttermilk, at night.
In April, a tiny feline on the ledges of a billow cloud,
Or like the finch let loose in the mossery, you were ended
Unexpectedly; what is only left of you is only me.


No feeding on wisteria. No pitch-burner traipsing
In the nettled woods. No milk in metal cylinders, no
Buttering. No making small contusions on the page
But saying nothing no one has not said before.
No milkweed blown across your pony-coat, no burrs.
No scent of juniper on your Jacobean mouth. No crush
Of ink or injury, no lacerating wish.
Extinguish me from this.
I was sixteen for twenty years. By September I will be a ghost
And flickering in unison with all the other fireflies in Appalachia,
Blinking in the swarm of it, and all at once, above
And on a bare branch in a shepherd’s sky.      No dove.
There is no thou to speak of.