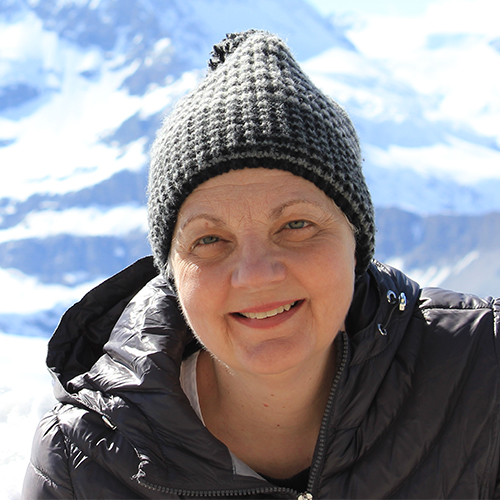 Taking its title from Heraclitus’s famous fragment—“You cannot step into the same river twice”—KATHLEEN GRABER’s new collection interweaves philosophy, personal narrative, and the flotsam of contemporary life to explore ideas linked to impermanence, change, language, and community. Poet Linda Gregerson has described Graber as “one of the finest poets working in America today; no one can surpass her for musicianship or moral penetration,” and Tracy K. Smith has praised Graber’s lyric philosophy as “supreme consolation” in this troubled era. In addition to The River Twice (Princeton University Press, 2019), Graber is also the author of The Eternal City (2010), chosen for the Princeton Series of Contemporary Poets and a finalist for the National Book Award, and Correspondence (2006), winner of the Saturnalia Books Poetry Prize. She teaches creative writing and literature at Virginia Commonwealth University.

America, I know I could do better by you,

though I stoop conscientiously three times a day

to pick up my dog's waste from the grass

with black biodegradable bags. And lest you suspect

that this is more pretension than allegiance, know

my dog was the one at the shelter no one else

would take. He is fat & lazy & I could do better

by him as well, though I do not know if a long walk

in the park in ninety-seven-degree heat is a good idea.

Please cue a presidential sound bite to reassure me

all hearts are more resilient than I think. I confess

it would have been a moral error to have embraced him

if I did not have the means to keep him fed. But

I am writing tonight because there is something wrong

with your peaches. The ones from the supermarket

are so soft & cheap—half the cost of the ones

sold at the local farm—but the flesh near the pit

is so bitter & green. It is a fruit like the mind

we are making together: both overripe & immature.

Trust me, I still have the simple tastes you gave me:

I am delighted by the common robins & cardinals,

the way they set the trees at dusk aflame. Thank you

for Tuesday's reliable trash collection. If you are

constellated somehow, a little bit inside

each of your people, I am sorry that there is more

& more of you lately I do not understand.

Sometimes I want simply to sit alone a long time

in silence. America, you must want this too.

America, I have a friend for whom everything went south

after the death of her cat. It seems melodramatic

& hyperbolic to say so, though sometimes

even the melodramatic & hyperbolic are true. Another truth:

She saw it coming, but there was nothing she could do.

First, she adopted two feral kittens someone had found

in a garage, & when that didn't work, she phoned

the local shelter & took in five more. Like the everything

that unfolded thereafter, the opening act was slower

& more complicated than I am making it now. Today,

into a blizzard & back. Someone in a control tower

somewhere should have known this was a bad idea—

something we all wake up early in order to discover

we don't actually have to do. But there was no red alert

from the airline in the inbox above the forwarded story

of a tortoiseshell cat in Florida which had found its way

two hundred miles home. America, because we would like

to know where we are going & what we will find,

scientists have released animals inside planetariums

& tied magnets to the heads of turtles in order to prove

that it is possible to set them off course. They have

surgically removed most of the anatomy from living

homing pigeons & still, we are stick with the words

Do not be ashamed. Who doesn't have a hungry wilderness

inside? On the plane, I saw between a Jehovah's Witness

& a student of cognitive psychology on his way to a job

at a memory lab. She read aloud her favorite passages

about love & judgement. She said, The Lord gave us a change

to be gardeners and look what we've done. America,

we know seabirds only fly on starry nights & the dung beetle

pushes its golden ball in a perfectly straight line, using

the Milky Way as its guide. Sometimes I try to forget

where I am. Who would not feel frightened on a burning

planet? In a radioactive sea? It's not faith or loyalty. Only face.

We are small & afield. Give me your hand in the dark.

America, I would like to get closer to you, but

you are the unconscious patient. One hundred interns

bicker this morning above your bed. Yesterday,

I read for no reason an essay written a decade ago

with accurate predictions is that sometimes people

are weary metaphors. The poor, who are now homeless—

displaced by a storm—rest their heads tonight

in luxury beachfront hotel rooms. All I want,

one woman says, is my old kitchen where I could cook

a hot meal for my kids. Soon a young man will walk

into a classroom of six-year-olds & empty his gun.

The problem with life is that everyone who dies

to be euthanized. Born deaf, they are losing their vision.

Trained as shoemakers, they have spent every day

side by side. Another sibling says they have battled

pain all of their lives. They say they cannot imagine

being able to know one another by touch.

When my brother was failing, his wife roamed the ward

wild-eyed and inconsolable. It's not what it seems,

she whispered when she thought no one could hear.

his eyes and be fine. The day he died a surgeon

offered to install a system of shunts that would not

have saved him. They would, however, have drained

the fluid collecting around his heart. My brother

had left papers that said I should be the decider.

He died because anything more could happen.

This is all I remember. I have no idea what I said.