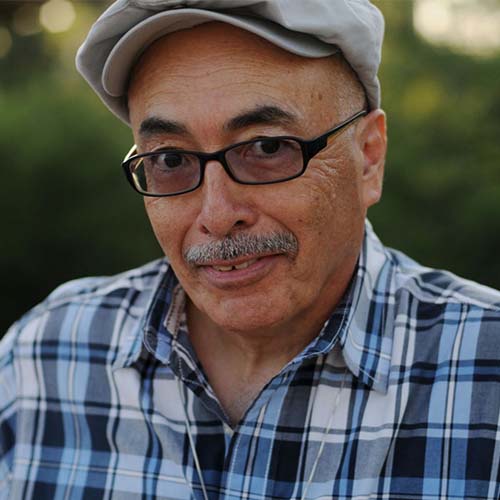 Juan Felipe Herrera was the 21st United States Poet Laureate from 2015-2017—the first Latino to be appointed to the post. Each laureate brings a different focus to his/her tenure. Herrera’s is clear: “I’m here to encourage others to speak, to speak up and write with their voices and their family stories and their sense of humor and their deep concerns and their way of speaking their own languages.”

The son of migrant farm workers in California, Herrera’s was a nomadic childhood. His mother recited poetry and taught him songs from the Mexican Revolution. Inspired by her spirit, he has spent his life, as The Washington Post put it, “crossing borders, erasing boundaries and expanding the American chorus.”

A prize-winning author of 29 books, Herrera’s honors and awards are legion, including two Latino Hall of Fame Poetry Awards and fellowships and grants from the NEA, the Stanford Chicano Fellows Program, and the Guggenheim Foundation. In 2011 he was elected a Chancellor of the Academy of American Poets. His numerous collections of poetry include Senegal Taxi (2013); Half of the World in Light: New and Selected Poems (2008), winner of the National Book Critics Circle Award; 187 Reasons Mexicanos Can’t Cross The Border: Undocuments 1971-2007; and Crashboomlove: A Novel in Verse (1999), which received the Americas Award.

In the line of Walt Whitman, Pablo Neruda, and Allen Ginsberg, Herrera is known for his restless and kaleidoscopic embrace of human experience, his sprawling lines, his riffs and lists and incantatory repetition. Borrowing from both ends of the contemporary spectrum of poetics, he demonstrates an interest in experimental, language-centered texts, as well as a dedication to message, writing passionately about social justice issues. “Many poets since the 1960s have dreamed of a new hybrid art, part oral, part written, part English, part something else: an art grounded in ethnic identity, fueled by collective pride, yet irreducibly individual too,” writes the critic Stephen Burt. “Many poets have tried to create such an art: Herrera is one of the first to succeed.” Herrera’s political activism dates back to his college efforts to bring visibility to Mexican- Americans, and their stories and histories, as a member of the Chicano Civil Rights Movement.

He was educated at UCLA and Stanford University in Social Anthropology, and went on to earn an MFA from the University of Iowa Writers’ Workshop. “I’m a political poet—let us say a human poet,” he has said, “a poet concerned with the plight of people who suffer.” During his two-year tenure as California’s Poet Laureate, Herrera’s projects included an anti-bullying campaign, ‘Answer Cancer with a Poem,’ ‘Show Me Your Papers,’ and “The Most Incredible and Biggest Poem on Unity in the World.’ In addition to poetry, he has published stories, young adult novels, children’s literature, and the nonfiction book Portraits of Hispanic American Heroes, which showcases twenty Hispanic and Latino American men and women who have made outstanding contributions to the arts, politics, science, humanitarianism, and athletics—a magnificent homage to those who have shaped our nation.

Herrera taught Chicano and Latin American Studies at California State University-Fresno and Creative Writing at the University of California-Riverside, as well as in various visiting positions, and he continues his work as a performance artist and activist on behalf of migrant and indigenous communities and at-risk youth.

[Let us Gather in a Flourishing Way]

From HALF OF THE WORLD IN LIGHT: NEW AND SELECTED POEMS (University of Arizona Press, 2008)

I’m writing you on this ocean table/a paragraph between the sand tablets/a
pilgrimage of eyes/from the chasm to the voice/here outside/when
someone screams the branches moisten with gray lips and veils/words fly
up from the beams of shoulders/and bellies like startled gulls/bellies of
prisoner thunder/slave salt/it’s Friday Quentino/your 18 years/beat in the
cell/like littleboyfists/here too there is an iron tuberculosis/the spider’s
smile/daggers springing from the nipples of the administrators/secretaries
naked in a chainlink shorthand/it’s Friday/when the old men are rocking
in big dark armchairs and/now and then look at their trembling hands/the
jawbones groaning in the pasture/and then/your eyebrows remembered/
and your guitarfists that used to play sun and moon when/we asked only
for earth/we’re in June/somewhere between the first and the/thirtieth/
Quentino/an infinite petal between two imaginary padlocks/Quentino/and
the iodine flag in the soldiers’ barracks and the perfume in your hands and
the assemblage of an M-16 stuck in Somoza’s face?/45 years of smoke and
blood exploded in the street/what changes?/Quentino/yesterday your father
died under the insecure hospital makeup/today
I walk the streets/I look for eyes/and look for them/I look when it’s lighter
but the people get used to the eternal/bars/between their eyes and summer

From HALF OF THE WORLD IN LIGHT: NEW AND SELECTED POEMS (University of Arizona Press, 2008)

Mud Drawing #15. Abdullah, the Village Boy with One Eye