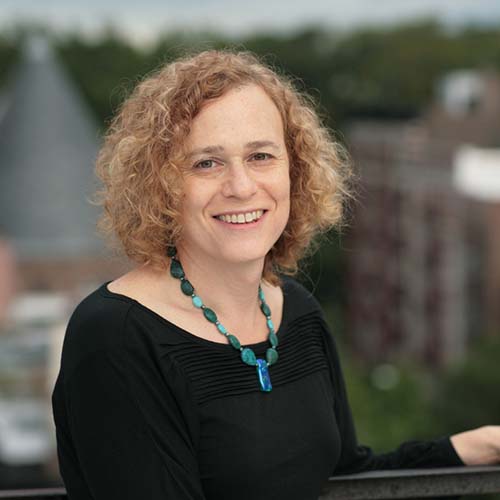 JOY LADIN holds the David and Ruth Gottesman Chair in English at Stern College of Yeshiva University. As the first openly transgender employee of an Orthodox Jewish institution, she approaches the intersection of gender identity and Judaism, gender identity and religious worldviews with a scholar’s erudition and a poet’s sensibility. Ladin’s poems are at once ferocious and tender. They are scholarly, yet extremely approachable, and filled with great humor and heartbreaking sadness.

She has also taught widely: Graduate Program of Creative Writing at Sarah Lawrence, Princeton University, Tel Aviv University, Reed College, and the University of Massachusetts at Amherst. Her work has appeared in many journals, including American Poetry Review, Prairie Schooner, Parnassus: Poetry in Review, Southwest Review, among others. Ladin has authored seven books of poetry: Impersonation(2015), The Definition of Joy (2012), Coming to Life (2010), Psalms (2010), Transmigration (2009), The Book of Anna (2006), and Alternatives to History (2003). She was a Lambda Literary Award finalist, a Forward Fives winner, and was recognized with a Fulbright Scholarship.

Ladin has said that poetry is about creating meaning in a world where meaning is in short supply, where meanings are constantly degenerating into cliché, fashion, empty performance and sarcasm. Her seven books of poems as well as her memoir of gender transition, Through the Door of Life: A Jewish Journey Between Genders, are testament to that desire to make meaning—meaning filtered through and driven by her personal journey of transition. Her works courageously chronicle the excruciating but necessary labor to become an honest self. Writing through thoughts of suicide, illness, loneliness, and despair to arrive at her definition of “joy,” she gives us a portrait of a “soul in and out of flesh, a marriage out of love, and a body from amputation to wholeness.” Stanley Moss has praised Ladin’s The Definition of Joy for its “useful truth.” “She plays profoundly with her name and holy names in the temple and synagogues of her sexuality that is also our doing and undoing. Her world that once was secret and private is our world, far as Uganda, close as a kiss. She sends spies into the Promised Land.” Ladin herself writes that Trans poetics transform self-estrangement into self-discovery, self-discovery into the discovery that there is no self, the impossibility of self into affirmation, exposition, industrial revolution, a massive conspiracy, a door, a window, a wrinkle in time, a sob on tiptoe, a song that is singing us.”

You pull on your body like a favorite leather jacket.
It’s comfortable, broken in or maybe just broken;
you’re lucky that it looks so right
even though it isn’t.

You can’t remember where you got it,
when you started feeling naked
without its butterflies and clicking zippers
and cravings to sing in the dead of night.

Your body is too much fun;
like a dozen apes trying on shoes,
it showers you with love and smoke, poetry
and unburped Tupperware.

Why can’t it hold you quietly, like a shaft of sun
holding a rectangle of butter?
Why do you keep leaving it at parties?
What would you do without it?

You walk slowly through the world
That slowly walks through you.

It isn’t as peaceful as it sounds.
The wars you carry

Into the heart of the world
The world carries

On in yours. The whispering rivers
Of your blood

Are whispered
By the rivers of blood

Spilling over the world
That spills its sunlight into your mouth

Like the golden pulp
Of a golden fruit, licking

The lips you lick, dying to taste
One golden drop

Of the golden fountain
Of the world you walk.

How dramatic you look
In the rich purple shadow
Of your life. You’ve never been

So happy
To be orphaned, blown away
In a storm of rapture

That seems to express
Who you are. Suddenly,
You exist for a purpose.

And still become yourself
Changes the people around you.
Hazy chains

Of flush and decay
Brush the apples
Of your cheeks,

A coy, metallic summer pigment
Shines through the creases
Of your wintry skin. You wish

From a better world, a cool sanctuary
From the pain
That blazes so fiercely right now,

Lighting up the morning
You’ve borrowed from the night.
Pewter, coral, champagne,

Abandoned before breakfast
Or blushing with life,
You are the woman you’ve shadowed,

The home you thought you’d lost,
The cartoon princess who remembers
Thickening into truth, and soon will remember

Being created anew.
From COMING TO LIFE (Sheep Meadow Press, 2010)