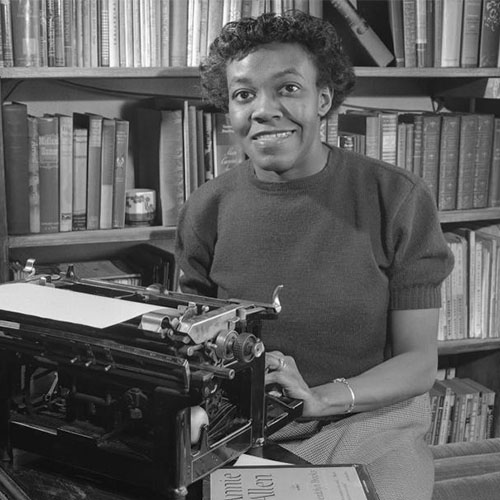 Gwendolyn Brooks has been a leading force in American letters for decades. Her poetry, writes Adrienne Rich, “holds up a mirror to the American experience entire, its dreams, self-delusions and nightmares. Her voice is inimitable.”

Born in Topeka, Kansas, in 1917, she was the first Black writer to win the Pulitzer Prize (1950 for Annie Allen). Author of more than twenty books of poetry and recipient of many honors, including the Frost Medal and the Academy of American Poets’ Fellowship for distinguished poetic achievement, Brooks was writer-in-residence at Chicago State University and from 1968 until her death in 2000 served as the Poet Laureate of Illinois.

From the first it had been like a
Ballad. It had the beat inevitable. It had the blood.
A wildness cut up, and tied in little bunches,
Like the four-line stanzas of the ballads she had never quite
Understood-the ballads they had set her to, in school.

Herself: the milk-white maid, the “maid mild”
Of the ballad. Pursued
By the Dark Villain. Rescued by the Fine Prince.
The Happiness-Ever-After.
That was worth anything.
It was good to be a “maid mild.”
That made the breath go fast.

Her bacon burned. She
Hastened to hide it in the step-on can, and
Drew more strips from the meat case. The eggs and sour-milk biscuits
Did well. She set out a jar
Of her new quince preserve.

…But there was a something about the matter of the Dark Villian.
He should have been older, perhaps.
The hacking down of a villain was more fun to think about
When his menace possessed undisputed breadth, undisputed height,
And a harsh kind of vice.
And best of all, when his history was cluttered
With the bones of many eaten knights and princesses.

The fun was disturbed, then all but nullified
When the Dark Villain was a blackish child
Of fourteen, with eyes still too young to be dirty,
And a mouth too young to have lost every reminder
Of its infant softness.

That boy must have been surprised! For
These were grown-ups. Grown-ups were supposed to be wise.
And the Fine Prince-and that other-so tall, so broad, so
Grown! Perhaps the boy had never guessed
That the trouble with grown-ups was that under the magnificent shell of adulthood, just under,
Waited the baby full of tantrums.
It occurred to her that there may have been something
Ridiculous in the picture of the Fine Prince
Rushing (rich with the breadth and height and
Mature solidness whose lack, in the Dark Villain, was impressing her,
Confronting her more and more as this first day after the trial
And acquittal wore on) rushing
With his heavy companion to hack down (unhorsed)
That little foe.
So much had happened, she could not remember now what that foe had done
Against her, or if anything had been done.
The one thing in the world that she did know and knew
With terrifying clarity was that her composition
Had disintegrated. That, although the pattern prevailed,
The breaks were everywhere. That she could think
Of no thread capable of the necessary
Sew-work.

She made the babies sit in their places at the table.
Then, before calling Him, she hurried
To the mirror with her comb and lipstick. It was necessary
To be more beautiful than ever.
The beautiful wife.
For sometimes she fancied he looked at her as though
Measuring her. As if he considered, Had she been worth It?
Had she been worth the blood, the cramped cries, the little stuttering bravado,
The gradual dulling of those Negro eyes,
The sudden, overwhelming little-boyness in that barn?
Whatever she might feel or half-feel, the lipstick necessity was something apart. He must never conclude
That she had not been worth It.

He sat down, the Fine Prince, and
Began buttering a biscuit. He looked at his hands.
He twisted in his chair, he scratched his nose.
He glanced again, almost secretly, at his hands.
More papers were in from the North, he mumbled. More meddling headlines.
With their pepper-words, “bestiality,” and “barbarism,” and
“Shocking.”
The half-sneers he had mastered for the trial worked across
His sweet and pretty face.

What he’d like to do, he explained, was kill them all.
The time lost. The unwanted fame.
Still, it had been fun to show those intruders
A thing or two. To show that snappy-eyed mother,
That sassy, Northern, brown-black-

“What I want,” the older baby said, “is ‘lasses on my jam.”
Whereupon the younger baby
Picked up the molasses pitcher and threw
The molasses in his brother’s face. Instantly
The Fine Prince leaned across the table and slapped
The small and smiling criminal.
She did not speak. When the Hand
Came down and away, and she could look at her child,
At her baby-child,
She could think only of blood.
Surely her baby’s cheek
Had disappeared, and in its place, surely,
Hung a heaviness, a lengthening red, a red that had no end.
She shook her head. It was not true, of course.
It was not true at all. The
Child’s face was as always, the
Color of the paste in her paste-jar.

She left the table, to the tune of the children’s lamentations, which were shriller
Than ever. She
Looked out of a window. She said not a word. That
Was one of the new Somethings-
The fear,
Tying her as with iron.

Suddenly she felt his hands upon her. He had followed her
To the window. The children were whimpering now.
Such bits of tots. And she, their mother,
Could not protect them. She looked at her shoulders, still
Gripped in the claim of his hands. She tried, but could not resist the idea
That a red ooze was seeping, spreading darkly, thickly, slowly,
Over her white shoulders, her own shoulders,
And over all of Earth and Mars.

He pulled her face around to meet
His, and there it was, close close,
For the first time in all those days and nights.
His mouth, wet and red,
So very, very, very red,
Closed over hers.

Then a sickness heaved within her. The courtroom Coca-Cola,
The courtroom beer and hate and sweat and drone,
Pushed like a wall against her. She wanted to bear it.
But his mouth would not go away and neither would the
Decapitated exclamation points in that Other Woman’s eyes.

She did not scream.
She stood there.
But a hatred for him burst into glorious flower,
And its perfume enclasped them-big,
Bigger than all magnolias.

The last bleak news of the ballad.
The rest of the rugged music.
The last quatrain.

The Children of the Poor

People who have no children can be hard:
Attain a mail of ice and insolence:
Need not pause in the fire, and in no sense
Hesitate in the hurricane to guard.
And when wide world is bitten and bewarred
They perish purely, waving their spirits hence
Without a trace of grace or of offense
To laugh or fail, diffident, wonder-starred.
While through a throttling dark we others hear
The little lifting helplessness, the queer
Whimper-whine; whose unridiculous
Lost softness softly makes a trap for us.
And makes a curse. And makes a sugar of
The malocclusions, the inconditions of love.

What shall I give my children? who are poor,
Who are adjudged the leastwise of the land,
Who are my sweetest lepers, who demand
No velvet and no velvety velour;
But who have begged me for a brisk contour,
Crying that they are quasi, contraband
Because unfinished, graven by a hand
Less than angelic, admirable or sure.
My hand is stuffed with mode, design, device.
But I lack access to my proper stone.
And plentitude of plan shall not suffice
Nor grief nor love shall be enough alone
To ratify my little halves who bear
Across an autumn freezing everywhere.

And shall I prime my children, pray, to pray?
Mites, come invade most frugal vestibules
Spectered with crusts of penitents’ renewals
And all hysterics arrogant for a day.
Instruct yourselves here is no devil to pay.
Children, confine your lights in jellied rules;
Resemble graves; be metaphysical mules;
Learn Lord will not distort nor leave the fray.
Behind the scurryings of your neat motif
I shall wait, if you wish: revise the psalm
If that should frighten you: sew up belief
If that should tear: turn, singularly calm
At forehead and at fingers rather wise,
Holding the bandage ready for your eyes.

First fight. Then fiddle. Ply the slipping string
With feathery sorcery; muzzle the note
With hurting love; the music that they wrote
Bewitch, bewilder. Qualify to sing
Threadwise. Devise no salt, no hempen thing
For the dear instrument to bear. Devote
The bow to silks and honey. Be remote
A while from malice and from murdering.
But first to arms, to armor. Carry hate
In front of you and harmony behind.
Be deaf to music and to beauty blind.
Win war. Rise bloody, maybe not too late
For having first to civilize a space
Wherein to play your violin with grace.

When my dears die, the festival-colored brightness
That is their motion and mild repartee
Enchanted, a macabre mockery
Charming the rainbow radiance into tightness
And into a remarkable politeness
That is not kind and does not want to be,
May not they in the crisp encounter see
Something to recognize and read as rightness?
I say they may, so granitely discreet,
The little crooked questionings inbound,
Concede themselves on most familiar ground,
Cold an old predicament of the breath:
Adroit, the shapely prefaces complete,
Accept the university of death.

Now I am coming home.
This, at least, is Real, and what I know.

It was restful, learning nothing necessary.
School is tiny vacation. At least you can sleep.
At least you can think of love or feeling your boy friend
against you
(which is not free from grief).

But now it’s Real Business.
I am Coming Home.

My mother will be screaming in an almost dirty dress.
The crack is gone. So a Man will be in the house.

I must watch myself.
I must not dare to sleep.