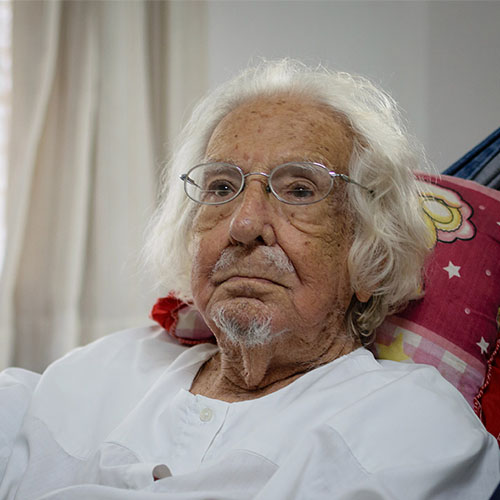 Ernesto Cardenal’s poetry is so deeply engaged with the historical, political, and spiritual landscape of his life that biography and bibliography seem almost arbitrary distinctions. Priest, social activist, and the former Minister of Culture in Sandinista Nicaragua, Cardenal is the most urgent and eloquent voice in a country of poets and revolutionaries, a cultural icon whose life and writings have altered history.

From his years of contemplation at Thomas Merton’s Trappist monastery in Kentucky, to his support for the overthrow of the corrupt Somoza regime in Nicaragua, to his foundation of the liberationist Christian commune Solentiname and the highly successful literacy workshops of the Sandinista years, Cardenal has tied his poetry to his life and brought poetry to the lives of many.

Over the length of his career, Cardenal has produced a kind of poetic history of his homeland, narrating the rise and destruction of successive waves of indigenous and colonial cultures in Latin America and recounting the events of the Sandinista revolution, including a fierce yet astonishingly generous critique of U.S. foreign policy. Allen Ginsberg has said of his epic poem The Cosmic Canticle, Cardenal “interweaves brilliant political-economic chronicle with panoramic spiritual information, updating post-Poundian verse for [a] late 20th century narration of the Americas’ last half-millennium.” Myth mixes with pop culture, an unceasing belief in the Divine with a profound concern for the material world to form a “textural collage” – in Neruda’s terms, “an impure poetry” that is as often unsettling as it is beautiful, and is made with the common materials of everyday experience. Poetry, politics and prayer join in Cardenal’s work; it speaks a truth that he himself embodies, rendering its voice and its message inseparable.

Questions by the Lake

When, after two years you returned to Solentiname,
pppppp already a child of five, Juan,
I remember very well what you said to me:
“You’re the one who’s going to tell me all about God, right?”

And I who all the time
have come to know less about God.
A mystic, that is, a lover of God
called God NOTHING,

and another said: all that you say about God is false.
And if you were to have knowledge of God it was better
perhaps I didn’t talk to you of God.

But once,
I certainly spoke to you of God by the lake,
on the dock,
during a twilight all pink and silver:

“And within that other heron?” “Yes.”
A tiny Adam naming all your small paradise.
“And God is within this dock?” “Yes.” “And within the waves?”
Why do children ask so many questions?

And I
why do I question why
like a child?
“And God is also within my dad and my mom?” “Yes, God is.”

And you told me:
“But God doesn’t get to the island of the bad ones, right?”

Now, 12 years old,
you’re in the Association of Sandinista Children.
You go to the rallies. You take part in voluntary work.
You take watch turns for the revolution. You’re in the militia.
(Now the bad ones have left their island.)

“And God is also within the little stars
the tiny little stars that are so big, right?”
The numbers measuring littleness
are as large as those for bigness.

Where did you come from?
And I was shocked, not only by your questions
but also because I thought that
of three hundred million spermatazoids

And like you
three hundred million asked me from their nonexistence
where is God,
telling me I should tell them all about God,

and if God is also within them?
(And with them the whole infinity of nonexistents
infinitely greater than the existent.)
As if all at once I were interrogated
by three hundred million stars that didn’t exist.

Although among all those millions,
within which God also is,
you were the only one, Juan,
the one who questioned me that day by the lake.
The one who one day believed that I would tell him all about God.

Translated from the Spanish by Marc Zimmerman From FLIGHTS OF VICTORY (Orbis, 1985)

I’m surprised that I now read
with great interest

a 13.6% jump in sugar is expected
corn production dropped 5.9%
gold dropped 10% because

of attacks by the contras in that region
likewise, the shellfish . . .

When did these facts ever interest me before?
It’s because now our wealth,
meager as it may be,
is intended
for everyone.
This interest of mine
is for the people, well,
out of love
for the people. The thing is
now these numbers amount to love.

The gold coming out of the earth, solid sun
cut into blocks, will become electric light,
drinking water
for the poor. The translucent

mollusks, recalling to mind women, the smell of a woman
coming out of the sea, from their underwater caves
and colorful coral gardens, in order to become
pills, school desks.

The holiness of matter.
Momma, you know the value of a glass of milk.
The cotton, soft bit of clouds,
– we’ve gone to pick cotton singing
we’ve held clouds in our fingers –
will become tin roofs, highways, and

the thing is now what’s economic is poetic,
or rather, with the Revolution
the economy amounts to love.

Translated from the Spanish by Jonathan Cohen From FROM NICARAGUA WITH LOVE (City Lights, 1986)

Excerpt from CANTIGA 2: The Word

In the beginning
-before spacetime-
was the Word
All that is then is true.

Poem.
Things exist in the form of word.
All was night, etc.
There was no sun, nor moon, nor people, nor animals, nor plants.
The word was. (Amorous word.)

he created the words (naikino)
and gave them to us, just like the yucca”
in that anonymous yellowing translation from the German
of a part of that massive book by Presuss
which I came across in Bogota’s Museum of Ethnography
Spanish translation of Presuss translating from Witoto into German:

The word in their songs, which he gave them, they say,
is the same with which he made the rain
(he made it rain with his word and a drum),
the dead go to a region where “they speak words well”

downriver: the river is very big,
(what they’ve heard of the Amazon according to Presuss)
there they haven’t died again
and they are well downriver without dying.

The day will come when we will head downriver ourselves.
In the beginning then was the word.
The one that is and communicates what it is.

That is:
the one that totally expresses itself.
Secret that surrenders itself. A yes.
He in himself is a yes.

At the beginning . . .
Before spacetime,

When all was night, when
all beings were still obscure, before being beings,
a voice existed, a clear word,
pppppppppp a song in the night.
In the beginning was the Song.
pppppp Singing he created the cosmos.
And for that reason all things sing.
They don’t dance except through words (through which the
world was
created)

We are word
in a world born of the word
and which exists only as something spoken.
The firmament announces it as with neon letters.
Each night swapping secrets with another night.
People are words.
And thus one is not if one is not dialogue.
And so then each one is two
or is not.

Each person is for another person.
I am not I rather you are I!
One is the I of a you
or one is nothing.

I am nothing more than you otherwise if not I am not!
I am yes. I am Yes to a you, to a you for me,
to a you for me.
People are dialogue, I say,
if not their words would touch nothing
like waves in the cosmos picked up by no radio,
like messages to uninhabited planets,
or a bellowing in the lunar void
or a telephone call to an empty house.

Translated from the Spanish by John Lyons