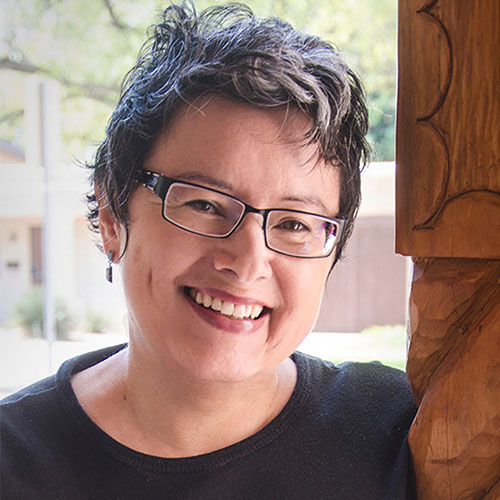 Dedicated to illuminating both our private lives and our public personalities, Demetria Martinez is both a poet and an activist. Jimmy Santiago Baca calls her latest collection, The Devil’s Workshop, “A tough and solitary celebration of the song [by] . . . a solid and unflinching voice in Latina poetry.”

Born in Albuquerque and raised by her Mexican grandmother, Martinez’s poems gracefully and powerfully interweave religion, gender, and ethnicity while probing the intimate interior of the human heart. By turns sensual, political, and outraged, she writes from a conviction that transformation—of the world and of the self—is always possible. Martinez reminds us, notes the Bloomsbury Review, “that the most important political work begins and ends in the human heart.”

A committed social activist, Martinez has been on the forefront of the sanctuary movement. In 1988, when she was indicted on charges related to smuggling two refugee women into the country, federal prosecutors attempted to use one of her poems, “Nativity, for Two Salvadoran Women”, to convict her. In a landmark decision, she was acquitted on First Amendment grounds. Her first novel, Mother Tongue, which won the 1994 Western States Book Award, was loosely based on her involvement with the sanctuary movement.

A graduate of Princeton University, Martinez is a columnist for the National Catholic Reporter. She is involved with immigrants’ rights issues along the U.S.-Mexico border and teaches workshops on writing for social change. Her essay collection, Confessions of a Berlitz Tape Chicana, is slated for a spring 2005 release. She lives in Albuquerque.

Mystical?
Too clinical.
God?
The name has been
smoked down
to a stub.

For sixteen years
I have ransacked
the universe,
unsealing files,
lifting lyrics,
looking for a way
to say how it was.

Because we have
no word for light
we live in shadows.

From BREATHING BETWEEN THE LINES (University of Arizona Press, 1997)

Do you know who I am? If I fell to pieces could you
Reassemble the jigsaw? Do you know where it all
Goes: Grandma’s prayer book, my cassette tape
Of Taos drummers, the postcard from El Salvador?

You-who’ve never even asked about my book
Of matches, to light the light I’ve carried
Through a hundred tunnels because
The light at the end is never enough.

The night is a boarded-up city of nameless streets.
Winds hiss through the slit tire of a star
While that other woman named Sleep
Holds you as I look on until morning.

From THE DEVIL’S WORKSHOP (University of Arizona Press, 1997)

Damn the brain’s chemical spills, evacuating
Every thought. Damn the smiles I pinned
To my face like a politician, a face
Like coffee with too much cream
Because I could not draw the
Curtain strings, raise the
Flag of a new day.
Cry, too, for the lost nights,
The poems, aborted, because I locked
The canvas of my heart in a man’s closet
And talked my way into his bed.

I was nineteen when I saw the light
Of God escape like steam
From every living thing.
Now doctors say it was just
A tap dance of neurotransmitters.
But I know what I saw and what I heart:
How His heart pumped inside the heart
Of the Sandia Mountains like an accordion.

God, you alone know I took notes;
You alone know I wrote pages
And pages of psalms,
Then lost them on the road
Down a red-ribbed mesa north of Albuquerque.

Twenty years later I am rewriting them.
Remembering, dismembering.

God, will You forgive me
If I call them
Poems?

From THE DEVIL’S WORKSHOP (University of Arizona Press, 2002)