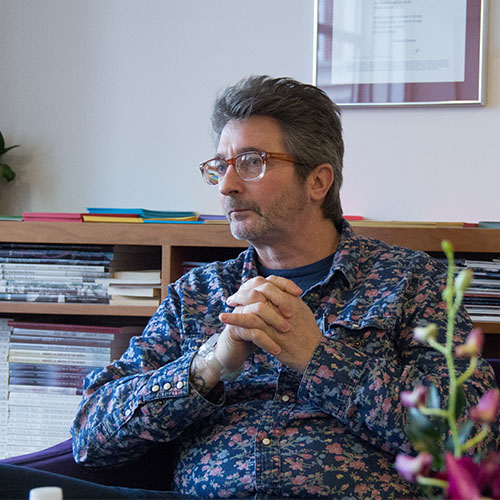 An inventive and vital voice in American letters, Dean Young first fell in love with poetry during his childhood in Pennsylvania, when in the third grade he “started writing and never stopped.” After earning his MFA from Indiana University, Young went on to garner much recognition, receiving the Academy Award in Literature as well as a Stegner fellowships from the Stanford University. By now, he has published twelve books of poetry, most recently Fall Higher and Bender: New & Selected Poems, a vibrant distillation of a truly remarkable body of work. And received a slew prestigious accolades, including fellowships from the Guggenheim Foundation and the National Endowment for the Arts, and a Pulitzer Prize nomination. Young has taught at the Warren Wilson MFA Program and was on the permanent faculty of the University of Iowa MFA, until 2008 when he became the William Livingston Professor of Poetry at the University of Texas. After years of teaching poetry, he wrote The Art of Recklessness: Poetry as an Assertive Force and Contradiction (2010), which he calls an “an amalgam of crticism and manifesto and pedagogy.”

Young’s poetry is nothing if not a marvelous conundrum. He has said that “to tie too close to meaning misses the point,” and to read a poem by Dean Young is to overhear snippets of a playful and bizarre conversation at once implausible and undeniably true. His audacious leaps and juxtapositions and his extravagant imagry allow the reader to admire the truth in disconnected moments; to inhabit the world that exists between eye blinks. “If adventurous poetry can sometimes feel like a tenuous tightrope walk,” wrote The Boston Globe, “Young’s poems feel more like zip lines.” Young has said that “poetry atrophies when it strays too far from the human pang,” that the poet should attend to beauty of life’s confusion, the connections that arise from disconnection itself. His work constantly reminds us that human experience is absurd, and that comedy and tragedy sometimes live in the same moment.

Over a decade ago, Young was diagnosed with congestive heart failure, and by 2010 his heart was pumping at only 8% of capacity. His prospects looked very grim as his name sat on the list for a heart transplant. During the year of waiting, he wrote Fall Higher. This volume, as well as the rest of his poetry, is infused both with the awareness of mortality. To Young, the “signature characteristic” of poetry is the line, which, by nature, must end, as we do. But, as he says, “The human condition is pretty funny, tragic as it is. There’s nothing funnier than being in a cardiologist’s waiting room. It’s hilarious.”‘ In 2012, Young finally received the news he was hoping for, and a healthy heart. Re-invigorated by this second chance, there is no doubt that he will continue to remind us that art must never be less explosive than life itself.

It’s not that Monet cared that much about stacks of hay.
Your feelings will never change, you’ll just stop paying so much attention.
A whole summer’s songs go by, the whole house turns blue.
A friend will need some help carrying boxes to the curb.
So, slowly you’ll reach into the pond’s reflection of your own face- as if reaching into your
face!-the tiny fishes will brush your fingers like nerves made of water.
Someone else will have to be young enough to climb the scaffolding around the town hall
to derange all four of its clock faces.
The same laughter will have to work the rest of your life.
A friend takes your arm in the woods, it’s darker turning back.
You point at an opal in a glass case and the person behind it is only
too glad to let you see it against your skin but it’s someone else’s skin you want.
You didn’t get everything but you got a lot.

In one story, the coyote sings us into being.
The self is either a single arrow-shot
into the sun or a long, squiggly thing
wet at one end. If someone were
to rip the roof off and look down on us,
we’d look like lice on a tribal mask.
Now Lorca, there was a poet. The disordered
strength of the curved water, he wrote
shortly before he was shot in the head.
Maybe distorted. We know he held hands
with a schoolteacher, also shot, and how
the last hour he was sure he’d be shot
and sure he’d be released. At the last moment,
Van Gogh slashed crows across the wheat field.
Winter is scary enough but to follow it with spring. . .
God must be demented, he must spend a lot of time
out in the cosmic downpour. I mean what
would you do if you had to create Beauty?
I’m afraid I’d start screaming, the most irksome
forms of insects coming from my mouth. I’m afraid
I’d come up with Death. On my desk
is a paperweight, a copse of glass flowers inside.
The last few months my father amassed a collection
of paperweights. He knew he was going to disappear.
Finally my mother said, Take a couple.
I don’t think I have the proper papers to weight.
The other is a pewter frog.
It was May, I was 19, writing
a paper on Hamlet for a professor who’d hang himself.
I remember the funeral director asking
my sister and me if we wanted to see my father
one last time. I thought for a moment
it was a serious offer. But he was talking about
a corpse. A corpse in makeup. But this year,
I will get it right, I will stare at a single branch
for all of May. I will know what it’s going through
at least on the fructifying surface. In May
he bought a yellow suit he wore just once.
In May I will listen to the bark whimper and split,
the blossoms blink from sleep. I will
haunt the town I’ve haunted for years,
turning the corner of Sixth and
Grant, seeing myself just ahead
in that ratty jean jacket, sleeve ripped
to fit over the cast. A few pains remain,
become formalized, enacted in dance
but I’m careful not to catch myself. He might
want to get me high in the middle of the day.
I might have work to do, I might be going to the ash
I planted over my dead cat years back
behind the garden where Nancy lost the ring
my father made from a quarter during the war.
She will be sobbing, digging among the infant tomatoes.
It’s okay, I will say, and she will nod and vanish.
It’s all right, I will say and my cat will cease
mewing beneath the earth.

I was satisfied with haiku until I met you,
jar of octopus, cuckoo’s cry, 5-7-5,
but now I want a Russian novel,
a 50-page description of you sleeping,
another 75 of what you think staring out
a window. I don’t care about the plot
although I suppose there will have to be one,
the usual separation of the lovers, turbulent
seas, danger of decommission in spite
of constant war, time in gulps and glitches
passing, squibs of threnody, a fallen nest,
speckled eggs somehow uncrushed, the sled
outracing the wolves on the steppes, the huge
glittering ball where all that matters
is a kiss at the end of a dark hall.
At dawn the officers ride back to the garrison,
one without a glove, the entire last chapter
about a necklace that couldn’t be worn
inherited by a great-niece
along with the love letters bound in silk.

Available as a Broadside