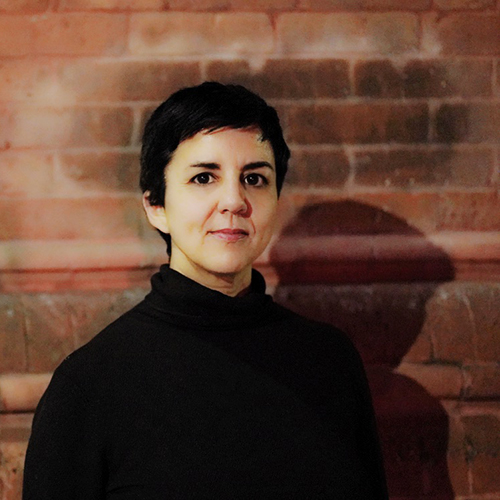 The timely, searing poems of Carmen Giménez Smith insist on confronting America’s xenophobia and systemic racism. Describing Giménez Smith’s most recent collection, Be Recorder (Graywolf, 2019), the National Book Awards committee praised the ways in which her poetry “turns the increasingly pressing urge to cry out into a dream of rebellion—against compromise, against inertia, against self-delusion, and against the ways the media dream up our complacency in an America that depends on it.” Giménez Smith is the author of five additional collections of poetry, including Milk and Filth, which was a finalist for the 2013 National Book Critics Circle Award for Poetry, and celebrated by Publishers Weekly for the way that its images “challenge classist, consumerist, and socially polite forms of feminism." Giménez Smith teaches English at Virginia Tech. She also co-directs CantoMundo, serves as publisher of Noemi Press, and is poetry editor (alongside Stephanie Burt) for The Nation.

Carmen Giménez Smith will join us for a reading on Zoom on November 17, 2020 at 7:30 p.m. EST. The event is free and open to the public, but registration is required.

[I'd once have left]

—excerpt of "Be Recorder"

[I was light from the mouth from every part of me]

—excerpt of "Be Recorder"

I would love to make a proposal, and it is out of love,
not patronizing love but true revolutionary love, and it won’t
upset the orbit tomorrow. So here’s where I’d like
to begin, and this might be the hardest thing you’ve tried to do,
or maybe you already do it and I’m grateful for you
because you’ve inspired me. I know it’s the hardest thing
for me because I haven’t done it consistently (not at all, sorry),
but I want to recommend that we stop apologizing.
Today I counted and I said I’m sorry approximately 22 times.
I apologized for my setting my stuff down on the counter at Kroger.
I apologized for being behind someone at a copy machine.
I apologized for someone else bumping into a stranger.
I apologized for taking longer than a minute to explain an idea.
Suffice it to say I am sorry all the time.
I won’t tell you what to do because that makes me
an implicit solicitor of sorry. Personally,
when the word comes into my mouth, I’m going to shape it into
a seed to plant in another woman’s aura as love. I only ask
that we get started. This is our first step toward world domination.