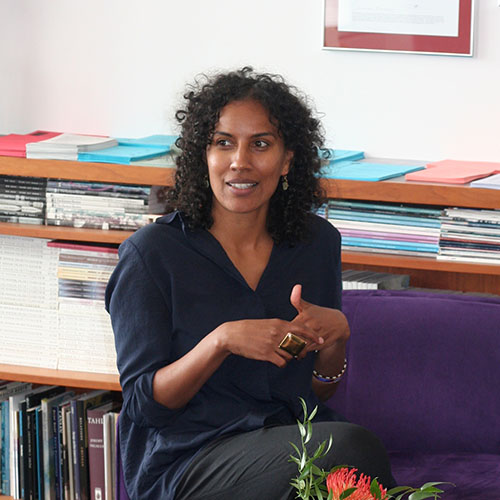 Described as “the real deal” by the Co-editor of Latino Boom, Aracelis Girmay is a powerful, inventive poet, writer, and educator who is not afraid to take on any subject, including rape and genocide, and who brings to her poems not only high seriousness and passion but a sustaining voice of hope. Introducing her debut collection, Teeth, Martín Espada writes that her work is “so strong, so brave, so lyrical, so fiery, so joyful, that the usual superlatives fail.”

Girmay weaves her multicultural heritage (Eritrean, Puerto Rican and African American) into a distinct political voice. From the African folk tale to the open-air markets of Puerto Rico, Girmay recovers the images of her mother countries, merging the traditions – culinary, spiritual, storytelling – into a poetry of resistance and survival. Drawing in stories from Iraq, Darfur and Nicaragua, she takes a stance of “solidarity with people whose history changes, or is forcibly changed by war, poverty and the damaging actions or apathy of the world’s leaders,” writes Rigoberto Gonzalez in a review of Teeth.

Also a writer of fiction and nonfiction, Girmay received her MFA from New York University and works as a writer in the schools with the Community Word Project and Teachers & Writers Collaborative. She is a Cave Canem Fellow and has published poems in Ploughshares, Callaloo and the Indiana Review among other journals, citing among her deep influences Frieda Kahlo, Martín Espada, Toni Morrison, Minnie Ripperton, Walt Whitman, Ralph Ellison, Pablo Neruda and Gwendolyn Brooks.

for cousin Gedion, who drove us to Massawa

Two sisters ride down with us.
It is liberation day in Massawa.

The older sister is the color of injera; her teeth are big
& stuck out.
The younger sister is a cinnamon stick.

Their almond eyes are the same.
Ink black hair falls beautiful down both their backs.

I see that you love one of them & change my mind
many times about who I think it is.

Months later, I will show their photographs to my father
who will laugh & say he knows.

“It is this one,” he will say, surely, pointing
to the woman whose teeth stay, tame, in her mouth.

But what man would choose a woman
whose mouth looks stronger than his hands?

Know, Cousin, I pray there is love
between you & the older one
whose teeth might be bullets of ivory;

I imagine from this mouth:
kites,
rain,
ax equal to lace, the yellow & lick
of a jar filled with
the sweet of stinging bees.

No, child, not rain.
It was not rain fallen down
to make the mind go flying quick,
away, above the fields, to turn
the bodies of the people into ramshackle yards,
depositories of poison dressed as clouds. Say,
It was not the fault of sky.
It was not the plan of the weather.
The poison caught fire in Belarus. &, child,
I cannot forget your eyes,
how they sit like two grey stones
or ringed steel in the hollows of your face.
& your brain ballooning out
from its eggshell skull.
& your young boy legs
swelled large as legs of horses. Still,
you cannot walk, even when the heart sings, “Walk!”
Even when the heart sings, “Get up
from there.” Instead, the days push through you
like an oxygen tube
whose air blindly fumbles
through your body of arms
until deep in the bulrush
of your bones & curtains,
the heart shuts its red, fat eye,
& sends what’s left of you out: gentle-like
& finished into world.

Consider the Hands That Write This Letter

Consider the hands
that write this letter.
Left palm pressed flat against the paper,
as we have done before, over my heart,
in peace or reverence to the sea,
some beautiful thing
I saw once, felt once: snow falling
like rice flung from the giants’ wedding,
or strangest of strange birds. & consider, then,
the right hand, & how it is a fist,
within which a sharpened utensil,
similar to the way I’ve held a spade,
the horse’s reins, loping, the very fists
I’ve seen from roads through Limay & Estelí.
For years I have come to sit this way:
one hand open, one hand closed,
like a farmer who puts down seeds & gathers up;
food will come from that farming.
Or, yes, it is like the way I’ve danced
with my left hand opened around a shoulder,
my right hand closed inside
of another hand. & how I pray,
I pray for this to be my way: sweet
work alluded to in the body’s position to its paper:
left hand, right hand
like an open eye, an eye closed:
one hand flat against the trapdoor,
the other hand knocking, knocking.