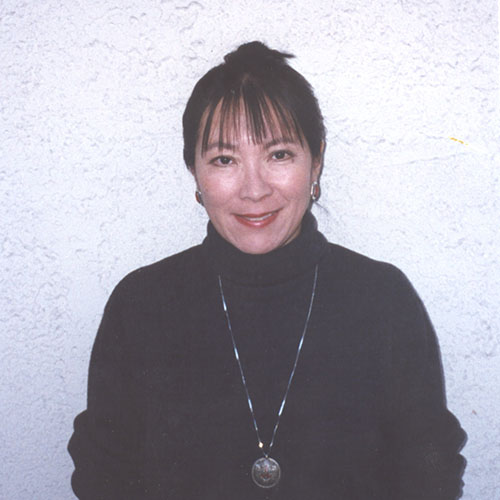 Menu
The daughter of Japanese American parents who were unjustly interned during World War II, Amy Uyematsu considers herself “a true child of the anti-war, black power sixties, . . . when poetry seemed to be a natural by-product of those turbulent times. One of the founding lights of the Asian American Movement, she edited Roots: An Asian American Reader in 1971, and writes from the perspective of “a curious, sometimes furious yellow,” as one of her poems puts it. Her poems draw from her personal experience as a third-generation Japanese American woman, activist, and high-school math teacher. Uyematsu’s books include Stone Bow Prayer (2005), Nights of Fire, Nights of Rain (1997), 30 Miles from J-Town (1992), which won the Nicholas Roerich Poetry Prize, and The Yellow Door, recently released and praised by Marilyn Chin as “mature and ambitious” and “thoroughly compelling.” Naomi Hirahara described the book as “an exuberant and heartfelt dialogue between [Uyematsu’s] past and present,” and pronounced it “a pitch-perfect collection by one of LA’s finest poets.”

after Jack Micheline’s “Poem”
(“I chose the whippoorwill”)

I chose Cisco Kid, Tonto, and men dressed in black.
I cheered the loudest when the Indians attacked.
I chose loners, despising cliques at every age
but secretly hoping one day I’d get picked.

I chose revolution, not evolution.
I carried the Red Book, Soul on Ice, quoted from
Paolo Freire’s Pedagogy of the Oppressed.
I knew the meaning of dialectal materialism.
Once I held my husband hostage for having no opinion.
Once a lover who wronged me said I take no prisoners.
I took sides like a junkie until I could see
they both cared about winning no matter the cost,
and when i chose to give up the battle,
a voice inside was still calling my name.

I always chose the romantic ending,
listened to torch songs long before
I’d ever died of longing.
I took my cues from the moon.
I chose saxophone and cha-cha, sipped Scotch
on the rocks, lounged
in the shade of June afternoons
slowly chewing the skin of a Japanese plum.
I chose purple for my bridesmaids
when the custom was pastel.
I wanted the alchemy of two hearts
but kept ending up with just one.

I chose “That’s not fair” as my stubborn refrain.
The sky would rise bluer than gorgeous,
just to jeer me on.

I chose the wisdom of woman,
Mom over Dad even when she hurt him,
all the mothers of soldiers who never come back,
and the grandma who made my favorite rice balls
though she forgot to add wine to sweeten the vinegar.
How much I’ve relied on the kindred blessings
of goddess, witch, and crone.

I chose stones over grass, fish over bear.
Trusted hands that can make things grow
from cotton, clay and seed.
I chose poetry because she spoke to me
so lovingly, the way my whole world
quieted to hear.

I can’t explain how a stone feeds
the tongue that grows wild at the root,
or this history fused to the stone’s ancient skin.
Coming from the same ocean mountain
which once burned red, stone is
this island grown lush
with the things left unsaid.

The goldfinch in its full spring molt.
The bee pollen of sticky and thick.
The quince to perfume a new bride’s kiss.
The ocher yellow in Vermeer’s pearl-necklaced woman.
The opal cream floral on a kimonoed sleeve.
The zest yellow of a Nike Quickstrike in limited numbers.
The imperial yellow embroided robes.
The Aztec gold send by Cortés to Spain.
The Zinnia gold favored by butterflies.
The iguana who keeps watch on Mayan ruins.
The straw hat a cone woven with young bamboo.
The rising sun of Japan’s Amaterasu leaving her cave.
The sand dune that swallows the film’s lovers but keeps them alive.
The coastlight of sun lost in fog.
The chilled lemonade from the fruit of bitterness.
The Manila tint to sunny the laundry room.
The blond and boring heartthrob.
The yellow flash before the grin gets too tight.
The lemon tart with a mouth to match.
The star fruit which can mean two-faced in Tagalog.
The fool’s gold of sojourners and farmers.
The golden promise that still lures us here.
The sunshower which turns my tawny skin brown.
The banana split of Asian outside white underneath.
The Chinese mustard stirred with a dribble of soy sauce.
The yellowtail tuna father cleaned and sliced thin.
The yolk we ate raw with sukiyaki and rice.
The pear ice cream we licked that Tohoku summer.
The moonscape suffusing a rice paper screen.
The theater lights which make the audience vanish.
The electric yellow called Lake Malawi’s yellow prince.
The daffodil that doesn’t match these mean streets.
The marigold for night sweats and contusions.
The summer haze which splits open the sky.
The slicker yellow bands on those 9/11 jackets.
The dandelion that bursts through sidewalks.
The blazing star we still can’t see rushing toward us.
The yellow rose legend of a Texas slave woman.
The atomic tangerine of Los Alamos, New Mexico.
The Jasper yellow of gemstone and James Byrd.
The flame yellow as bone turns to ash.
The wick moving in time with my measured breath.
The first light an eye latches on to.
The whisper yellow as a pale strand of moon.
The yellow lotus that’s nourished by mud.
The poppy spring returns to the Antelope Valley.
The wonderstruck even in those old eyes.
The Chinese lantern riding a night sky.
The sparkler a child waves in the dark.