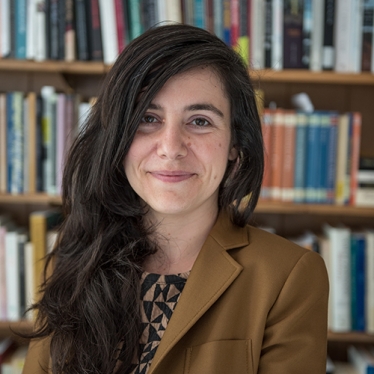 Lily Gurton-Wachter received her bachelor’s in literature from Bard College and her doctorate in comparative literature from the University of California, Berkeley. Her dissertation was awarded the American Comparative Literature Association’s Charles Bernheimer Prize for the best dissertation in the field of comparative literature for 2011. Her teaching and research focus on Romanticism, comparative poetics, the history of feeling and the shifting relation between literature and politics, history and ethics. In addition to teaching a variety of Romantic-era authors and texts—including courses on Austen, Blake, Frankenstein: The Making of a Monster, Romanticism and Feeling, The Literature of Resistance and Social Justice, and The Pleasures of Not Thinking: Romanticism and the Irrational—she teaches Violence, Trauma, Memory: Literature and War, The Lives of Animals: Literature and the Nonhuman, Environmental Poetry and Ecological Thought and Literature and Waste. Before joining the Smith English department, she taught at Bard College, the Prison University Project at San Quentin Prison, the University of California, Berkeley, and the University of Missouri.

Gurton-Wachter’s first book, Watchwords: Romanticism and the Poetics of Attention, argues that the concept of attention became particularly unhinged at the turn of the 19th century in Britain, oscillating between disciplines—from theology to pedagogy, from philosophy to science, and, most forcefully, from poetics to the rhetoric and practices of war. Through close readings of poetry by Blake, Coleridge, Cowper, Keats, Charlotte Smith and Wordsworth, Watchwords uncovers a strain of poetics especially concerned with the militarization of attention, a poetics that defines itself and its reader’s attention as a resistance to, and reconfiguration of, wartime vigilance. This new framework for interpreting Romanticism reveals what turns out to be an ongoing tradition of war literature that, rather than giving testimony or representing warfare, uses rhythm and verse to experiment with how and what we attend to during war.

Gurton-Wachter has essays published and forthcoming about violence and communal shame in Anna Barbauld, Charlotte Smith and Percy Shelley; William Blake and wartime shame in “London” and Jerusalem; and injury, race, and the politics of happiness in Blake’s “The Chimney Sweeper” and beyond (texts by Langston Hughes and Jamel Brinkley). She is currently working on a new book project tentatively titled Poetry and Complicity in an Age of National Sins.

Watchwords: Romanticism and the Poetics of Attention. Stanford University Press, 2016.

“’Ever on the Watch’: Wordsworth’s Attention.” Studies in Romanticism. Winter 2013. “‘An Enemy, I suppose, that Nature Has Made’: Charlotte Smith and the Natural Enemy.” European Romantic Review. Spring 2009.