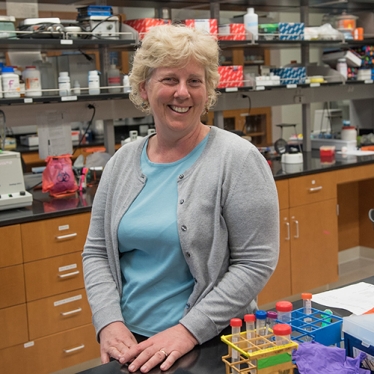 White-Ziegler uses molecular biology tools to investigate how environmental cues are sensed and used by Escherichia coli to regulate gene expression. Elaborate sensory mechanisms have evolved in order for these microorganisms to detect environmental changes and thereby regulate cellular activities to adapt to their changing surroundings. This is particularly evident among bacterial pathogens where expression of virulence factors is highly regulated in response to their immediate environment. Pathogenic bacteria frequently use environmental cues to discern between host and non-host environments, and subsequent regulation of virulence gene expression can allow for a more efficient utilization of bacterial resources and facilitate colonization, leading to infection. Recent results from her laboratory indicate that commensal bacteria, important for human immune system development, protection against foreign pathogens and nutrient acquisition, also use these cues for gene regulation. The White-Ziegler laboratory considers how genes with increased expression at human body temperature (37 degrees Celsius) relate to adaptation to and colonization of the host, but they have also recently completed work on how ambient temperature (23 degrees Celsius) directs a set of separate genes for acclimatization in biomedically relevant external settings.

Studies like these help to advance the goals of developing better treatments and novel medicines for infectious disease. A new strategy within microbiology is the design and development of "anti-infectives," drugs that target proteins that are expressed and facilitate colonization of the host (e.g. adhesins, toxins, iron acquisition genes). Often, the targets of these drugs are not the structural proteins themselves, but rather the regulatory proteins that direct their transcription. The concept is that by preventing the transcription of these genes, the organism is attenuated and cannot effectively colonize the host, resulting in the clearance of the microbe with significantly less selection pressure than current antibiotics. Thus, studies of the cues and proteins that drive transcription of these E. coli genes promotes this broader goal.