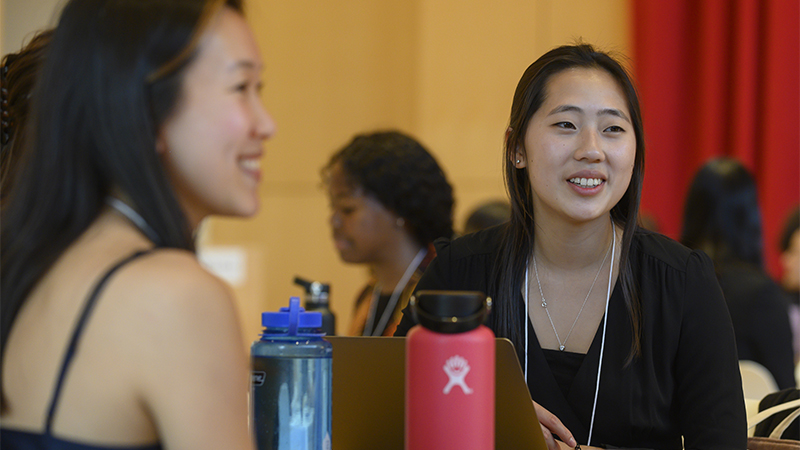 The Conway Center offers a slate of programs and activities focused on creative thinking, problem solving and interdisciplinary teamwork, as well as the development of personal finance and business leadership skills.
On This Page
Back
to Top

Unlock your creativity while building your problem-solving skills. This hands-on series will help you learn to recognize opportunities presented by the problems around you, how to rapidly generate and test possible solutions, and assess the value your solution may have to others. *Space is limited; dinner provided.

Established through the thoughtful generosity of Elizabeth Miller ’81, this lecture series brings emerging leaders from the nonprofit and business sectors to campus to inspire and educate current Smith students. Invited speakers are leaders who can articulate why and how taking an income risk is important as they strive to create change.

2021: Seed, Weed, Bloom: Cultivating a Wild and Precious Life
Simran Sethi ’92, an independent writer and scholar and 2009 recipient of the Smith College Medal, will talk about her commitment to unearthing difficult stories while nurturing a taproot of joy and possibility.

2019: From the Graveyard Shift at Alamo-Rent-A-Car to the White House
Anne Lewis ’82 served as a special assistant to President Clinton on the National Economic Council and was twice confirmed as an assistant secretary of labor. In 2007, she founded Anne Lewis Strategies LLC which she has grown into the premier digital marketing agency for progressive nonprofits and Democractic presidential candidates. The company was acquired by Infogroup LLC in 2017; Anne continues to serve as its president.

2018: Moxie, Fear, Fun and Face-Plants in a Life of Change
Busy Burr ’83 started her career in a very traditional way: investment banking, Stanford Business School and back to investment banking. Advice from her father and (soon-to-be) wife gave her the courage to leave a lucrative investment banking career and leap into the unknown. Busy will talk about how curating experiences through trial and error and uncertainty, crises in confidence, improvisation and joy have played a role in her varied life.

2017: Dedication of the Jill Ker Conway Innovation Center and Elizabeth Miller ’81 Lecture
Diane Hessan is a successful entrepreneur, researcher and author. She is the founder and chairman of CSpace, which for the last decade has been one of the hottest companies in Boston’s innovation economy.

2016: Redefining Success - Smith College Women's Leadership Conference
Caroline Clark ’85 is an award-winning journalist whose experience spans print, digital and television outlets. In her 19 years at Black Enterprise, she has served in a number of senior leadership and editorial roles, and as editorial director of the Black Enterprise Women of Power Summit, she determines the editorial direction and theme of the nation’s largest annual conference targeting African American women executives. She is the author of Take a Lesson: Today’s Black Achievers on How They Made It, What They Learned Along the Way, and Postcards From Cookie: A Memoir of Motherhood, Miracles, and a Whole Lot of Mail.

2013: Risk Taking and Its Rewards - A conversation on leadership and entrepreneurship
Jeannie Cho Lee ’90 and Annie Morita ’90 talk about their choices and challenges since leaving Smith. Annie Morita is chief of staff at Oriental DreamWorks Film & Television in Shanghai, China. Jeannie Cho Lee is founder of asianpalate.com, a site that aims to lead intelligent and insightful discussions about food and wine in Asia.

2012: Risk Taking and its Rewards
Megan Gardner ’98 is the chief executive officer of Plum District overseeing all areas of the business including sales, marketing, operations, technology and business development. Megan launched her career on Wall Street as an investment banker for Deutsche Bank and Soundview Technology, primarily focusing on technology clients. Dr. Katrina Gardner hails from the Badlands of North Dakota and comes to medicine after being a primary school teacher in Nepal for five years. She attended the University of North Dakota School of Medicine and now plans to practice full-spectrum rural family medicine with an emphasis on obstetrics. She and her husband are excited to be completing the remainder of her residency while living in Colville as part of the Rural Track Training Program.