Ng’endo Mwangi ’61 during her days as a student at Smith. Smith College Special Collections, College Archives.

Some years later, when Wambui Mwangi was a student at Smith, the center became a hub for campus activism around issues of race and diversity.

This week, the college will host a celebration of the Mwangi Cultural Center, which has long been and still is an an important focus of student engagement at Smith. The rededication event, to be held at noon on Friday, April 6, will spotlight the center’s 45-year history on campus, as well as recent building renovations that have made it a larger, more welcoming space.

On Thursday April 5, at 5 p.m., the center will unveil, “Walking in Their Footsteps—People of Color at Smith,” a display of photos and documents from the College Archives exploring the dynamic stories of students of color who have created a legacy at Smith and in the world.

In an interview in advance of the celebrations, Wambui Mwangi talked about the center that is a key part of her family’s legacy at Smith.

What led you to attend Smith?

“I heard about Smith from my mother, who always wanted me to go there. When I was growing up in Nairobi, a number of my mother’s friends and a few of her professors from Smith came to visit her. She kept in contact with many of her non-Smith Northampton friends as well, and I would get letters from them. I suffered less culture shock when I entered Smith because those relationships created and nurtured a feeling of connection to the college long before I arrived in Northampton.”

What role did the Mwangi Center play in the life of the campus when you were a student?

“The Mwangi Center was a sanctuary for students of color from what was sometimes difficult about campus life. I spent a lot of time there because my friends spent time there, too. Not only students of color from the U.S., but also international students from the Global South socialized and had association meetings there. The meeting that led to the founding of the Smith African Students Association—of which I was the first president—was held there. We also planned the anti-racism protests at Smith in the late 1980s at the Mwangi Center.”

How did your time at Smith help shape your life?

“Smith was especially important in my life because it allowed me to have strong friendships with women from minority communities in the U.S. and from the Global South. It’s not often that college-age women from places as diverse as Pakistan, Turkey, Jamaica, South Africa, South Korea, the Dominican Republic, Canada and Kenya can form lifelong friendships. That was and remains a very important network in my life—professionally and personally.”

What impact do you see the Mwangi Center having at this particular moment in time?

“A transnational feminism is urgently necessary for the world. We need global citizens with both the analytical capacities and the personal networks, friendships and connections to create a more livable and just human future. I’m still in contact with most of my friends from Smith, although many of us have now returned to or live in countries other than the United States….If this is true of Smith alumnae generally, it means that the college—and especially the Mwangi Center—is an important platform for global possibility and personal relatedness.”

How do you see the center’s role evolving in the future?

“The students make the center. It will be whatever the women who use it need it to be. All the women who have found a home there have changed and shaped the center, and left something new as well as something old for the next generations. I’m as eager as the next person to see what future Smithies will make of the center—what they will do with and within it.” 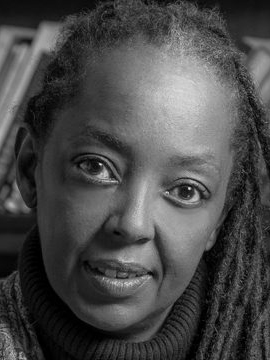 Jennifer Ho—professor of ethnic studies and director of the Center for the Humanities and the Arts at the University of Colorado Boulder—will deliver a Presidential Colloquium on fighting anti-Asian racism at 7 p.m. Wednesday, May 5.

Carmen Yulín Cruz—the former mayor of San Juan, Puerto Rico, who came to national prominence in 2017 as an outspoken advocate for federal support to Puerto Rico in the wake of Hurricane Maria—will deliver a Presidential Colloquium on “Leadership for a New Democracy” at 7 p.m. Wednesday, April 28.

Political philosopher Michael Sandel—a Harvard professor whose popular course on “Justice” has reached tens of millions of people on television and online—will deliver a Presidential Colloquium on “The Tyranny of Merit: What’s Become of the Common Good?” at 7 p.m. Tuesday, April 20.

"A narrative should serve as a framework for empirical analysis and not as a signal of moral virtue," notes Prof. Donna Robinson Divine in a piece on how media cover Afghanistan and the Biden administration. https://t.co/ol3OJqe2Ph https://t.co/es8PyOXh5n

Prof. Ruth Ozeki '80's novel is alive with the voices of things that don't usually have one: spoons, windows—even the book we hold in our hands. https://t.co/lDxdgxDU3y https://t.co/49Qzm9D2ya