When Mariah Ollive ’18 signed up for an introductory course in organic chemistry this semester, she expected to spend most of her time reproducing the results of previous lab experiments.

Instead, Ollive and her classmates in Organic Chemistry II have been designing new experiments that could yield results for treating a neglected tropical disease that afflicts more than 100 million people around the globe.

“I like the way we are in charge,” said Ollive, of the experiments students have been conducting with a plant-based substance called neurolenin D, which is thought to have potential for fighting the mosquito-born illness lymphatic filiariasis.

“It’s exciting,” Ollive added. “I’ve learned so many new procedures and I’ve learned how to think differently about things in the lab.”

“Course-based research is something we’ve been experimenting with for a number of years,” said Patricia DiBartolo ’89, Caroline L. Wall ’27 Professor of Psychology and faculty director of the sciences. “Now, we’re focusing on how we can scale up these models so that we can offer research experiences to as many students as possible.”

The chemistry teaching labs are organized so that students design and run their own experiments.

“The traditional lab sequence in chemistry is that the labs are pre-planned and students replicate experiments that have already been done—so it’s not true research,” explained Gorin. “But in our labs, students are doing totally new stuff. We don’t know what their results will be.”

“We did surveys that showed students were more excited about organic chemistry than in the other lab sections—and not just those who got A’s in the course,” Shea said. “We know that early exposure to research helps increase student persistence in STEM.”

Shea’s pilot course was built on work done by Steven Williams, Gates Professor of Biological Sciences at Smith and a leading researcher in the field of neglected tropical diseases.

Using the results of a senior thesis project by one of Williams’ students, Kristine Trotta ’14, Shea’s class extracted neurolenin D from its plant source and then spent six weeks analyzing reactions on the compound to make new molecules for testing in Williams’ lab. The tests showed whether the new compounds were effective in killing disease-causing parasites. 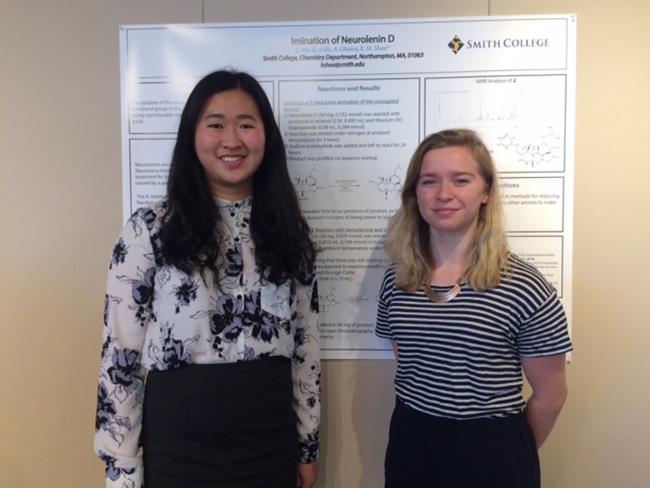 Cindy Hu ’19 and Grace Mills ’19 with the poster they created showing the results of their experiment with neurolenin D.

This semester, students in the Organic II labs are also conducting original experiments that could lead to progress in developing new drug treatments for lymphatic filiariasis and other neglected tropical diseases.

Working in teams, students began by reviewing research literature and sharing the sequence of their planned experiments to help reveal potential design flaws.

At one of those initial sessions, Shea advised students to try to anticipate all of the reactions that might occur during their experiments—while at the same time remaining open to surprises.

“Remember, we can predict all we want on paper, but you need to run the reactions to see what actually happens,” he said.

Although she had previous experience as a Smith Summer Research Fellow, Anisha Tyagi ’18 said creating an original experiment with neurolenin D has taught her more about the scientific process.

“I’m honestly not sure our reaction is going to work,” said Tyagi, as she donned a white lab coat and safety glasses before a recent lab session. “But this is still important if it helps other people not make the same mistakes. It’s good to be able to fail and still make progress.”

Veronica Hernandez ’18 said the course has sharpened her ability to understand and make use of primary sources.

“We had to read a lot more primary literature before designing our experiment,” she explained. “That’s maybe the biggest difference for me in this lab.”

Finding enough time for students to complete their trials with neurolenin D is one challenge facing the teaching labs.

“Some of these experiments run over several days,” Shea noted.  “One of the most frustrating parts is that students don’t always get to go back and try a reaction again if it fails the first time.”

Gorin said students in his section are “uniformly excited about the open-endedness” of the teaching labs.

“The big question now is to figure out how this impacts their trajectory in STEM,” he added.  “How can we look to extend this model further?”

Shea has recently been awarded a grant from the Camille and Henry Dreyfus Foundation to support the teaching labs—including funding for three student Summer Research Fellows. He also has submitted a research paper about how the labs help encourage and sustain student interest in STEM.

For biochemistry major Natalie LaBossier ’19, the key benefit of this semester’s Organic II lab has been increased confidence in her skills as a researcher.

“The most important thing I’ve learned is how to apply previous knowledge to create new knowledge,” she said. “I always wondered how people come up with ideas for doing experiments. In this situation, I feel like I’m the expert.”

"I love every time that window opens a little for me to get a peek at the neat stuff, and knowing that I'm an integral part of the science happening, and of the mission of getting more women into STEM fields," Smith's Suzanne Palmer on writing sci-fi. https://t.co/mierrYK7Xg https://t.co/B6PQepH9I5