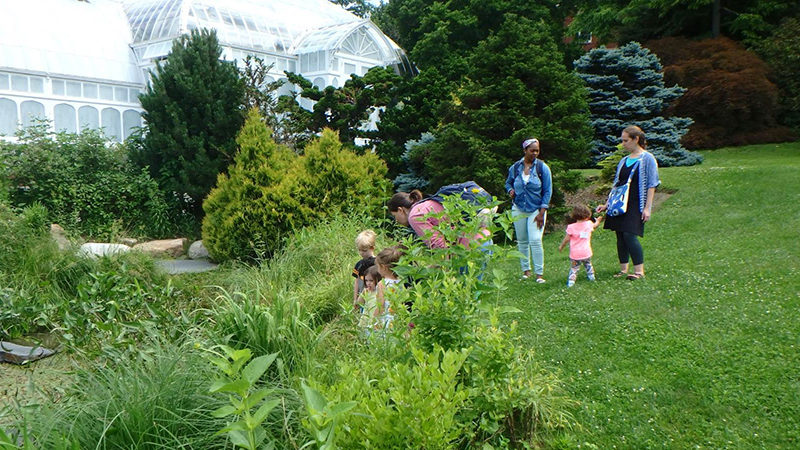 The Smith campus and downtown Northampton offer rich resources for the children and educators at Fort Hill. The classrooms frequently plan field trips to visit parents or one of the many nearby attractions. These excursions support the curriculum and offer opportunities to develop and maintain relationships with families and the broader community.

The early childhood program at Fort Hill serves as a laboratory for Smith College. Students participate in the program in a variety of ways: observing and engaging with children to complete course requirements, participating on student and faculty research projects, and working as student assistant teachers.

Smith College students and faculty have collaborated with the children and educators at Fort Hill on a number of research projects. A recent example is the development of a test to assess early language development, delivered via a computer tool that does not require a skilled examiner to administer.

Other examples of academic collaborations include:

For more than 25 years, Smith College professors Jill de Villiers and Peter de Villiers have conducted studies of language development and related cognitive achievements in preschool children, often enlisting the help of the children at Fort Hill. They generally show children picture books they have made with specially designed questions, or play games with puppets to see if they can teach the puppet to "talk right," or ask them to guess what someone will do next in a story we act out or show on video. Some of the work is "pure" science, but much of it has very real practical outcomes.

All studies must pass by the college's Institutional Review Board for the Use of Human Subjects, who make sure that the studies meet the requirements for the protection of the rights and confidentiality of the children.

Language and Theory of Mind
Fort Hill was the site of a longitudinal study of 3 and 4 year olds that demonstrated that certain language gains were necessary before children could reason about another person's beliefs and knowledge. This work was extended across several languages, and confirmed with deaf children who often have delayed language development if they are learning oral language. The de Villiers are still pursuing how language assists thinking in this important domain, and have a new grant to study a very large group of low-income preschoolers in Texas and Florida over several years as part of a curriculum intervention project.

They are also attempting to develop intervention materials that might help children with special difficulties, such as in autism.

African American English
For many years the de Villiers have been involved in studying how African American children acquire the special properties of the dialect spoken by many African Americans. They had a contract from NIH to develop a suitable language assessment test that would not be biased against dialect speakers, but pick out children who had language difficulties. In developing this test, they piloted many of the items on children in the Smith day care centers, though the test was standardized on over 3,000 children throughout the country.

Language Acquisition
For all of their time at Smith, the de Villiers have studied language acquisition in the preschool years, with a focus on semantics, syntax and pragmatics. Fort Hill was the site of a longitudinal study of how children understand complex questions, of how they understand quantifiers like "every", of how they produce relative clauses, of article...all of which have contributed enormously to their understanding of how English develops.

In recent years, the CECE has served as the community partner for EGR100, Engineering for Everyone, an introduction to engineering through participation in a semester-long team-based design project. Students develop a sound understanding of the engineering design process, including initial problem identification, brainstorming, background research, establishment of design criteria, development of metrics and methods for evaluating alternative designs, prototype development, and proof of concept testing. Student teams worked with clients (teachers) and users (children) from the CECE to design experiential learning tools for preschool children.

Examples of projects include:

Building Big
Preschool children are fascinated by building large structures out of any available materials. The act of handling and constructing large objects contributes to their sense of power and autonomy, and using these structures encourages creative, imaginary play while at the same time teaching them the concepts of stability, strength, and aesthetic appreciation. The aim of this project was to design and fabricate a building “kit” to enable the children to safely construct large structures. The kit itself was required to be portable and could not require a tremendous amount of storage space.

In the Dark
A common medium for preschool children to explore is light. The aim of this project was to construct a physical space that would serve as a large dark space or 'room' within a classroom in which children could explore the phenomena of shadow and light. The space needed to be portable and allow multiple children (and teachers) to use it at the same time.

Outdoor Studio Space
An important space at the CECE is the art studio where children are able to explore multiple artistic media and modes of expression. In the warmer months, there is often a desire to do some of this work outside, and yet there is no good space for doing this. The CECE is currently going through a new playground redesign, and there will be an area in the new playground space that would be suitable for setting up some form of outdoor art studio. The goal of this project was to design a series of portable, modular, multipurpose flat surfaces that can provide multiple levels of flat space for art exploration outdoors.

During this special studies, students from four disciplines (studio art, education and child study, engineering and landscape studies) collaborated in the formal design process to benefit the new playgrounds at Fort Hill. Through charrettes and reviews, small groups worked together to design a climbing structure for toddlers; a water feature for infants to preschoolers; and storyboards illustrating and describing the rich history of the site, from Native American fort to silk cocoonery to Lyman family estate.

Students researched the rich history of the site, did precedent analysis, learned safety regulations, learned about the development of the young child, and came to understand the pedagogical implications of the designs.

It was an opportunity for guest lectures given by the participating faculty and visiting professionals. Lectures included the evolution of playground design, materials and the structural analysis (loads, etc.) of the playground structures.

“Our museum visits were among our students’ most favorite and memorable activities of the year, providing children with extraordinary experiences beyond our classroom walls. We look forward to our return visits to explore the museum’s beautiful benches and to see what new interests are sparked by being in this inspiring space.”