“At Smith, We Call It Leadership” 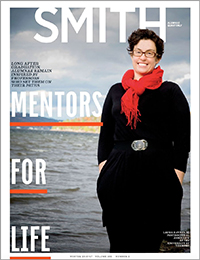 A week after the U.S. elections, The New York Times published an op-ed I wrote about women’s leadership. While many people have attributed Hillary Clinton’s loss to Donald Trump to her actions in public life, or to America seeking “change” at any cost, I argued that the outcome was as much about sexism as anything else. Even 50 years after second-wave feminism, the glass walls of unconscious gender bias box women into traditional roles and limit our opportunities. In social psychology, we talk about this phenomenon as “coercion to the biosocial mean”: society’s tendency to punish people who deviate from culturally expected patterns or push boundaries.

Within hours of the piece appearing online and in social media, the column generated an outpouring of comments and emails. Smith women and others, across political and generational lines, picked up the discussion in urgent, personal ways. I had hoped the piece would start conversations; I hadn’t expected it would hit a nerve.

The column was like a relief valve, some respondents said. It gave voice to what they had been feeling but hadn’t seen articulated. “Made me feel so much better that she called it sexism” one posted on Facebook. “You've expressed eloquently what we all feel,” said another.  “Thank you,” another said, for “expressing what I and many others feel about how Hillary Clinton was held to a different standard precisely because she is a woman.”

“I am faced daily with sexism and misogyny, but Smith helped prepare me to be confident.”

The essay’s examples of gender coercion resonated with others. The last time someone called me bossy, I wrote, a term reserved for women alone, I simply replied: “At Smith, we call it leadership.” That sentence generated a lot of laughs but also recognition. “The truth about conflating bossy with leadership could be the story of my life,” one alumna wrote. “I am faced daily with sexism and misogyny,” wrote an alumna working in tech, “but Smith helped prepare me to be  confident … and work to break those glass walls despite the pushback I get from many of my colleagues.” Our wonderful Dean of Admission Deb Shaver tweeted: “Call me bossy anytime.”

Many expressed longing for the community they had known at Smith and gratitude that such community exists for our students today.. “Your comments are thoughtful and inspiring,” a 2016 graduate wrote, “and they make me wish that I were still at Smith during this election.” “This is such a tumultuous time,” another observed. “Students who are graduating will be entering a world that is unsettled and uncertain.” “I can't tell you how happy I am that Smith is still here, and still educating women,” one writer said. “May this never change.” A faculty member expressed hope that the op-ed would help our students “feel like Smith will always support their ambitions.”

Many in the Smith community rightly invested their pride and their hopes on the students today. The passion and activism of this generation of students is the silver lining of this election. A faculty member’s comment highlighted “sexism in Trump’s election and the fierce will to fight it by Smith students.” An alumna simply said: “We are counting on the incredible young women who are part of the Smith legacy.”

In the op-ed, I talked about opening my house to students on the Sunday after the election. There was no agenda; we gathered to be in community and listen to one another. Students spoke with particular urgency about the need to address the intersection of sexism and racism, Islamophobia, classism and other forms of hatred. That message resonated with alumnae as well. A recent graduate said she appreciated seeing an article “that is centered on the sexism of the election results but that also acknowledges the role that all those other ‘isms’ play in it.”

Not everyone embraced my argument. I received a few messages disputing the role of sexism in the election or questioning my taking what they perceived as a partisan position. I explained that I criticized Trump’s rhetoric, but not the Republican party.

To accompany the op-ed, the Times selected a 1948 Life magazine photo of Smithies in class. It appeared over and over as the post circulated on Facebook and Twitter. I would have preferred an image of students today, but then would not have had the pleasure of seeing this very moving post from filmmaker Nina Davenport:

“My mother, Kitty Perkins [Davenport ’51], is sitting in the front row of the photo, wearing a bandana in her hair and a red skirt. I know this because she saved the original Life Magazine the photo was published in—part of an article about so-called “co-eds" on college campuses, i.e. women. My mother died in 2006. She loved Smith College and spoke about it all the time. She wanted me to go to a women’s college, too, and over the course of my life I've come to understand why she valued that space for women so much.”