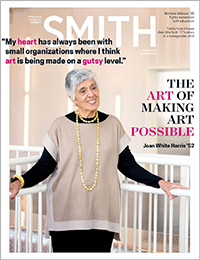 I have become increasingly concerned about the way media pundits report campus protests at colleges and universities, including Smith. In covering last fall’s protests about racial injustice, a number of commentators mocked and disparaged students, often by cherry-picking examples of protest methods to support sweeping criticisms about young adults today.

Much of the criticism has centered on students’ views of free speech. Students today hold myriad and thoughtful views of free speech. As I noted in a column last fall for The New York Times, some adhere to a strict interpretation of the First Amendment: All speech must be free. Others assert that free speech is not truly available to all, especially members of marginalized groups.

There is evidence, in fact, that the millennial generation holds different views about speech than their parents. A recent study from the Pew Research Center found that 40 percent of millennials—today’s 18- to 34-year-olds—approve of “limiting speech offensive to minority groups.” In a related finding, only 27 percent of millennials believe the media “has a positive effect on the way things are going in this country today,” a drop of 13 percentage points from just five years ago. For me, this difference of opinion provides an opportunity for discussion, which is what we have done on the Smith campus, versus an opportunity for uninformed attacks on the future leaders we are educating.

Generational difference should not be interpreted as generational weakness. Counter to the popular narrative that students today fear opposing perspectives, my experience is that Smith students want their college to be a place where uncomfortable ideas and divergent positions are debated openly. They want robust, rigorous discourse. Most are seeking to achieve a climate of principled disagreement, recognizing that this work can be hard and uncomfortable.

Sophian editor Michelle Lee and her colleagues took a strong stand when students at Wesleyan University voted to defund the student newspaper for publishing a conservative op-ed. “Freedom of speech and, by extension, freedom of the press, is fundamental in progressive dialogue,” the Sophian affirmed. “College newspapers publish pieces intended to not only inform, but also to provoke. Without differences of opinion, communities absorb a social and political inertia that stagnates the potential for new ideas.”

To elicit those new ideas, the editorial board issued calls for more contributors, actively seeking to diversify the Sophian’s news content and perspectives. “We invite input in the form of articles and editorials,” they wrote, “and especially welcome feedback and suggestions from traditionally underrepresented voices about ways to improve this space, both in coverage and in structure.”

In a similar spirit, Smith’s newly formed Bipartisan Coalition, a student organization of Democrats, Republicans and others, describes itself as “a group of not like-minded individuals committed to uniting our campus through elevated political discourse.” Co-led by juniors Tessa Meyer and Katie Hitchcock-Smith, the group meets to deepen understanding of issues such as immigration, women’s health and public education through positive political debate. The Boston Globe in January featured the group’s efforts to create a forum for civil political debate at a time when so many campuses are divided on critical issues of race and speech.

Not surprisingly, faculty members across the country are leading important work on speech issues. This year, a number of college faculties, including ours, have begun to reflect on the state—and purpose—of free speech on campus, a conversation galvanized in part by a widely publicized affirmation of freedom of expression issued by the University of Chicago. When our faculty launched that conversation at a meeting in late December, it was one of the most engaged faculty discussions I have experienced at Smith. Faculty members articulated their strong commitment to “an environment that holds the space for dissent,” and their obligation “to teach and model principled disagreement.”

At Smith, as at campuses everywhere, we have much work to do in realizing our aspirations for racial justice as well as our shared values for speech and discourse. As one of my faculty colleagues observed, “This generation has raised the bar on how things can be better.” Will mistakes be made? Of course. This is true of all social movements. As New York Times columnist Charles Blow observed, in this movement, as in those that came before, “There will be missteps, tactical errors, assailable symbols and an army of detractors and fickle allies ready to seize upon each and exploit them.”

This generation is raising real and important issues about inequities on our campuses and in society at large. If we focus merely on criticizing student activists, if we hold today’s movements to the paradigms of prior generations, we risk missing the point.