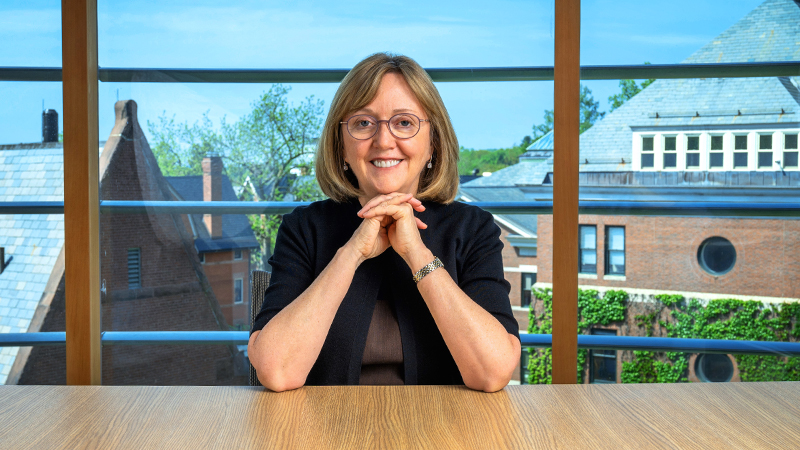 Since assuming the Smith presidency in 2013, McCartney has led a strategic planning effort that is resulting in important new academic and cocurricular programs that expand opportunities for women. They include the Jill Ker Conway Innovation and Entrepreneurship Center; the Wurtele Center for Leadership; a design thinking laboratory; innovation grants for students, faculty and staff to work on complex problems such as equity and inclusion; and a network for women C-suite leaders. She has launched important initiatives on college access and affordability and campus discourse.

McCartney has forged education partnerships that have resulted in new programming, including a MOOC, or massive open online course, on women and activism with edX, the Harvard/MIT platform. In 2016, Smith became the first liberal arts college to offer a major in statistical and data sciences, funded in part by the Mass Mutual Life Insurance Company. Forty percent of Smith women now major in one of the STEM fields, double the national average for undergraduate women.

Women for the World: The Campaign for Smith, which McCartney led to its culmination in 2016, raised $486 million, setting a record as the largest and most successful campaign ever undertaken by a women’s college. Notably, the campaign raised close to $130 million for financial aid, including 103 new endowed scholarships.

Under McCartney’s leadership Smith has engaged architectural designer Maya Lin to re-envision the historic Neilson Library in the context of Smith’s renowned Frederick Law Olmsted-designed campus. The $110 million project is scheduled for completion in late 2020.

Previously McCartney was dean of the Harvard Graduate School of Education (HGSE)—only the fifth woman dean in Harvard’s history—a position she held from 2005 through 2013. A signature accomplishment of her tenure was the creation of a three-year doctorate in educational leadership developed in collaboration with the Harvard Business School and Harvard Kennedy School. She also developed a Ph.D. program in collaboration with Harvard’s Faculty of Arts and Sciences. Other accomplishments include dramatically increasing fellowship support for doctoral students, establishing the Center for the Developing Child and forging partnerships with local school districts.

An authority on child development, McCartney has conducted research on childcare and early childhood experience, education policy and parenting. She has edited nine volumes and written more than 160 journal articles and book chapters. Much of her research has focused on a 20-year longitudinal study of 1,350 children and their parents on the effects of child care, funded by the National Institute of Child Health and Human Development, for which she served as one of 10 principal investigators.

A thought leader on issues of gender, education and parenting, McCartney publishes essays and letters in The New York Times, The Wall Street Journal, Inside Higher Ed, Worth magazine, CNN.com, The Boston Globe and The Huffington Post.

As a professor at Harvard and at the University of New Hampshire, McCartney taught undergraduate and graduate courses on child development, statistics, social policy for children, social development, attachment theory and early childhood education. At UNH, she directed the Child Study and Development Center, a nursery school and child care center for 140 children from six weeks of age through kindergarten. She continues to teach in professional education programs and was the founding director of HGSE’s Women and Leadership program for women in the K–12 sector.

McCartney has lectured and consulted all over the world. She delivered education policy addresses to the Ministry of Education in Chile, to the president of Mexico and to policymakers at a UNESCO conference in Thailand. As dean of HGSE, she consulted with the University of Johannesburg, South Africa, on the establishment of a center for training school principals. She has spoken at Cambridge University, Japan Women’s University, East China Normal University and an early childhood institute in South Korea, sponsored by the Samsung Foundation.

McCartney is the recipient of numerous awards. She is a fellow of the American Academy of Arts and Sciences, the National Academy of Education, the American Educational Research Association, the American Psychological Association and the American Psychological Society. She was the recipient in 2009 of the Distinguished Contribution Award from the Society for Research in Child Development. The Boston Globe named her one of the 30 most innovative people in Massachusetts in 2011, she received the Harvard College Women’s Professional Achievement Award in 2013, and the Boston Business Journal named her one of its Women of Influence in 2016.