Physics professor Nathanael Fortune begins his climate change lecture by talking about overflowing bathtubs, only in this case it’s not water overflowing but carbon building up in the atmosphere. Carbon dioxide levels are rising for the same reason a tub overflows: “If you fill it faster than it can drain, the level in the tub is going to rise.”

Fortune speaks often at public climate change awareness events and urges political candidates, especially at the Massachusetts State Legislature level, to address climate change, if elected. He has taught physics at Smith since 1994 and serves as an adviser for Smith’s climate change concentration. In his intro to physics course, he teaches climate change by investigating the links among fluids, waves, electricity and magnetism, culminating in how rising carbon dioxide levels lead to rising planetary temperatures. “Climate scientists are as certain that global warming is a real, human-induced threat and that our burning of carbon-based fuels is the cause of this increase as we are that smoking causes lung cancer,” Fortune said. “We are the reason the carbon cycle is currently out of balance.”

And “balance” is an important concept, he noted. If there were no carbon dioxide in the atmosphere, Earth would be “a frozen ball of ice.” But the danger now is that Earth will become a planet free of ice. What’s more, the calamity of global warming also means an increasingly unstable climate. Whether civilization would survive such instability is an open question.

The real challenge for science education is to convey how the trajectory of global warming can be changed; it means understanding the link between carbon dioxide emissions and global warming. This is the reason for the bathtub analogy: to understand that it is time to turn off the tap. 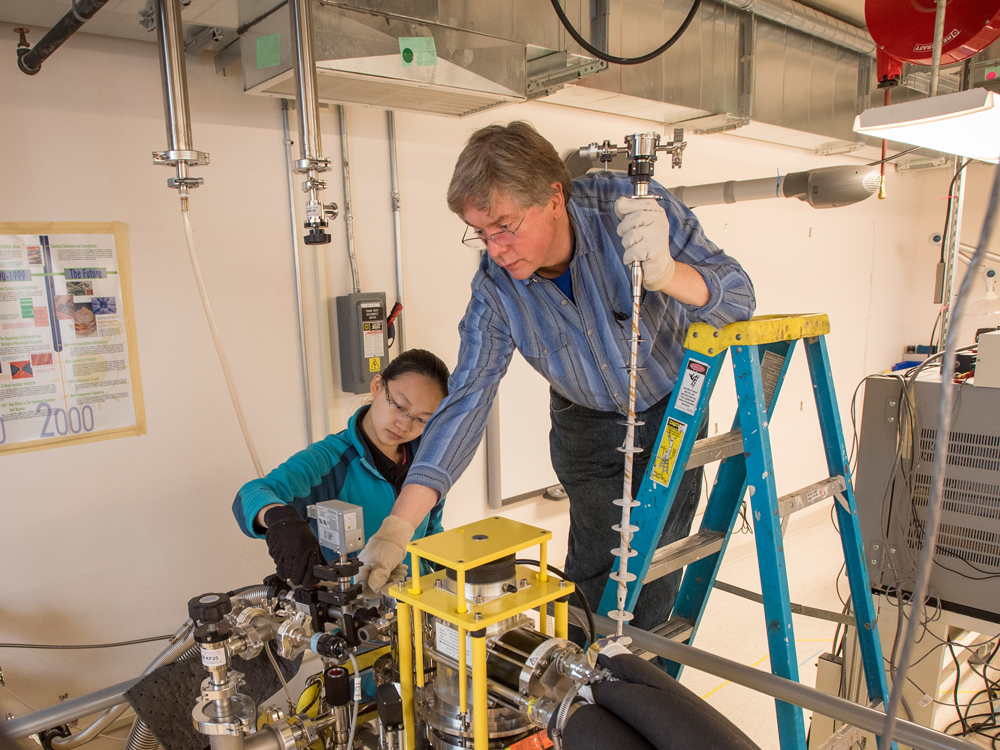 Nathanael Fortune and Lucy Liang ’17 remove a sample probe from Smith’s Helium-4 cryostat refrigerator as part of a series of experiments exploring the physics of two-dimensional superconductors in high-magnetic fields.

Fortune then offers a second, perhaps more disturbing, analogy: a leaky rowboat taking on water even as sailors work to bail it out. Unless they patch the holes, eventually the boat will sink.

“When it comes to climate, we are all in the same boat,” he said, “and if we seek to avoid a tipping point, then we have to patch the holes.”

Here is where Fortune’s forecast turns dire. “If we want carbon dioxide levels to stop rising tomorrow, then we have to cut emissions at our smokestacks, tailpipes and chimneys in half today,” he said. “But if we also want to lower dangerously high CO2 levels to a safer limit—and we should— then we need even larger reductions in emissions. Ultimately, we need to bring them to zero. And the closer we are to the tipping point, the faster we need to do this.”

Already the planet is as warm as it’s been since the dawn of civilization, when our climate last stabilized and farming became possible, Fortune said. But he finds reason for hope. “I’m an optimist in that we know what to do and how it could be done if we were to decide in time to do it. There’s already going to be climate disruption, there’s already going to be warming, and it’s going to affect us adversely. But we don’t have to go off the cliff,” he said. “The ravine—shrouded in the fog of our own doing—seems strangely attractive. But there’s still time to decide not to jump.”

This story appears in the Winter 2019-20 issue of the Smith Alumnae Quarterly.