News & Events for the Smith College Community
Research & Inquiry May 7, 2020

The SmithVent team of engineering alums, staff and faculty, are the winners of the CoVent-19 challenge to design an easily manufacturable ventilator for use during the coronavirus pandemic. The team's breathing device was chosen from more than 200 submissions to the competition launched on April 1.

"In two months we went from knowing nothing to having a functional prototype," said team co-leader Susannah Howe, director of Smith's Engineering Design Clinic."To see that trajectory in such a short period of time, with people who are volunteering their time on top of their other jobs is amazing and heartwarming and so rewarding."

“I could not be more proud of the SmithVent team for winning the CoVent-19 Challenge,” said Smith College President Kathleen McCartney. “This win speaks volumes about the power of a liberal arts education, grounded in experiential learning, to find innovative, collaborative solutions to complex, urgent problems. SmithVent is Smith at its best: a lasting example of our community coming together for the betterment of the world.”

Here is the story of how the team developed their winning design:

Team members had gathered from locations spanning the globe to mark a milestone: the successful completion of their design for a mechanical ventilator for use during the coronavirus pandemic.

Less than a week later, they had even more reason to celebrate, as they learned that the SmithVent design is one of seven finalists chosen from among more than 200 entries in the CoVent-19 ventilator challenge. The next round will identify a device for rapid manufacture and use on the front lines of the pandemic.

“This has been the best example of any project I’ve ever been involved with showing that many hands make light work,” said Susannah Howe, director of Smith’s Engineering Design Clinic, who put out the call for a Smith team in early April. “You’ve gone above and beyond what I expected with this amazing work, which we now want to share with the world.” 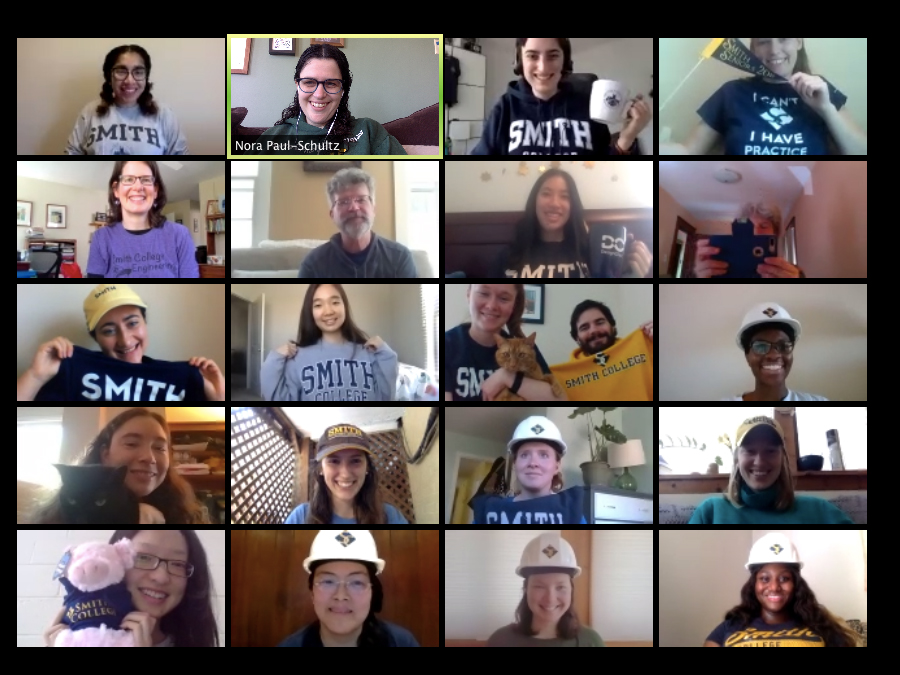 The month-long, open-source CoVent-19 competition was launched by a group of anesthesiology residents at Massachusetts General Hospital in partnership with Ximedica medical device company. When Howe—who is on sabbatical this semester—heard about the challenge at the start of April, she immediately reached out to the Smith engineering community. In less than 48 hours, she had a group of 29—including two Smith staff members and a member of the class of 2020—eager to work on designing a ventilator.

Operating on such a tight deadline and at a distance from each other was challenging, said Astrid Landeau ’15, co-leader and project manager for team SmithVent. “But it wasn’t as difficult as I thought because people were so motivated.”

At the Zoom celebration, Landeau shared slides showing how work on the project was broken down into five-day “sprints” and meticulously documented on Google Drive so that team members could easily pick up tasks where others left off.

“Twenty-five days ago, Sprint 1 started and we pretty much didn’t know what a ventilator was,” Landeau reminded the group. “Our medical research team soared into action, asking those hard questions and figuring out what we needed to do.”

From there, the team reviewed design options, settled on a plan for a pneumatic ventilator, and documented the complex system requirements for their toaster oven-sized device. Their submission also included 34 multiple design improvements that could be taken up in a second round of competition. 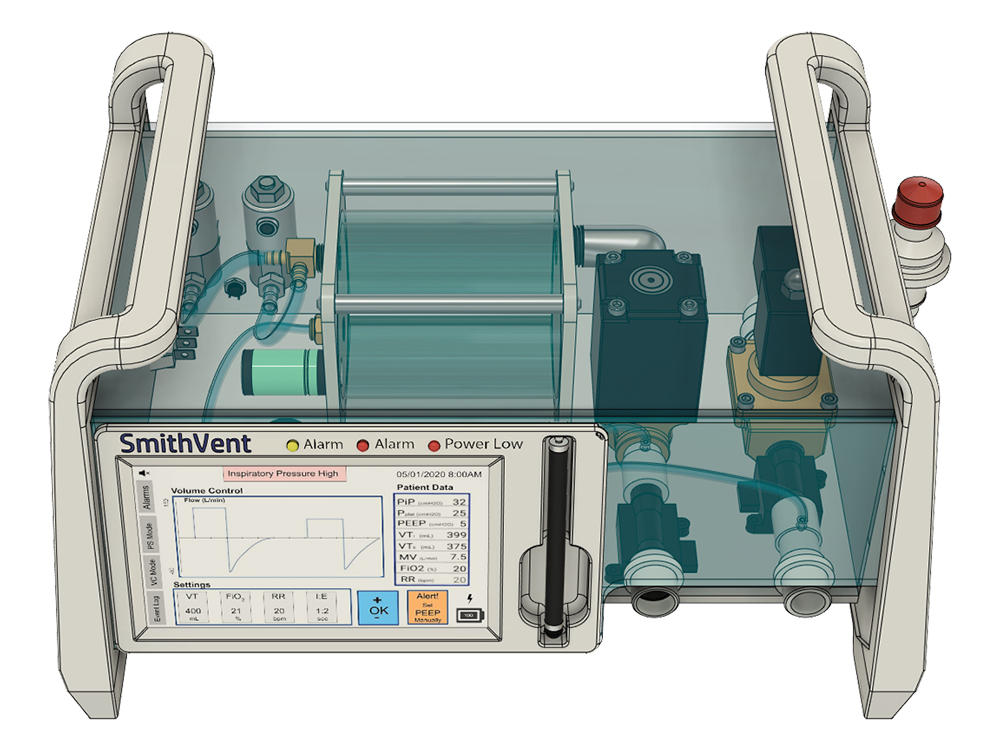 SmithVent members brought a variety of skills and experiences to the design challenge.

Paying close attention to evolving knowledge about COVID-19 was one of the keys to the team’s success in the first round, Howe said.

“We did a lot of research as a group on the pros and cons of existing ventilators and the needs expressed by the medical community,” she noted. “In COVID situations, it’s not always the case that ventilators have to do all the breathing. But people can also be on them for a long time. We weren’t just trying to make something that works, but something that works for people.”

At the Zoom celebration, team members sent each other virtual sticky notes with messages of gratitude for a challenge well met. Several said they plan to share the SmithVent design with co-workers as a model for how to successfully accomplish a deadline-driven challenge.

For Naylani Halpern-Wright ’15, who is studying for a master’s degree in the Netherlands, being on the team helped her feel connected during a time of unprecedented isolation.

“I have rediscovered what I learned during my Design Clinic experience at Smith: That Smithies are uniquely good at working together and communicating with one another,” she said. “I’m amazed and full of wonder at what we’ve been able to do together.”

What benefits is Qatar likely to gain from hosting the FIFA World Cup? Prof. Andrew Zimbalist weighs in on the economics of mega-events. https://t.co/OmItRtOtEh https://t.co/1GVUtKfbwu

RT @CarrieNBaker: I hope you can join us! @MsMagazine @smithcollege